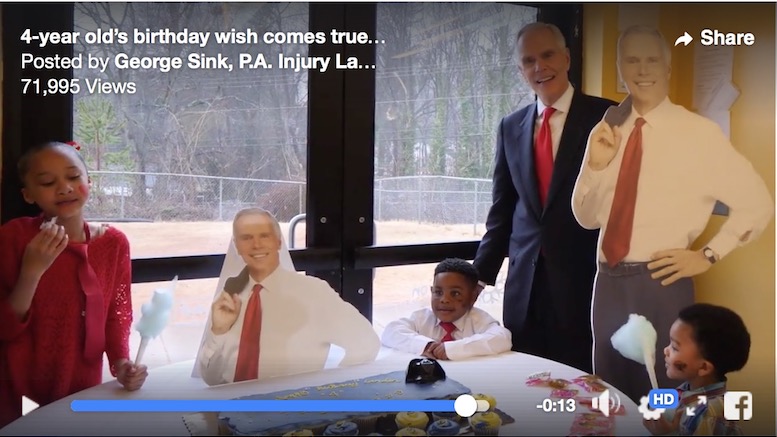 Hopefully no one slipped and fell during the party

Okay, it was weird enough that this happened once. See “Toddler Enjoys Lawyer-Themed Birthday Party” (July 31, 2015). Also, that was Louisiana, and people are … different there. But now we have a second and, apparently, completely unrelated example of this phenomenon, hundreds of miles away in Greenville, South Carolina.

The 2015 incident involved a two-year-old boy in Prairieville, Louisiana, who had apparently become obsessed with the TV ads of local plaintiffs’ attorney Morris Bart. “Bart, Bart, Bart, Morris Bart, Morris Bart,” the boy would repeat, according to his mother. “They were not his first words,” she claimed, “but they were a close second and third.” The family had a cake made with Bart’s face on it, and Bart sent over a signed picture, a T-shirt, and a life-size cardboard cutout of himself for the party. (Note to self: contact firm’s marketing department to request life-size cardboard cutouts of self to send to clients.) So that happened.

This time, it was a four-year-old South Carolina boy who has apparently become obsessed with the TV ads of local plaintiffs’ attorney George Sink. “I asked my son, ‘Landen, what type of party do you want?'” Landen’s mother said. “I want a George Sink party with all 9s!” he allegedly replied. The “all 9s” refers to the phone number in Sink’s local ads, 999-9999, which has clearly wormed its way into Landen’s brain, perhaps permanently. At four years of age, this boy has been able to absorb more information from the ads than in the kid in the Morris Bart case, though, to the point that he has apparently been going around threatening to sue people. According to the report, Landen’s mother said he “walk[s] around quoting the commercial and telling people he would call George Sink on them.” Well, there’s no fee unless you win, so why not?

Landen’s party was more elaborate than the Morris Bart affair, even though there was no cake with Sink’s face on it. There were 9s on the cake, as well as cupcakes with 9s on top and balloons shaped like the number 9. And again there were life-size cardboard cutouts of the lawyer in question. I guess this is a thing? (Note to self: contact firm’s marketing department to demand life-size cardboard cutouts of self to send to clients.) There were a bunch of kids all dressed up, the boys wearing power ties. And there were gifts, including the most important gift of all: the gift of George Sink. 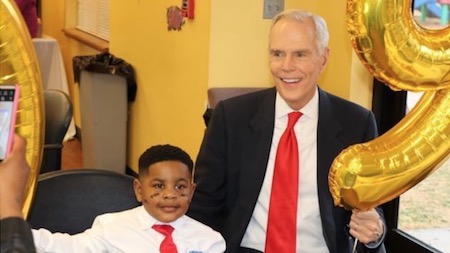 Unlike Morris Bart, who sent marketing materials but couldn’t make it himself, George Sink actually showed up for this lawyer party. (The family asked him to, he didn’t just crash it.) “I was just happy I could wish him a happy birthday in person,” Sink said. He was wearing the same tie as Landen, which according to this report wasn’t a coincidence—he brought red ties for everybody. “I wanted to show up because it’s just touching, it’s heartwarming, and I wanted to be here. It makes me happy to know that I made Landen’s 4th birthday one that he’ll always remember.” (Whether he wants to or not.)

The report includes plenty of party pics as well as a three-minute highlight video, all provided by the office of George Sink, P.A., Injury Lawyers. Is it a marketing piece? Sure. But hey—the family asked him to come to the party, and he was a good sport about it. He’s entitled to a little credit for that, I think. Yes, this’d be funnier if he had haughtily refused to go because he thought his time was “too valuable” for such nonsense, but he didn’t. Good for him, even if not for me. Of course, if this keeps happening, some lawyer eventually will haughtily refuse to go, and I will hopefully hear about that. So I have that to look forward to.

Also, the life-size cardboard cutouts. If I can’t get a bunch to send to clients, maybe I can at least get one to cast a shadow on the blinds so it looks like I’m working late.