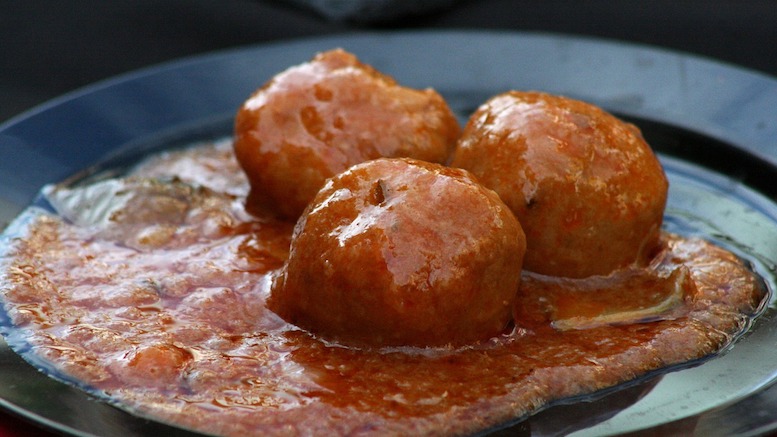 Police said the victim reported his meatballs missing and told officers at around 2:30 p.m. Monday that he saw Potter standing in front of his house with telltale smears of sauce on his face and clothing. The pot was found on the street.

But the local news outlet, the Wilkes-Barre Times-Leader, told a different story:

Murray [the victim] … called state police Monday to report a pot of meatballs was missing from his garage.

Murray claimed he arrived home and found Potter at his front door. Murray said Potter, whom he knows, had red tomato sauce all over his face and goatee.

After driving Potter to his Sugarloaf Township residence, Murray returned home and noticed a garage door was open and a missing pot of meatballs.

At least in evidentiary terms. But this account reverses the order of events, giving the tale a different flavor.

The first account suggested to me that there was some long-standing food-related dispute between two neighbors, one that Potter decided to escalate by stealing and eating Murray’s meatballs and then staking out a position in front of the man’s house, covered in sauce and waiting for Murray to notice, then daring him to do something about it.

I’m not sure what it is about this scenario that I find so hilarious. It reminds me of something in The Unexpurgated Code (affiliate link), an old book by J.P. Donleavy that is a guide to social climbing and manners for truly awful people. If you have been somehow disgraced, he wrote, and are sick of the neighbors staring at you because of it, you should post yourself in front of a window

read[ing] the newspaper over your martini as if nothing had happened. And throwing your head back with a few guffaws every time you turn a page will send them rushing to read their own papers. When they come back to stare at you again, be standing at your own window making a mute screaming face.

Which I still find hysterically funny. Here, too, I guess it’s the idea of Murray glancing out his window and seeing his nemesis Potter standing there mutely, covered in red sauce, having stood there for God knows how long waiting for just this moment.

Because then what can Murray do? Maybe he calls the police, but by the time they arrive you’ve eaten or cleaned up the rest of the evidence, so he looks like a nut for calling the police about meatballs. Or else he backs down and does nothing—the ultimate humiliation. A perfect plan.

The second account is less funny, because it at least suggests something other than the kind of completely normal insanity caused by living in proximity to other human beings. See, e.g., “No Winner in Tomahawk-Speargun Battle” (Nov. 30, 2011). In this version the two are acquainted but not enemies, and in fact there is enough goodwill that Murray offers to drive Potter home. Only after doing this good deed does he return home to find he has been burgled, realizing only then that he has just helped the perpetrator escape even though the evidence of his crime was plain to see.

That moment of realization is still funny to me, just not as funny as the first one.

And it’s still possible that Murray and Potter are long-time adversaries, and that this was just a different kind of devious and diabolical plot by Potter to cause Murray distress in a completely ridiculous way, escalating some utterly nonsensical dispute.

Unless and until further details surface, at least, I wish to go on believing that.

How to Avoid Jury Duty, #10: F-Bomb After Being Selected

Defendant’s Attempt to Arrest Judge Does Not Go Well