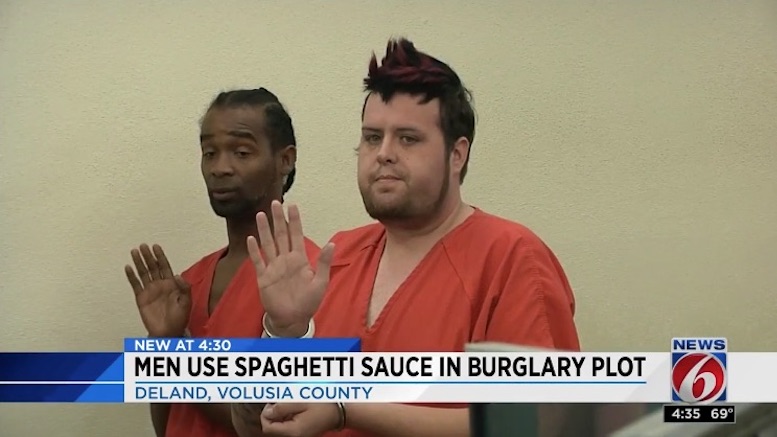 "OK, where are the guys accused of spaghetti arson? ... That's what I thought."

I had no idea what a “bull onesie” would look like, but I assumed it would be ridiculous, and I was right. And because a guy wearing one tried to burn down a trailer using a pot of spaghetti sauce and a washcloth, I assumed this happened in Florida. I was right about that too.

According to News 6 in Orlando, two men are “accused of breaking into the home of a man they both dated, stealing several items, then leaving spaghetti sauce boiling on the stove with a washcloth placed near the burner in an attempt to start a fire.” The story gets even weirder, though, in ways that require you to watch the video below in order to fully appreciate. I will just give you the highlights.

The report says that the victim, who wished to remain anonymous, called 911 Tuesday morning because “the security cameras in his home”—which appears to be a large-ish trailer home—”detected motion,” and he noticed that someone had put a towel over one of the cameras. Police “was there in no time,” said the man—who, as you will see, did agree to talk on camera, but apparently on the condition that only his shoes would appear, so he is represented by what look like a pair of talking Air Jordans. That’s not how I would have chosen to frame the shot, but I salute the reporter who agreed to it. 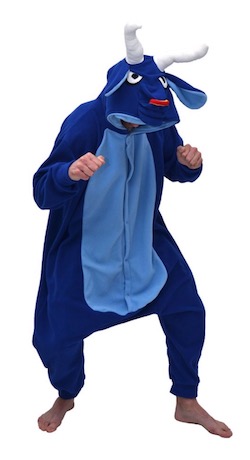 One of many ridiculous examples (image: aFREAKa Clothing)

Deputies stopped a Lincoln Navigator they saw attempting to leave the area. The two men inside admitted they had been inside the home, but claimed that one of them lived there (or until recently had, I assume) and that they were just stopping by to “pick up some clothes and other items.” Based on what deputies saw in the vehicle, the items included a window AC unit, a flat-screen TV, a marijuana grinder (though they might have had that with them to start with), and, oddly, an empty jar of Ragu spaghetti sauce.

More oddly, one of the men is said to have been wearing a “bull costume onesie,” but it’s unclear whether he took that from the home or had brought it along as a disguise, not that either of those things makes a whole lot of sense.

Deputies detained the men and investigated the home, which “reeked of smoke.” The smoke was emanating from a pot of spaghetti sauce on the stove (likely Ragu, but the lab is probably still working on that), with a white washcloth either placed or taped near the burner. The washcloth was the source of the smoke. This seems to have been an attempt to start a fire that would look accidental, but the shoes ridiculed that plan. “He was trying to make it look like I left the stove on,” the shoes said, “but who gets up at 2 a.m. and fixes sghetti?”

That’s what they said: “sghetti.” News 6 spelled it “sketti,” and I guess there’s no approved spelling, but I like mine better.

The timing of all this is unclear, as is whether the shoes were home at the time of the break-in. The report doesn’t make their whereabouts clear. And it says they made the 911 call at 7 a.m., not 2 a.m. But I guess we don’t have to solve that particular mystery, since nobody would get up at 7 a.m to fix sghetti, either.

Sadly, this incident seems to have resulted from a failed relationship between one or more of the men. The shoes appeared to blame one of the suspects in particular, but expressed puzzlement as to why he would have done this. “I’ve let him use my car for four months,” the shoes said, sarcastically. “Maybe he’s angry about that. Or maybe he’s angry because I gave him $150 to fix his teeth.” No good deed goes unpunished, that’s what I always say.

The suspects are charged with burglary, grand theft, and arson.

The bull-onesie wearer was being held without bail, not because of the onesie but because he was already on probation, according to the report. Whether that crime was onesie-related, it did not say.

Court: No, It Wasn’t “Reasonable” to Lock Grandma Up With Male Inmates

May a Magistrate Judge Ethically “Dance With the Stars”?