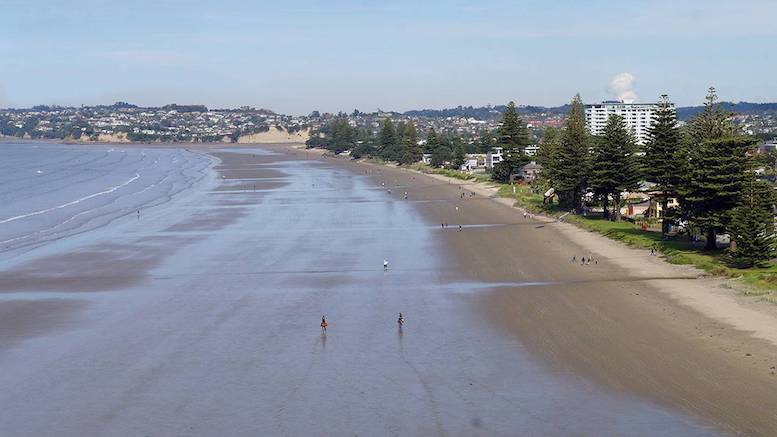 The report says Auckland Council wanted to build a 600-meter seawall in the northern part of the beach to prevent erosion, a plan that has been debated since a storm in 2013 caused significant damage. As is often the case, plans likely to affect the environment have to be approved by the appropriate public authority, which in this case was Auckland Council—or, at least, a panel of commissioners designated to review such plans. Because the panel works for the Council, it seems fair to say, as the Herald did, that “[t]he council had applied to itself, as the consenting authority,” for permission to build the seawall, which it believes is the best way to address the problem.

But it then disagreed with itself. Last November, the commissioners rejected the proposal, concluding in their report that a seawall wasn’t absolutely necessary to protect the beach, and so the need for one didn’t outweigh potential drawbacks such as the cost and the proposed wall’s “visual impact.”

And now a brief digression while I object to “visual impact.”

First, I think the word “impact” should usually be reserved for one physical thing striking another. Often people use “impact” when they mean something like “effect” or “influence.” The OED does list this as a secondary meaning, so it’s not wrong, but the examples are mostly things like “the impact of barbarian conquest” or “Gandhi made such an impact on me that….” Fine. But not, for example, “this PowerPoint will really impact the audience.” Oh, are you Gandhi or the Huns? Then no, it won’t. (Also, “impactful”—some seem okay with it, but personally, ugh.) “Visual impact” probably bugs me because it is so far from the physical sense of the word. But it does.

Second, here “visual impact” is a euphemism, and those generally suck. What first bugged me was the term “visual dominance,” which the commissioners didn’t use but this report did. In psychology, it means the hypothesis that visual stimuli tend to be far more important than others—animals respond more strongly to what they see than what they hear or feel. That sort of applies here, as does “visual impact,” except that here we’re only talking about one kind of “visual impact”—the negative kind. That is, people think the wall would be ugly. Ugly. That’s the term you’re looking for. I mean, if you want to describe a person as “exhibiting a negative visual impact” or an “unfortunate visual dominance,” I guess I won’t stop you. But this is a wall.

Anyway, the council believes the commissioners’ decision understates the need and overstates the wall’s negative visual impact, and has appealed. A hearing is set for April 9.

And the first thing the court will have to decide is whether Auckland Council can appeal what is effectively its own decision. Now, I admit that one of the few things in which I am not an expert is the New Zealand Resource Management Act 1991. But I have read part of it. According to the commissioners, they acted pursuant to Section 34 and Section 34A of the Act, which say a governmental authority may delegate any “functions, powers, or duties” under the Act to a local board, employee, or hearings commissioner. If it does, then—

—which is what “delegation” means, basically. You have declared that another person or entity can legally act on your behalf, subject to any limitations you put on the delegation. Because the council submitted this decision to the commissioners in the first place, it seems fair to assume it had delegated its authority over such decisions to them. But here’s the problem with delegating authority: you gave away the authority. It could have retained veto power or said all the commission would do is make reports. But that’s presumably not what happened here, because otherwise the council wouldn’t be appealing the decision.

So I think that means the council probably is effectively appealing its own decision.

As the headline suggests, this is by no means the first time a city council has sued itself, or tried to. The most ridiculous example is probably Islington’s appeal of a parking ticket a city officer gave to a city vehicle. Actually, it appealed twice: first to itself, and then again after it ruled against itself. After it lost again, it asked for an award of costs, apparently arguing that its appeal against itself had been frivolous to begin with.

It didn’t win that argument, either, although I guess you could also say it didn’t lose.