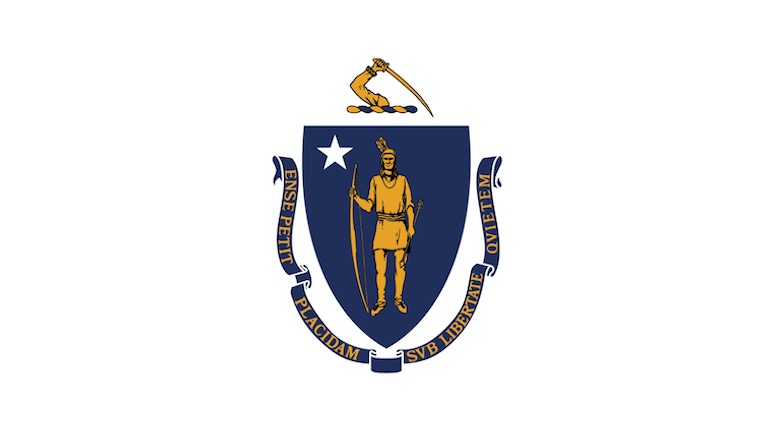 State flag of Massachusetts (since 1901, anyway)

Feast your eyes upon the oath of office as it appeared in the original Massachusetts state constitution—and you’ll need both, because it was almost 300 words long:

I, [name], do declare, that I believe the Christian religion, and have a firm persuasion of its truth; and that I am seised and possessed, in my own right, of the property required by the constitution as one qualification for the office or place to which I am elected…. [I] do truly and sincerely acknowledge, profess, testify and declare, that the Commonwealth of Massachusetts is, and of right ought to be, a free, sovereign and independent state; and I do swear, that I will bear true faith and allegiance to the said commonwealth, and that I will defend the same against traitorous conspiracies and all hostile attempts whatsoever: and that I do renounce and abjure all allegiance, subjection and obedience to the king, queen, or government of Great Britain, (as the case may be) and every other foreign power whatsoever: and that no foreign prince, person, prelate, state or potentate, hath, or ought to have, any jurisdiction, superiority, pre-eminence, authority, dispensing or other power, in any matter, civil, ecclesiastical or spiritual, within this commonwealth, except the authority and power which is or may be vested by their constituents in the congress of the United States: and I do further testify and declare, that no man or body of men hath or can have any right to absolve or discharge me from the obligation of this oath, declaration, or affirmation; and that I do make this acknowledgment, profession, testimony, declaration, denial, renunciation and abjuration, heartily and truly, according to the common meaning and acceptation of the foregoing words, without any equivocation, mental evasion, or secret reservation whatsoever — So help me, God.

All the renouncing and declaring and abjuring probably seemed appropriate then, what with the rebellion and all, but eventually people tired of it. At least I infer this from the 1821 amendment that slashed it by an order of magnitude:

I, [name], do solemnly swear, that I will bear true faith and allegiance to the Commonwealth of Massachusetts, and will support the constitution thereof. So help me, God.

Who’s responsible for that first draft, you may be asking, and since I looked it up, I’m going to tell you regardless. The state legislature’s website explains that shortly after the Declaration of Independence, the representatives all got together and drafted up a constitution for “the State of Massachusetts Bay.” After laboring for many months, the authors proudly unveiled their creation to the voters in 1778. The voters hated it.

To be fair, this may have been due to the belief that constitutions should be drafted by delegates to a constitutional convention, not by members of a legislature, and not because the draft itself sucked. But for one or both reasons, the voters didn’t want it. Sounding a little miffed, the legislature then passed a resolution calling on Ye Voters to decide “Whether they [choose] to have a new Constitution or Form of Government made, and, [if so] Whether they will empower their representatives to vote for calling a State Convention for that purpose [, Whereupon maybe some of them can show up and try drafting a Constitution themselves, if they think it’s so easy].” The voters said yes to both questions. 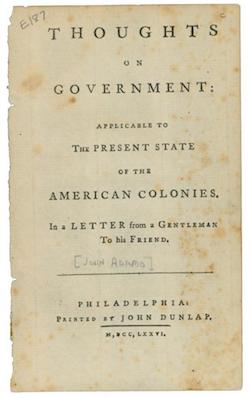 “Adams can probably just cut and paste from that thing of his.”

But as it turned out, they didn’t have to write it themselves. By convention time in 1779, John Adams was back from France, so they made him do it. (According to this, the delegates named John Adams and two others to the committee, and “the other two picked [John] Adams” to do all the work.) But he probably wanted to do it, having thought and written extensively on theories of government. Adams’s draft, which the voters approved in 1780, was a model for the U.S. Constitution, which has the same general structure. It is, according to Massachusetts, “the world’s oldest functioning written constitution.”

Which they say as if that were a good thing.

Of course, to the extent this shows the basic structure was sound, that’s true. But the only reason they can say it’s “the world’s oldest functioning written constitution” is that they refuse to write a new one. They amend it instead. And this was fine for a while, but by now the Massachusetts Constitution has been amended 120 times, or as they insist on writing it, CXX times. This means, for example, that if you want to know what Chapter I, Section II, Article II says about the state senate, you have to first read the original text and then “[s]ee Amendments … II, III, X, XV, XX, XXII, XXIII, XXVI, XXVIII, XXX, XXXI, XXXII, XLV, LXIV,LXXI, LXXVI, LXXX, XCII, XCIII, XCIV, XCV, C, CI and CIX.” Not even kidding, that’s what it says.

All this means that Adams’s original draft, which was brilliant and all, but long-winded to start with, has become a 45,283-word convoluted tome of articles and amendments and amended amendments. This is kind of ridiculous even without the Roman numerals (though I could give you about XCIV reasons why you shouldn’t go above V with those). You can get the text as it currently stands, but not without all kinds of cross-references and cross-cross-references. Massachusetts can still be proud of John Adams without clinging to the elderly text. Shortening the oath was good, but do a whole new constitution every once in a while like the other elderly states have.

This is not to say that other states have been, shall we say, succinct. Because the Massachusetts Constitution isn’t the longest. Nor do they tend to get shorter over time. Oh no. Missouri rewrote its constitution in 1945, and that one is 69,394 words long (according to the Council of State Governments). Of course, everything’s bigger in Texas, and that includes the constitution at 86,936 words. Wow, that seems like a lot.

Until you read that Alabama’s state constitution is 388,882 words long. That’s almost 800 single-spaced pages. That’s 50 percent longer than Crime and Punishment. That’s A Tale of Two Cities, Wuthering Heights, and Catch-22 combined. It’s been amended 926 times. It’s almost enough to make me apologize to John Adams (and I probably would if I weren’t still pissed about the Alien and Sedition Acts).

To be fair, and as this article points out, though in the U.S. we tend to think of constitutions as relatively short, that’s probably because our federal constitution is short (a mere 7,762 words). But the federal government is—or at least was supposed to be—one of limited powers, whereas state governments are general, so one would expect those constitutions to be longer. Okay. But I would still say they should weigh in at less than Crime and Punishment. Can we agree on that?

Finally (and I know I’ve used too many words here, but 300 of them are Massachusetts’s fault), I have to comment about national constitutions. Again, the U.S. Constitution is short—according to this list, only 24 countries have a shorter constitution than ours, and that includes Monaco, which could probably list all its citizens and not go over 4,000 words (it’s only 3,814). Which country has the longest constitution? I’ll give you one guess.

Good Reason to Kill #32: Disagreed About Who Should Win “American Idol”

Kansans Wanting to Marry a 12-Year-Old Must Act Quickly

TIP: Get Legal Advice Before Turning Yourself In