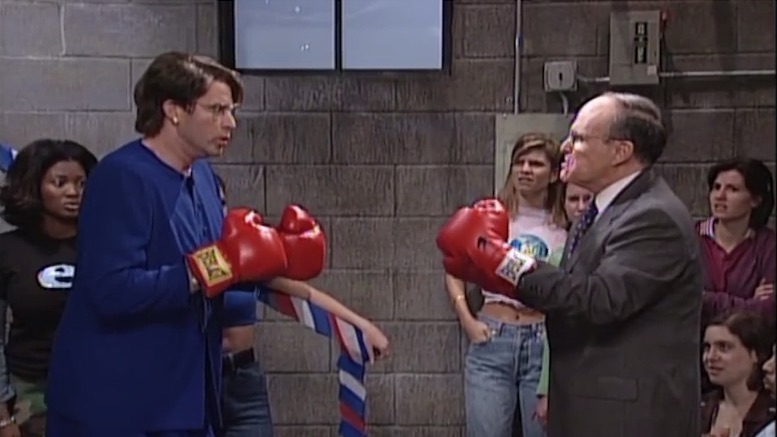 What's that, fist? He talks too much?

In 1997, Rudy Giuliani (then the mayor of New York) hosted Saturday Night Live, and appeared in a sketch called “Janet Reno’s Dance Party” in which Janet Reno (then Attorney General of the United States) was played by Will Farrell (then Will Farrell). It was a completely ridiculous scenario in which Janet Reno hosts a dance-party TV show live from her basement, and ends up in a fight with Giuliani. Giuliani is reluctant at first, but after Reno takes the first punch, he dives in, saying, “Janet Reno, prepare to eat it, Giuliani-style!”

He loses, of course.

In 2018, Rudy Giuliani (then a member of Donald Trump’s legal team) appeared on television again, this time in a sketch called “Fox News Network” in which the reporter asking him questions about Trump (then apparently the President of the United States) was played by Sean Hannity. This was an even more ridiculous scenario in which Hannity, previously a client of Trump’s former lawyer Michael Cohen, asked one of Trump’s current lawyers about allegations that Trump knew Cohen secretly paid money to a porn star on Trump’s behalf during the campaign to keep her quiet, which is very likely a violation of campaign-finance laws, and that the money may have come from Trump himself.

And Giuliani confirmed it.

Giuliani specifically confirmed, in fact, that the money came from Trump, or at least that Trump “repaid” Cohen after the latter wrote the check, or dropped off the bag in a pre-arranged location, or however such payments are made under that general arrangement.

“What is surprising” about Giuliani’s statement, said a campaign-finance lawyer quoted by the Washington Post, “is that Trump recently said he knew nothing about the payment.” Either that man is easily surprised, or he meant it was surprising that Giuliani, a lawyer, would say on national television that his client lied about something that was quite possibly a felony. And that part does seem kind of surprising. But also kind of hilarious.

Speaking of surprise, Giuliani “appeared surprised to learn” from Hannity “that Cohen has said he made the payment to Daniels on his own,” contrary to what Giuliani had just said on the air. “He did?” Giuliani responded, apparently not having prepared in the slightest for this interview. (He did.)

So, not his funniest role ever, maybe, but close.