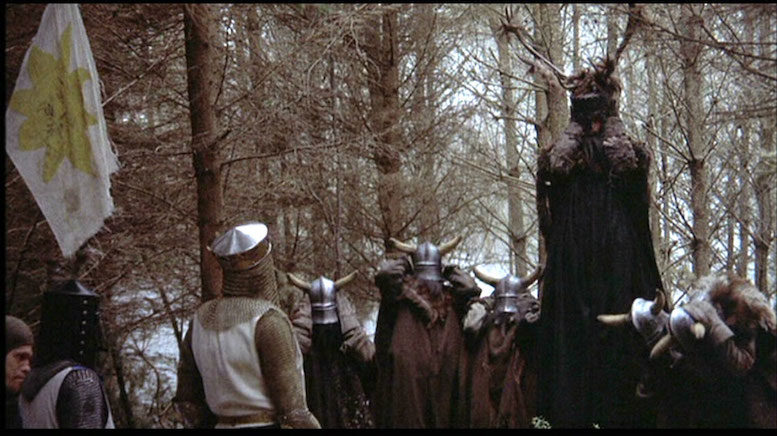 Two of the words they cannot hear

There are quite a few references to Monty Python in Anglo-American law, as there should be. See John G. Browning, “‘Tis But a Lawsuit: How Monty Python Has Crept Into the Legal System,” 78 Tex. B.J. 520 (July 2015) (collecting some of them); see also “It’s Just a Flesh Wound,” Lowering the Bar (Mar. 10, 2015) (reporting one of them). Various Westlaw searches along the lines of python /s grail AND shrubbery, though, didn’t turn up any cases citing that particular scene. (Searching knights /s ni yielded ten results, which I was excited about until I noticed they were all Puerto Rico cases involving the Knights of Columbus.)

This case isn’t likely to change that, because it’s apparently been dismissed. But it did involve a motion to suppress arguing that under the circumstances, a shrubbery did not constitute probable cause, and its author did not miss the chance to invoke Python in support.

The state’s opposition to that motion explained that a park ranger was patrolling an area in southern California, inland near Salton Sea, when he observed a Jeep driving with what the opposition described as a “large piece of desert shrub” stuck to the front bumper. The ranger “identified the piece of shrubbery as the kind that grows in the immediate area”—the opposition doesn’t disclose either the kind or the immediate area—and “initiated a traffic stop … to investigate a possible violation of the California Vehicle Code and State Parks regulations.”

The case therefore squarely presented the question of whether seeing a shrubbery stuck to a car’s front bumper constituted probable cause for a traffic stop. If so, then whatever the officer observed as a result of the stop would likely be admissible. If not, none of it would be. And you have to feel a little sorry for the district attorney here, because the ranger really had given him nothing else to work with. Just the shrub.

“In the case at hand,” he therefore had to write, “the detention is justified because the ranger observed a desert shrub stuck to the vehicle’s front bumper.” Where did that desert shrub come from? Well, the desert. And the area where this stop occurred is near a state park, which in southern California tend to be made of desert. So you see where this is going. “The large piece of shrubbery on the car … gave the ranger reasonable suspicion to believe that the defendant had mutilated or destroyed protected state park vegetation in violation of state park regulations.”

Not only that—and I know you’re already convinced—the state argued that the stop was lawful under the “community caretaking” exception. This is a thing, sort of, although I have a feeling that name is the one preferred by law enforcement. See Brigham City v. Stuart, 547 U.S. 398 (2006) (referring to it as the “emergency aid doctrine”). The exception says that police can enter a home without a warrant when they have an objectively reasonable basis for believing that someone inside is seriously injured, or about to be. Okay. So … what’s that got to do with shrubberies? Well, what if “the shrubbery suddenly became dislodged while the car was being driven at high speed”? Someone in the community might be injured.

These are the sorts of arguments that might very well get Monty Python cited in response, and that’s what happened here. The defendant’s lawyer, Darren Bean, cranked out a two-page reply pointing out that given the shrubbery’s position low on the left front fender, it was entirely possible that the defendant didn’t even know it was there. The ranger, “apparently assuming [the defendant] was headed to see meet the Knights Who Say Ni, pulled [the car] over to ‘investigate.'” But, Bean pointed out, “[t]he mere presence of [a] shrubbery does not give rise to [reasonable] suspicion of violations of law.”

The report did not say the defendant had been driving erratically, nor did the ranger have any real reason to suspect the shrub was a state-park shrub, as opposed to a shrub from some of the many other desert locations in that area. Seeing it therefore did not give him probable cause to make the stop on the theory that the driver had, negligently or intentionally, thrashed a protected shrub.

“Pulling a man over for a shrubbery he couldn’t even see,” Bean concluded, “is legally the same as cutting down a mighty tree with a herring. It can’t be done.” It can’t be done legally, that is, and that means the defendant’s Fourth Amendment rights had been violated. According to Bean, the judge agreed, and the state later dismissed the case.

Bean attached a couple of Wikipedia pages in case the judge didn’t know what all the shrubbery talk was about, although he or she really should have.

This is Bean’s second appearance (at least) in Lowering the Bar, the first one being way back in 2006 when he earned a spot for himself by litigating and winning the right to legally change his name from “Darren Lloyd Bean” to “Darren QX Bean!” See “Californian Wins Right to Use Exclamation Point in His Name” (Dec. 3, 2006). (He told me the “QX” is pronounced “Lloyd.”)

Bean! did not sign this particular motion that way, but he could have.

A Good Reason Not to Tattoo “MURDER” on Your Neck

Lawsuit Demands End to Use of Term “Inmate”