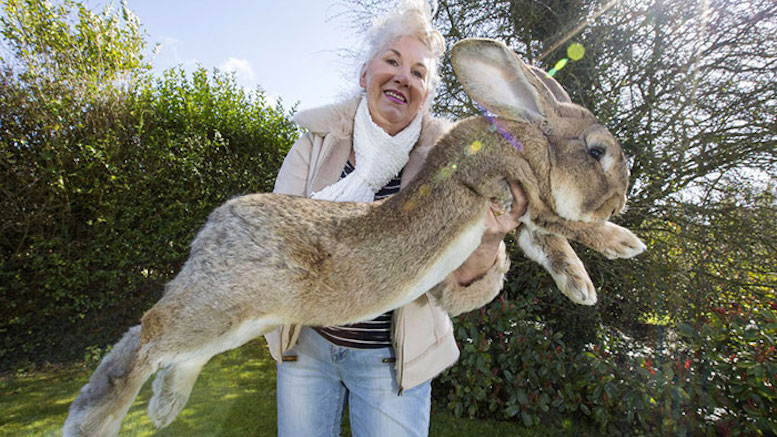 Darius, father of the now-departed Simon

When we last discussed the case of Simon the Giant Rabbit and his sad demise, United Airlines had settled with his former owner, but it was looking a lot like the people who bought him were going to sue. See “‘This Case Is About More Than Just One Rabbit,’ Says Lawyer for Owners of Giant Rabbit” (May 9, 2017). They did, and more than a year later, that case is still pending.

You will recall that Simon, who at just ten months of age was already over three feet long and expected to one day claim his father’s title of World’s Longest Rabbit, mysteriously died while being shipped from the UK to Iowa. Just how this happened, and who, if anyone, is to blame, is still disputed. The plaintiffs described it, as plaintiffs will do, rather dramatically, saying that  “[t]he negligent, reckless, willful, and wrongful actions of United Airlines, Inc., caused the death and burning of Simon, the soon-to-be world’s largest rabbit….” The defendant described it, as defendants will do, rather passively, saying only that “[w]hile in United’s possession at O’Hare International Airport, the rabbit was discovered to be deceased.”

I should note that the plaintiffs’ description also does not even hint at how Simon died—the “burning” refers to the fact that United had him cremated, not to the manner of death. (And if you’re thinking an unauthorized rabbit cremation may have resulted in charges of a “cover-up,” you are correct.) According to United, Simon was alive and apparently well after the flight from Heathrow to O’Hare, and they moved him to a pet facility there to await the next leg of his journey. But as an employee discovered about 30 minutes later, that journey ended not in Iowa, but in Rabbit Heaven.

That means he was dead, not that there’s a shop called “Rabbit Heaven” in the concourse or something like that. He died.

The plaintiffs are three businessmen who planned to use Simon to “creat[e] a fundraising vehicle for the Iowa State Fair Blue Ribbon Foundation.” As it was “widely expected” (by people who have expectations about this kind of thing, I guess) that Simon would eventually claim his father’s record, and because even if he didn’t he was one huge-ass rabbit, plaintiffs expected him to be a “feature attraction.” This would ensure their ability to sell “hats, shirts, miniature versions, books,” and other Simon-related merchandise, according to the complaint. (I really hope this case gets to trial so an expert will have to testify about what value a “miniature version” of a giant rabbit might have.) Those plans have now gone up in smoke.

Plaintiffs sued United in Iowa state court for negligence, conversion, and “spoliation of evidence and cover-up.” And the case was in Iowa state court for, oh, probably three to five seconds before United removed it to federal court. It then moved to dismiss, arguing among other things that the plaintiffs’ state-law claims were all barred by the Montreal Convention, the multilateral treaty that governs all disputes regarding rabbits more than three feet in length.

I’m really hoping someone goes with that in a law-school exam answer some day, but in fact the Convention is the multilateral treaty that governs “all international carriage of persons, baggage or cargo performed by aircraft.” Specifically, it makes the carrier strictly liable for harm during  “carriage,” which includes things that happen on the runway or during a layover, but significantly limits the damages available. And because it’s a ratified treaty, it’s pretty much the same as a federal statute if there’s a conflict between it and state law—the treaty controls.

Since Simon was “cargo” for purposes of the Convention, and the Convention limits liability for cargo damage to 17 “SDRs” (currently about $1.43 each) per kilogram, then 17 times $1.43 x 10 kilograms of rabbit=a maximum of $243.10 for the death of Simon. (They may have declared and paid for a greater value—the evidence suggests they paid £415 to get him—but if they did, the pleadings don’t mention it.) But if you think Plaintiffs believe $243.10 would be sufficient compensation for the death and burning of the soon-to-be world’s largest rabbit, well, you are very sadly mistaken.

In response to United’s motion, Plaintiffs made two arguments that were … what’s the word? Wrong. And not just probably or mostly wrong, but the-thing-you-just-cited-says-the-opposite-of-your-position wrong. The court correctly granted the motion, but gave Plaintiffs a chance to try to plead claims under the Convention, if they could. They apparently interpreted that to mean, “say the same stuff again but also say ‘Montreal Convention,'” because that’s basically what they did. A renewed motion followed, and the court granted it, dismissing the state-law claims.

This does leave Plaintiffs with a claim under the Montreal Convention … for $243.10. They can’t get punitive damages, and they can’t get damages for the emotional trauma of Simon’s death, great though that trauma almost certainly was. Not surprisingly, Plaintiffs have tried desperately to keep the state-law claims alive, but this quest seems to be hampered by … what’s the phrase? Not having any plausible arguments to make? Close enough.

Based on the hearing transcript, the only argument Plaintiffs really made is that this case is different because (according to them) United deliberately destroyed important evidence by cremating Simon, which also brought the “carriage” to an end, so the Convention doesn’t apply. Are there any cases supporting that view? the judge asked. Nope. “Judge, we found no cases,” Plaintiffs’ lawyer responded, but “it is not surprising where a carrier has deliberately destroyed evidence—in this case, cremated Simon—that’s the unique fact that does not present itself.” So, I should ignore these other cases because they didn’t involve setting a giant rabbit on fire. I see. Thank you, counsel. I think I have everything I need to rule.

Wait, counsel did have a final comment: “We just ask for justice for Simon, Your Honor.” Surprisingly, this emotional appeal does not seem to have swayed the judge.

Just what a trial would look like in this case, other than ridiculous, is hard to say. Plaintiffs’ only claim is under the Convention, and the damages are set by formula, so it’s not clear what sort of testimony would be required. (I guess that means my dream of expert testimony on the value of a miniature version of a giant rabbit won’t come true.) But according to the judge’s order, if there is a trial, it will commence on April 1, 2019. Which sounds about right.