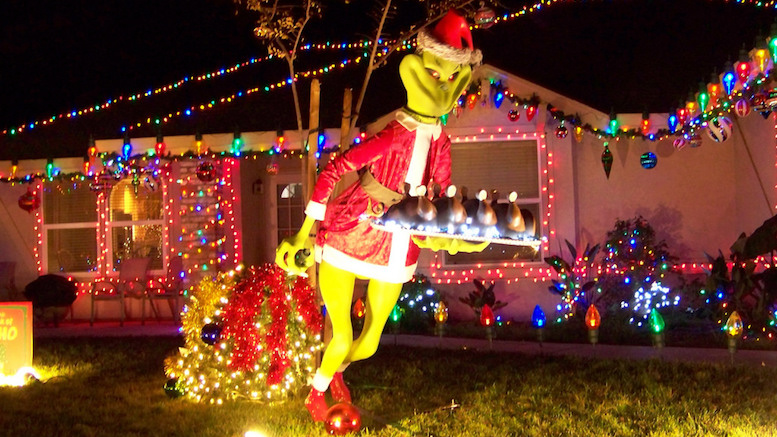 A terrifying (and unrelated) Grinch stealing what we can only hope is roast beast (image: Rojer via flickr.com)

The Second Circuit held on Friday that what Reuters called a “lewd and profane” stage version of “How the Grinch Stole Christmas!” did not infringe on the original, affirming the district court’s decision in favor of playwright Matthew Lombardo and against Dr. Seuss Enterprises.

I was not previously aware of this work, but Reuters’ summary makes it clear that it departs in some significant ways from the Dr. Seuss classic:

The dispute began when Lombardo in 2016 was preparing to stage “Who’s Holiday!” a one-woman play featuring an adult version of Cindy Lou Who, the endearing girl who in Seuss’ story stops the Grinch from ending Christmas.

In contrast, the Cindy Lou Who in “Who’s Holiday!” has become a 45-year-old woman who spends her days in a trailer home while battling alcohol and substance abuse, following a stint in prison for murdering her husband, the Grinch.

To me the most disturbing thing there is forming the possessive as “Seuss’ story” (and if you think that’s fine, you are wrong), but you can see how Dr. Seuss’s estate might feel differently.

Lombardo argued that his version was a parody that qualified as fair use, and the Second Circuit’s brief summary opinion, embedded below, provides a good review of how “fair use” works under the Copyright Act. In determining this, a court considers four “non-exclusive factors”:

17 U.S.C. § 107. The Second Circuit held that three of the four factors weighed in Lombardo’s favor, and the remaining one wasn’t very important.

While the play is presumably for commercial purposes, the main point of the first factor is to determine whether the new work “adds something new” to the old. “The Grinch” didn’t have any murders in it, to the best of my recollection, though it did involve quite a few other crimes, including dog abuse. The court didn’t mention the murder specifically, though, simply finding that “Who’s Holiday” was a parody of the original, and as many cases have held, parodies have “an obvious claim to transformative value” because they imitate the style of the original in order to mock it (here, “to mock the naive, happy world of the Whos.”).

The court noted that the second factor is “rarely useful” in parody cases, precisely because parodies necessarily copy “publicly known” works for comedic effect. The creator isn’t trying to confuse anybody about which is which, in other words. So this factor had little weight.

The third factor involves considering whether the author used more of the original work than was necessary to achieve the goal. Here, while the play “does use the Grinch’s characters, setting, plot, and style, it is in service of the parody,” not just to copy for the sake of copying. Again, the court recognized that a parody has to invoke the original to some extent.

Finally, the Second Circuit agreed with the district court that “Who’s Holiday” was unlikely to affect the market for “How the Grinch Stole Christmas” itself, or any derivative works, for reasons that are hopefully obvious.

Notably, the court relied mostly on what is still the leading Supreme Court case on parody, namely Campbell v. Acuff-Rose Music, the 1994 case involving the even lewder and far less interesting work of 2 Live Crew. The song at issue there, “Pretty Woman,” was also considered a “parody,” which (as Justice Kennedy pointed out) is debatable. If that was entitled to the benefit of the doubt, as the Court held, then “Who’s Holiday” certainly should be.