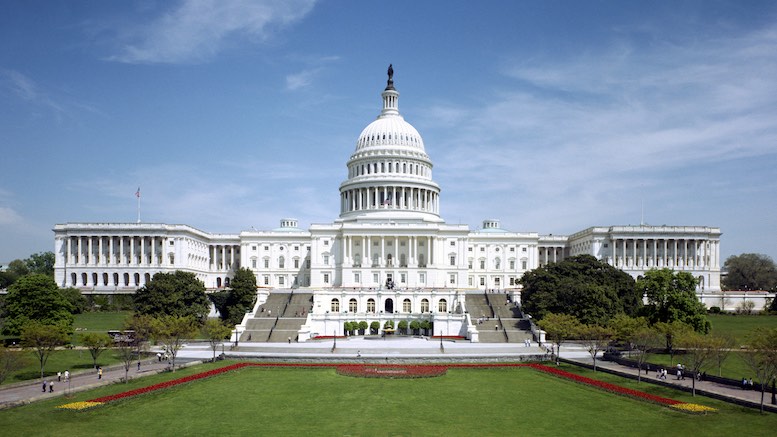 How dumb was it?

“Completely idiotic,” according to CNN legal analyst Paul Callan. He was referring to the alleged crime for which Rep. Chris Collins (R–N.Y.) was arrested yesterday, an insider-trading scheme involving the stock of a company called Innate Immunotherapeutics.

According to the indictment, the only project Innate had in the works was a drug called MIS416, intended to treat multiple sclerosis. It had been conducting a clinical trial of the drug since October 2014, and results were expected in 2017. If the drug worked, it would be hugely profitable, and far more importantly, great news for the treatment of MS. If it didn’t, that would be hugely disappointing, and far less importantly, terrible news for congressmen from New York who owned lots of the company’s stock.

Collins owned almost 17 percent of that stock, worth millions of dollars. Because he was also a member of Innate’s board of directors, he had access to what’s called “material nonpublic information” about the company, the sort it is illegal to trade upon. This is why he got an email about the clinical trial’s results at about 7 pm on June 22, 2017, four days before the results were made public. And that email began, “I have bad news to report,” which is the kind of news that can totally ruin a Congressional Picnic at the White House, if that is where you happen to be at the time you get it, as Collins was.

Here’s why what happened next was so dumb.

Collins’ ownership of Innate stock has been controversial for some time, not so much because he owned it but because he reportedly wouldn’t shut up about it, urging everyone he knew to buy it. For example, on June 8, 2017, The Hill reported that several of his colleagues were complaining that Collins’ incessant sales pitches, some made during official meetings, were really not appropriate. It is not illegal, of course, for a congressperson to own stock, or to talk about stock. Nor is it illegal to give stock tips … unless you have material nonpublic information. And since it was no secret that Collins was on the company’s board, his pitches probably made people a little uncomfortable for that reason.

As you may recall, until pretty recently it was perfectly legal for members of Congress to trade on inside information. Not for you, of course. You’d go to jail. But for some strange reason, mystifying to all who considered the matter, that law simply did not apply to Congress. That changed in 2012, though, not coincidentally after a 60 Minutes exposé called attention to it. Since then it has been illegal for them, too. But here was a congressman incessantly talking up the stock of a company of which he was a board member. Because of this, Collins was already under investigation, and knew he was under investigation, on the fateful day when the bad news ruined his picnic.

It is in that context we must consider what he did next.

Well, full context requires a little more info. First, Collins responded to the email saying, “Wow…. How are these results even possible???” an email he sent at 7:10 pm. Second, you also need to know that Collins’s son is named “Cameron,” and that he also owned a lot of Innate stock. Okay, now you can consider this: 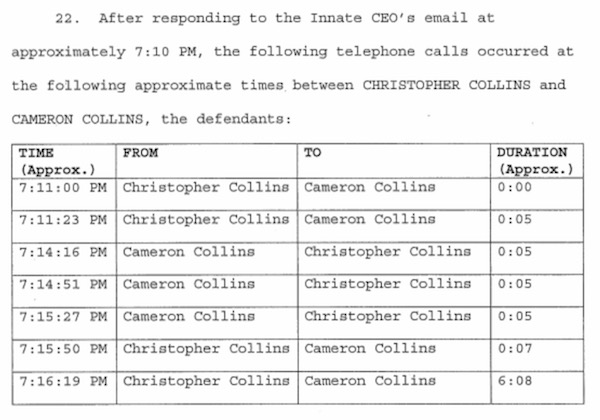 Paragraph 22 of the indictment

This is a good example of what we call “circumstantial evidence.” We don’t know what the Collinses wanted to discuss right then, on what seems like a very urgent basis, or what they did in fact discuss during the six minutes and eight seconds of the call that went through. Could have been almost anything. Maybe it was just a great picnic. But one might consider it a reasonable inference that this frantic exchange between two major shareholders, one of them a director, commenced within 60 seconds of the time said director learned the company’s stock was about to tank, might have involved an exploration of what options said shareholders might have for avoiding significant losses, such as getting a broker on the phone right *$#&ing now. Circumstantial evidence is frequently admissible to prove illegal conduct, precisely because such reasonable inferences can sometimes be drawn.

But you don’t need to worry about that here because the feds were listening to the call.

Well, I’m guessing they were based on paragraph 23, which states that during the six-minute call, “CHRISTOPHER COLLINS, the defendant, spoke to CAMERON COLLINS, the defendant, and told him, in sum and substance, that MIS416 had failed the Drug Trial.” Maybe that’s just an inference or even a mere allegation, though. If not, it would be a good example of what we call “direct” evidence.

But let’s go back to the circumstantial kind. At his earliest opportunity, CAMERON COLLINS the defendant placed a sell order for 16,000 shares of Innate stock—followed later that day by another 17 sell orders, followed the next day by another 36. He placed one of the 17 orders (for 50,000 shares) just after making another call to his dad. They were still talking when he placed the order. Cameron also passed the info on to others, some of whom were also dumb enough to sell based on insider information coming from somebody who was already under investigation for insider trading. All told, the Collinses and their friends and relatives unloaded well over two million shares of stock before the info became public.

Oh, they also sent text messages about this, another reason Callan called the alleged crime “idiotic.”

All three defendants have pleaded not guilty, and CHRISTOPHER COLLINS the defendant has vowed he will continue to seek reelection. Collins’s lawyers noted in a statement that “the government does not allege that Congressman Collins traded a single share of [his own] Innate Therapeutics stock,” but rather is alleging only that he gave inside information to family members so they could trade. That is true. The problem is, that’s illegal, too.

Update: Collins insisted he would remain on the ballot and seek re-election despite the indictment, but then he didn’t.

Illinois Plaintiffs’ Attorney Manages to Sue Himself in Complicated Scheme

Scott Rothstein: Why Come Back From Morocco?