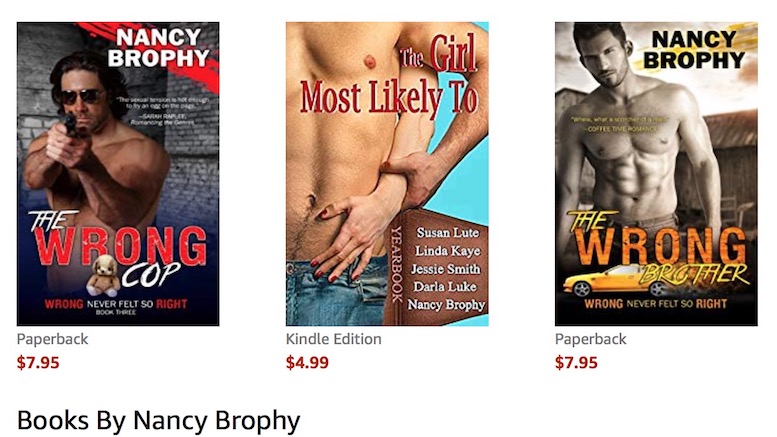 After an investigation that probably did not need to last three months, an Oregon woman was arrested last week on charges of murdering her husband. Daniel Brophy was shot at work on June 2, and according to The Oregonian, police initially had no suspects. Except that the spouse will almost always be on the list of possible suspects, and in this case, police probably thought it was at least worth reading the spouse’s 2011 essay, “How to Murder Your Husband.”

Nancy Brophy, 68, is a romance novelist whose “Wrong Never Felt So Right” series includes such works as The Wrong Cop, The Wrong Brother, and another work of probable interest to police, The Wrong Husband. The 2011 essay, posted on a writing-workshop site, was much shorter, and also free of hunky images.

“As a romantic suspense writer,” Brophy wrote in the essay, “I spend a lot of time thinking about murder, and, consequently, about police procedure. After all, if the murder is supposed to set me free, I certainly don’t want to spend any time in jail.” She continued: “And let me say clearly for the record, I don’t like jumpsuits and orange isn’t my color.”

Turns out the jumpsuits in Portland are blue.

The essay, which was tagged as “humor,” and was recently set as “private” though it has been on the internet for seven years and so is easily found, first discusses possible motives for a romance-novel heroine. (Or maybe “protagonist” is a better word.) They include: “Financial,” “Lying, cheating bastard,” “Fell in love with someone else,” “Abuser,” or “It’s your profession,” the last option being best for one who already happens to be a hitwoman. It is not clear yet whether any of these are suspected motives (or professions) in Brophy’s case. The essay does not really favor any of the options, and notes repeatedly that, of course, the wife will certainly be a suspect in any such case. “So,” she noted in the context of financial motive, “you have to be organized, ruthless, and very clever.”

“Husbands have disappeared from cruise ships before,” she pointed out. “Why not yours?”

The essay then discusses how the character should do it. Those options: guns (“loud, messy, require some skill”), knives, a garrote (but “how much upper body strength does it require to strangle a person?”), “random heavy piece of equipment” (e.g. baseball bat or pipe wrench), poison (takes too long), hiring a hit man (if necessary), or “hiring a lover” (“never a good idea”).

Brophy was careful to note that “I find it is easier to wish people dead than to actually kill them”—which at least made it sound like she’d already tried both—but suggested the latter was certainly possible, in the abstract. “[T]he thing I know about murder,” she wrote, “is that every one of us have it in him/her when pushed far enough.”

While this is certainly ironic, it would also certainly not be admissible evidence, because it isn’t specific enough to prove anything about whether or how the crime was committed in this particular case. Under Federal Rule of Evidence 404, for example, evidence that the defendant has committed another “crime, wrong, or other [bad] act” usually isn’t admissible “to prove a person’s character in order to show that on a particular occasion the person acted in accordance with the character.” It might be admissible to prove, for example, that the defendant followed a particular plan (i.e., the acts are similar enough to establish a modus operandi), or that the second one wasn’t an accident. But the acts have to be very similar, or else the evidence should be excluded because of the risk a jury might convict for the earlier crime or “bad act” instead of the one charged.

And, of course, in a situation like this one the First Amendment would also be implicated. With very rare exceptions, people have the right to say or write even horrific things without having to worry about those things being used against them. See King, Stephen; see also “Author Arrested for Writing About Murder in the 30th Century,” Lowering the Bar (Sept. 2, 2014).

One of those very rare exceptions was a 1997 case in which a court held the First Amendment did not protect the publisher of an “instruction manual” called Hit Man: A Technical Manual for Independent Contractors from a wrongful-death lawsuit. Rice v. Paladin Enterp., Inc., 128 F.3d 233 (4th Cir. 1997). The evidence there showed that the killer had not only ordered and received the book, but had followed at least 20 specific recommendations it made—or, he just did 20 very specific things that also happen to be mentioned in the book, depending who you asked. Under those circumstances, the court found there was a jury issue as to whether the publisher had “aided and abetted” the murder. (The U.S. Supreme Court denied review, and the case settled.) That decision is questionable, even on those facts, and as noted above, “How to Murder Your Husband” is not at all comparable.

Coincidentally, the Hit Man case was the subject of a recent episode (Case 94) of the Casefile true-crime podcast (which I recommend—though I sometimes wish I could unhear Case 12, so beware of that one). As Casefile mentioned, it turned out that Hit Man had not in fact been written by “Rex Feral,” experienced killer-for-hire, but by a mother of two in Florida who had no criminal record and did not even own a gun. But then, while her work seems to have been pretty convincing as fiction, the killer didn’t get away with it. Yet another reason to be skeptical of things you read online.

The End Is Nigh Again

No, I Was Just Trying to Fix the Door, Says Burglar Stuck Under It