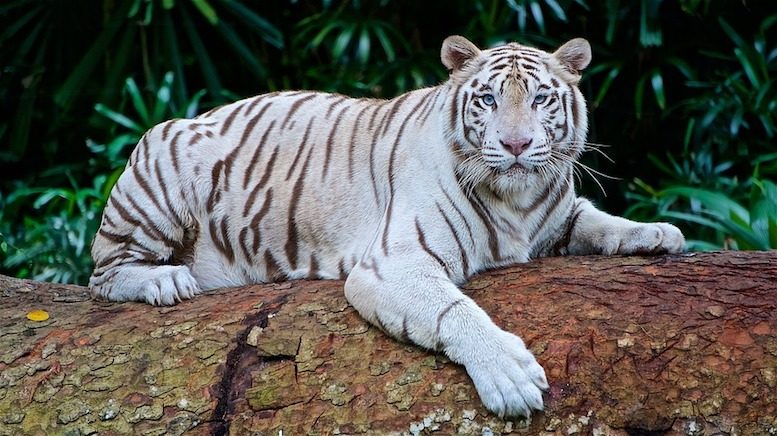 The appellant wanted a permit to keep up to five of these. The appropriate number: zero.

“It’s a valid concern that you don’t want to be eaten by a tiger,” said Brian Baca, planning manager for Ventura County, California. Well, that depends.

If you lived in Iceland, for example, that wouldn’t ordinarily be a valid concern. It would be weird. Nor would it ordinarily be valid in Southern California, where the greatest risks are normally posed by wildfires, mudslides, and Harvey Weinstein, not necessarily in that order. But in this case, the tiger concern was valid, according to the California Court of Appeal. In Hauser v. Ventura County, the court held county officials did not abuse their discretion when they told Irena Hauser she couldn’t keep five tigers on her property.

According to this 2013 report, at that time Hauser owned two white Bengal tigers, animals that had reportedly “starred in many print ads, TV shows and videos (including one by rapper 50 Cent).” As far as I can tell, the tigers didn’t eat anyone during these gigs (though I admit my search was limited to “50 Cent eaten by tiger”). They were being kept at a licensed animal facility then, but Hauser decided she would like to keep them in Malibu instead. The area is zoned for keeping “wild animals,” apparently, so all she needed was a permit. The prospect of having tigers around concerned some of her neighbors, though. And by “some” I mean 11,000, the number of signatures on a petition opposing the permit application.

According to this report, one of the opponents was actress Tippi Hedren, star of The Birds. That suggested some jokes in and of itself. But then I learned that Hedren later starred in a movie called Roar, about “a family’s misadventures in a research park filled with lions, tigers, and other wild cats.” In preparing for that movie, Hedren and her family lived for some time with a nine-foot-long, 400-pound lion (named “Neil”) at their home in Sherman Oaks, but eventually had to move to a ranch outside L.A. after their neighbors complained. The film, which involved more than 130 lions, tigers, leopards, panthers, and jaguars, was a complete disaster. Of the more than 100 people who worked on it, over 70 percent were mauled at some point, including Hedren, her husband, and Hedren’s young daughter, Melanie Griffith. Then the film tanked at the box office. Hedren still runs a big-cat preserve (safely located at the edge of the Mojave Desert), but has since conceded that having a fully grown lion at home in Sherman Oaks, at least, was “stupid beyond belief.”

So Tippi Hedren knows a thing or two about this subject.

Whether she made the difference or not, the county board voted 4-1 to deny Hauser’s application. It found she had not shown her project was “compatible with the planned uses in the general area,” uses I would paraphrase as “living at home without being eaten by a tiger.” The superior court agreed, and Hauser appealed. To win, she had to convince the Court of Appeal that the board’s findings were not supported by substantial evidence; otherwise, the court would defer to the board. So, what evidence did the board have?

While that area isn’t urban, it isn’t rural, either. There were 28 homes within half a mile of the proposed five-tiger compound, 46 homes within one mile, and “two children’s camps within two to three miles.” Now, it appears that a tiger’s top speed is about 35 mph, though according to this source it can only maintain that speed for about 30 meters. (That source is a Runner’s World article analyzing how much of a headstart you’d need to outrun various animals, which seems like important information to have.) But let’s assume a cruising speed of 22 mph, about two-thirds of the maximum. At that speed a tiger could reach one of those 28 homes in less than a minute and a half, any of the 46 in just over three minutes, and either of the children’s camps in—well, probably in about five minutes, because it’s going to stay at top speed once it gets a whiff of a children’s camp, I don’t care what Runner’s World says.

The court does not seem to have done this math, but it didn’t really need to. “That there are … 28 residences within a half mile and 46 homes within a mile of the project is alone sufficient reason” to deny the permit, it held. It had other reasons, however, such as—let’s see here—evidence suggesting a certain lack of judgment, training, or rational arguments on Hauser’s part:

Hauser claims she has an unblemished safety record. But the claim is belied by a video showing her tigers roaming freely in the backyard of her Beverly Hills home. There is also a photograph of Hauser and her sister with the tigers on a beach. Hauser claims that when the photograph was taken, there were security measures off-camera. But the Board was not required to believe her claim. Moreover, even with the security measures Hauser claims, the Board could still find that having uncaged tigers on a beach is irresponsible.

Moreover, it is anything but comforting that Hauser’s only formal training is an eight-day class in which students are promised in advance that there is no written exam, no reading, and all students receive a certificate of completion. It is even less comforting that Hauser’s plan includes leaving family members with no formal training alone on the premises with the tigers.

Hauser claims that the only credible evidence is that an escaped captive-born tiger poses almost no risk to the public. But Hauser fails to explain what makes such evidence credible. The … record is replete with instances in which people have been severely injured or killed by large cats, including a highly experienced Las Vegas entertainer [i.e. Roy] who was mauled almost to death by his tiger. There is more than ample evidence to support a finding that Hauser’s animals pose a danger to the public. That Hauser apparently sees no such danger is itself a compelling reason to deny her a [permit].

There is no hint that Roar was part of the record in this case, but it sounds like it should be required viewing for any amateur big-cat enthusiast. Those who cannot learn from history are doomed to be tiger poop, or however that saying goes.

“The Facts Are Unusual,” Says Judge About Acquittal in Mistaken-Home-Invasion-Broom-Sex-Fantasy Case