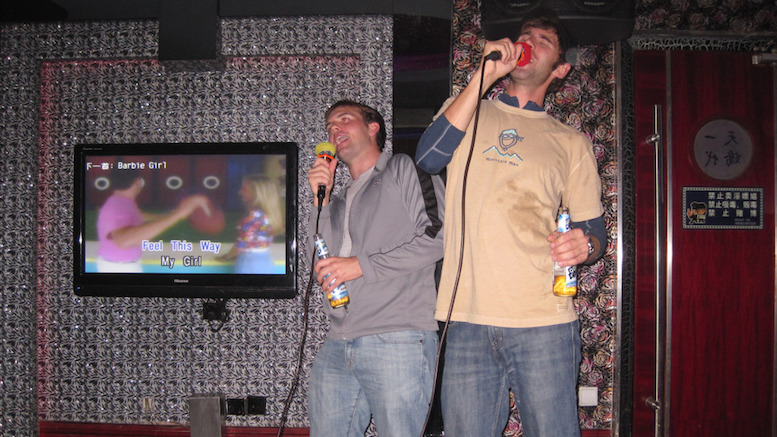 As we have seen before, karaoke is an activity fraught with danger.

For much of my life I was able to simply ignore its existence. Or maybe it’s more accurate to say I was in denial. Yes, there were narrow escapes from time to time. But for the most part, I was able to avoid it. Karaoke was something that happened to other people.

But eventually I decided I could no longer remain silent.

I don’t remember exactly when I began to speak out, but the first LTB post on the subject was apparently this 2007 piece on an assault in Seattle triggered by the Coldplay song “Yellow,” or by a poor rendition of it, depending on who you believe and whether you like Coldplay. At the time I wrote that I was “surprised to find out that attacks on karaoke singers seem to be rare,” so maybe that was the first time I had researched it. (Later in the same piece I also quoted myself as “an expert on karaoke-related violence,” but those statements aren’t necessarily inconsistent.)

In 2010, the matter was elevated to “Good Reason to Kill” status (#11) after the New York Times reported on—and this is true—the “‘My Way’ Killings,” which is the term used in the Philippines to refer to the phenomenon of karaoke-related murders, frequently resulting from poor karaoke performances of that particular song. See “Sinatra Song Often Strikes Deadly Chord,” NYT (Feb. 6, 2010). “The authorities do not know exactly how many people have been killed warbling ‘My Way’ in karaoke bars over the years in the Philippines,” the NYT reported, but at the time it was at least half a dozen. The report also featured the revelation that in 2008, “a Thai man killed eight of his neighbors in a rage after they sang John Denver’s ‘Take Me Home, Country Roads.'” (John Denver was not solely to blame, but still.)

These cases involve at least three categories of crimes: (1) attacks on a singer who is butchering a song someone loves (e.g., “My Way”); (2) attacks by a singer on someone who is mocking his or her (but likely his) performance (see also Assorted Stupidity #36), or on one affiliated with said singer; or (3) an attack by a bystander who is not directly involved in the karaoke but is just fed up with the noise (as apparently happened in the Thai case). I would lump all of these into GRTK #11.

This one, however, is getting a different number because though it is karaoke-related, the violence did not stem from the karaoke itself. Rather, the September 29 assault—also in Seattle, perhaps coincidentally—came after a singer concluded a performance only to find that someone had taken his seat. Back-and-forth shoving followed, during which the alleged seat-taker felt “sharp pressure in his ribs” which he believed at the time was from an elbow. He lifted his shirt, however, to find he had been stabbed. His lung was punctured, but he survived.

“He assaulted me, I defended myself,” the alleged stabber allegedly told police. “That’s all I have to say.” He’ll need to come up with something else to say, though, because a self-defense theory can only work if the force used was proportional to the threat. See, e.g., State v. Valentine, 935 P.2d 1294 (Wash. 1997). In other words, “he pushed me, I stabbed him” is a non-starter.

While alcohol almost certainly helped fuel this incident, at least one expert in karaoke-related violence believed it was likely that “Closing Time,” “Margaritaville,” and/or “Don’t Stop Believin'” also played a role. He ruled out theories involving “Come On Eileen” by Dexy’s Midnight Runners, however, saying that song usually provokes listeners to commit multiple murders and then burn down the structure in which the song was played, not just do some light stabbing.

Judge Wanted: Must Be Able to Read, Tell Time