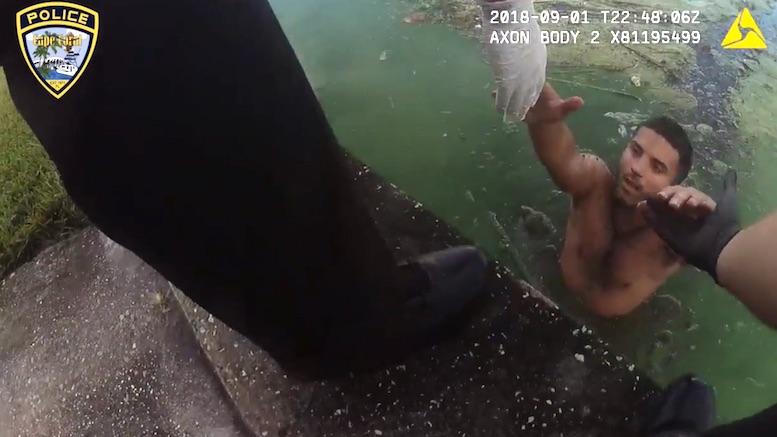 This site takes enough time as it is, and I really don’t want to have to start another one devoted entirely to this phenomenon. Because there may be enough material for that.

It seems like only yesterday (because it was yesterday) I was reminding the world that except in the rarest of circumstances involving extensive planning and extraordinary luck, things not often associated with criminal suspects, attempts to escape by water are doomed to failure. I think this is a useful thing for people to know, because involving water just increases the risk to everyone (though mainly to the suspect) with virtually no chance of success. So yesterday I passed on two more examples.

After press time—and granted, “press time” here is whenever I feel like pushing the button, I learned of a third example that also occurred in September, and then this morning I was informed of yet another one that apparently happened last night. So while I don’t want to get swamped by water-escape tales, obviously more reminders are needed.

Speaking of swamps, on September 1 in Florida swamp-like conditions brought an escape attempt to a quick end. According to multiple reports such as this one, police in Cape Coral made a traffic stop about 7 pm that Saturday night, only to have the driver leap out and flee on foot. It isn’t clear how long the land portion of this attempt lasted, but the attempt terminated shortly after the man jumped into a nearby canal that connects to the Caloosahatchee River.

This gentleman has not been paying any attention to the news at all, because (1) he too remains unaware that trying to escape by water is pointless, and (2) he either did not know, or forgot, that the waterways in southwestern Florida have recently been plagued by toxic algae blooms. This particular canal was no exception.

Hm. Algae? Well, that sounds nasty, but how bad is it really? Probably two words will be enough for most of you: Erin Brockovich.

Brockovich showed up in the area a couple of days ago, not to sue the algae or even the Corps of Engineers, which has been releasing water from Lake Okeechobee that apparently contributes to the algae problem. (If the Corps doesn’t do this, the dike could fail, which doesn’t stop some people from blaming it). She was just there to “be an advocate for the people,” she said, which I suppose is fine. The algae doesn’t care, but her presence is a pretty good indicator of just how bad the environmental situation in the area is. Or was—some reports say it’s getting better now.

But it was Brockovich-level bad in early September, it appears, when this gentleman went into the canal. Not all algae is toxic, of course, but Florida has been hosting blue-green and “red tide” varieties that produce toxins galore. Here’s an excerpt from the Wikipedia article on red tides (emphasis added):

Fish such as Atlantic herring, American pollock, winter flounder, Atlantic salmon, and cod were dosed orally with these toxins in an experiment. Within minutes of receiving doses of the toxin, fish started to exhibit a loss of equilibrium and began to swim in an irregular, jerking pattern followed by paralysis and shallow, arrhythmic breathing and eventually death after about an hour. Scientists concluded that the toxic red tide had negative effects on fish that were exposed to it.

Anyway, this crap is also toxic to humans, and those who leap into canals and accidentally swallow some of it, as the guy in Cape Coral did, are no exception. Following the algae ingestion, he quickly “made his way back towards police” and “allowed officers to pull him back onto land.” Not that his plan to swim up the Caloosahatchee, or whatever, would have worked anyway, but this is a reminder that you also have to worry about what’s in the water with you.

For yesterday’s attempt, we go back north to Madison, Wisconsin, where a drunken 36-year-old launched himself first into a mosh pit and then into the Yahara River. Wait—it actually says he “launched himself into other bar patrons while attempting to start a mosh pit” (emphasis added), so I guess a better term for that is “assault.”

After being escorted out of the bar, the man exposed himself to one of the bartenders and fought to get back in. Police were called, and into the river he went. “Police said an officer used a flashlight to illuminate the man as he swam four city blocks down the Yahara River,” which I think is a pretty good illustration of how water escapes just waste everybody’s time. Yep, we can see you, as this beam of light illustrates, and I’m just walking along here illuminating you and waiting for you to get out, dummy. Of course, they were also preparing to rescue the man should he go under. And what thanks did they get? None:

While in the Yahara, the man swore at the primary officer, and at one point threw his shoes at the officer. The man also threw his pants and underwear on the shoreline.

He probably meant to throw them at the officer, but wet pants are harder to throw than shoes. Or so I am told.

Eventually, the man beached himself rather than forge on into Lake Monona, into which the Yahara empties. An officer said that a Madison firefighter “was outstanding in developing rapport with the suspect and convincing him to get out of the water,” so that probably spared everybody a laborious and irritating rescue effort.

In short, these are two more examples of the utter futility of impromptu attempted boatless water escapes. Please spread the word.