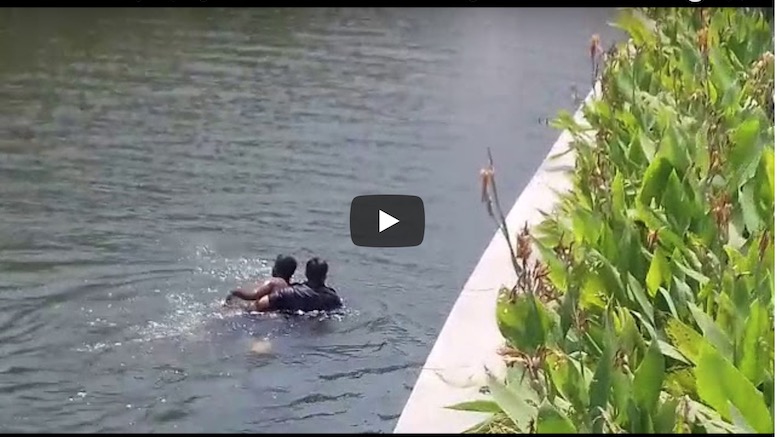 I have received two additional reports of failed attempts to escape by water, something that as you know by now (but criminals do not) is almost never successful. See, e.g., “Another Attempted Water Escape Fails” (June 14, 2018) (collecting prior cases).

On September 29, a 26-year-old Singapore man failed to escape after jumping in a canal and trying to swim away. The man, who had apparently been drinking, was allegedly approaching women in a church and making them “uncomfortable with his actions,” as the Straits Times put it. He also assaulted a male churchgoer, who “managed to pin the man to the ground but relaxed his grip after the man complained the ground was too hot,” which enabled the man to break free.

The old let-me-up-because-the-ground’s-too-hot ploy rarely works these days, but maybe it’s not that common in Singapore.

The suspect then ran outside, saw that police were approaching, and into the canal he went. This one is unusual in that a police officer actually went in after the guy, rather than just waiting until he realized the futility of an attempt to escape by water and surrendered on his own. (At least I think that’s what happened—one report says the man was “nabbed by an officer in the canal,” but I don’t think the officer was in there to begin with.) The water in the canal was only shoulder-deep, but it’s still possible the officer went after him because he thought the man might need to be rescued, not necessarily to capture him. Either way, the canal option failed as such options almost always will.

About two weeks earlier, police in Chicago handled an attempted water escape in a more traditional way, according to the Glenview Patch. After robbing a T-Mobile store there on September 13, three men fled in a vehicle that they later ditched after being located by police. One man was quickly taken into custody, but the other one wasted some additional time with a brief aquatic adventure:

A second man fled into Lake Michigan and swam out into the water in an unsuccessful attempt to hide from police, state police said. Officers encouraged him to swim back to shore and took him into custody.

Granted, you’ve got a better chance of making it across Lake Michigan than across the Atlantic, and I’m guessing that Lake Michigan has fewer sharks. Still, you might as well not bother. This is the lesson.

Well, it’s one of the lessons. The basic lesson, again, is that an attempted escape via water will generally involve at least two problems: (1) you can’t stay in there forever; and (2) you’re going to be inherently less mobile than your pursuers. Here’s an illustration based on the Lake Michigan incident that I think demonstrates this pretty well: 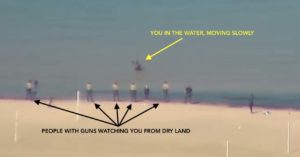 To date, therefore, the only semi-successful water escape I have documented remains the recent royal regalia robbery in Sweden. See “Speedboat Escape Is Exception That Proves the Rule” (Aug. 3, 2018). About two weeks ago, Swedish officials said they had arrested one man in connection with that heist, but at least one suspect is still at large and the jewels have not yet been recovered.

For the reasons I mentioned in August, however, that case is unusual in several ways, and you should not rely on it as precedent.

Supreme Court: Want to Search a Cellphone? “Get a Warrant.”

Blagojevich: Dying to Testify, Or Maybe Not [UPDATED: Not]

“Crybaby Killer” Who Tortured Victims With Parrot Gets 40 Years