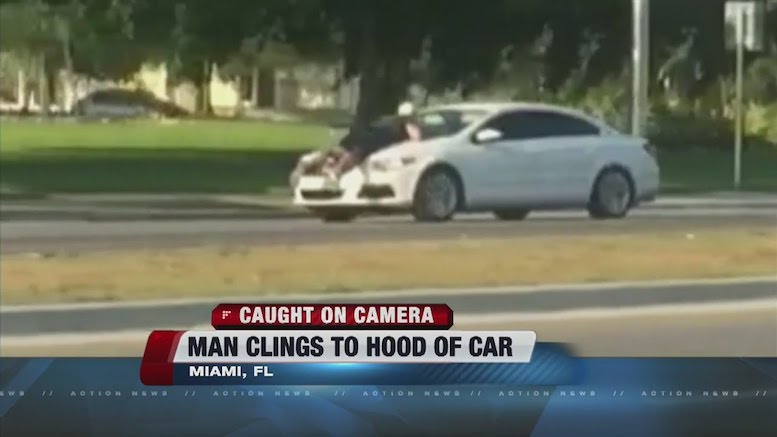 This surprises me, because it seems like just the situation in which a shorthand code term would be most useful.

Let’s say you’re clinging to the hood of a Chevy Impala going about 80 mph on I-270 near Rockville, Maryland, just to give an example. Personally, I would go ahead and cling on with both hands, since in this particular example, you ended up on the hood very suddenly, perhaps after unwisely standing in front of a vehicle you assumed would stay put, and so you didn’t have time to duct-tape or otherwise stick yourself to the hood in some way. No, your two mitts, and gravity, and some amount of friction, are the only things keeping you on the hood. I would not give up on any of those just to make a phone call that is unlikely to get you any help quickly enough to make a difference. But let’s say you did.

In that situation, it would be good to be able to just say, for example, “10-99, I-270 west 6A,” which would mean something like Officer involuntarily on hood of moving car, traveling west at high speed on I-270 approaching exit 6A, instead of having to explain it all on the phone while trying to hang on to the hood of a moving car with one hand. But there is apparently no such code.

I suppose the need for such a code might not have occurred to Charles Hopper, the man usually credited with inventing the “ten code” system. According to Wikipedia—though this has been hard to confirm—Hopper was communications director for District 10 of the Illinois State Police in the 1930s, when police use of radio was still fairly new, and radio equipment sucked. He suggested the first set of “ten codes” or “ten signals.” They were later standardized to some extent by the Association of Police Communications Officers, which published this bulletin in 1940 giving a list of “Ten signals” adopted for Illinois and neighboring states. I couldn’t find any mention of Hopper on APCO’s website, so that part of the story may be bogus, or maybe Hopper forgot to pay his APCO dues at some point. But whoever came up with the codes (there are competing sets, which is one reason they aren’t used much anymore), they didn’t consider “officer involuntarily on hood of moving car” likely enough to be worth a specific code.

This oversight meant Officer Christopher Jordan had to devote one hand to making a phone call while clinging to a speeding Chevy Impala on Monday. Jordan had observed an accident on I-270 that morning, and one of the drivers did not wish to hang around. “He had advised her he was a police officer,” a police spokesman said, “and she accelerated toward him” nonetheless.

This suggests, though it’s not entirely clear, that Officer Jordan is either not a Lowering the Bar reader at all or had forgotten what may be one of the most important tips this site has ever provided. See “TIP: If You’re Standing in Front of a Car, You Are In a Poor Negotiating Position” (May 6, 2013). I would encourage all of you to review that item again, partly because it seems a reminder is needed, and partly because it offers not one but two videos showing cars driving on the highway with a person clinging to the hood, videos that in my professional opinion are hilarious as long as you’re not the one doing the clinging. (And as long as no one got hurt, which somehow was the case in all the incidents mentioned here.)

In the main item discussed in that 2013 piece, the video was recorded on the phone of a citizen who—instead of calling the police—chose to drive alongside and record the incident. He did pretend to try to help by rolling down the window to chat with the man on the hood, who, not surprisingly, asked if he could perhaps call the police. The citizen said he would, but then yelled back, “Have you called them yet?”

I mocked him for that question, because as I said then, even if you have your cellphone with you in that situation, you’re not likely to have a hand free to make any calls. True, it worked in the Maryland case, but that man is a professional. Please don’t try it yourself.

But if you do, please have someone film it.

Woman Claims Display Was So Distracting, She Fell Over It