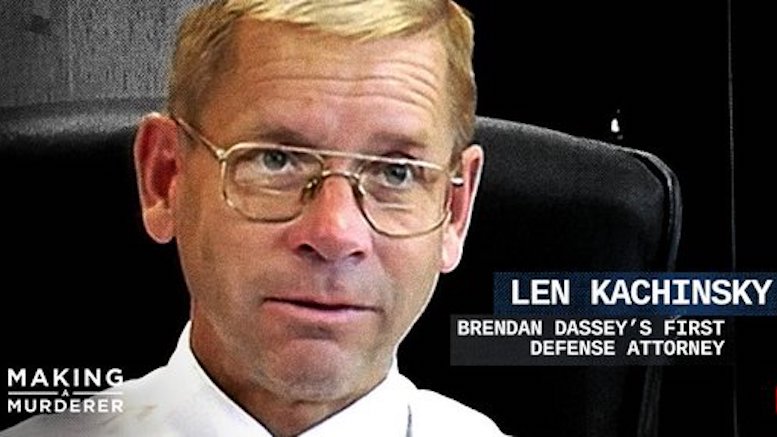 But not his last (image: Netflix)

When most of us last saw Len Kachinsky, he was busy botching the defense of Brendan Dassey, as seen in the Netflix series Making a Murderer. As you may recall, and as a Seventh Circuit panel later pointed out, after he was appointed “nearly all of Kachinsky’s work on Dassey’s case involved communicating with the local media….” Now, this is something defense lawyers occasionally do. But they generally don’t say things like “there is, quite frankly, no defense” while doing it.

I should say that I don’t do criminal-defense work, but I don’t think it’d be that different from my own work in the sense that my clients probably wouldn’t want me to go on TV and say things like “there is, quite frankly, no defense” when talking about their cases. I haven’t asked them about this. It’s just a feeling I have.

According to the panel, Kachinsky also: told the media he believed Dassey’s interrogation had been “standard and legitimate,” though at the time he hadn’t even watched the videos showing detectives saying a lot of questionable and suggestive things to his 16-year-old, developmentally disabled client; sent tips to the prosecution about the possible location of a murder weapon; allowed his investigator to meet with Dassey alone to try to get him to accept a plea deal; and allowed police to interrogate Dassey a second time without himself bothering to be present for the interview. The trial judge later found his work in the matter “indefensible and deficient,” granted his motion to withdraw from as counsel, and ordered that he not be appointed in any further felony matters.

I was therefore a little surprised to learn, as I just did, that Kachinsky was then and continued to be a municipal judge.

According to this February 2018 report by the Appleton Post-Crescent, Kachinsky “has been the municipal judge, an elected position,” in Fox Crossing, Wisconsin, “since 1997,” which would mean he held that position while he was semi-representing Dassey in 2006. Municipal judges there handle “forfeiture level traffic and ordinance violations,” but apparently not criminal matters, which I assume is why he was still eligible for criminal-defense appointments. More perplexing is how he got re-elected after the 2006 debacle, which must have been news locally even though the Netflix series had not come out yet. In any event, he was suspended from the bench in July of this year after he was arrested for violating a restraining order, and this is where we get to the meowing part of the story.

A court clerk accused Kachinsky of harassing her beginning in 2017, saying he had sent her inappropriate personal emails, posted personal information about her, and allegedly done a variety of other weird and creepy things. These included filing a reprimand against her for “refusing to acknowledge or return Christmas greetings from him,” mentioning that he had noticed her mother’s location on a Facebook feature called “Nearby Friends,” and sitting next to her desk “for almost 40 minutes tapping a pen on a legal pad in his lap, staring at her and making ‘cat noises’ until she was so uncomfortable that she left.” He denied or explained away most of the allegations, but a superior court judge granted a restraining order against him in February 2018. Police said Kachinsky sent her an email “almost immediately after this hearing” was over, which apparently is what resulted in his arrest and suspension. The restraining-order charges were later dropped, but Kachinsky was ultimately charged with felony stalking.

Kachinsky has previously conceded that he may have made cat noises on occasion, but said he did so only once or twice, perhaps to entertain a small child, and that even then the noises were made by a toy cat, not by Judge Len Kachinsky himself, though it’s not clear to me why that last point would make a difference. But at his trial last week, Kachinsky’s attorney seemed to go a little further, arguing that it was well-known that Kachinsky would occasionally meow or take other “quirky and odd” actions, which people generally found “endearing”:

“[Witnesses will testify that] he would be heard to meow randomly on occasion, that he would be whistling through the day when he goes to court and he would occasionally break into odd political comparisons not connected to the conversation they were having,” [defense attorney Brandt] Swardenski said.

The Post-Crescent didn’t report the details of the promised meowing testimony, an omission I consider indefensible and deficient under the circumstances. The clerk herself did testify to the cat-noises incident recounted above (among other things, of course), but so far as I can tell the Post-Crescent didn’t report on Kachinsky’s testimony on that point, if any.  So it remains unclear whether the alleged harassing incident would have been consistent with the “random meowing” behavior to which Kachinsky admitted (via his attorney). I guess we’ll have to wait for the Netflix series to learn more about that.

The jury got the case on Friday afternoon, but didn’t reach a verdict that day. After returning on Monday, jurors acquitted Kachinsky of the stalking charge. He immediately filed a petition asking the Wisconsin Supreme Court to reinstate him as a judge, though he conceded it might not be “practical” for him to return to the position, saying he might encounter a “hostile environment.” He still faces ethics charges filed by the Wisconsin Judicial Commission, so those might also make it impractical for him to return.

His former client, Brendan Dassey, will not be returning either. Though Dassey’s habeas petition was granted by the Seventh Circuit panel cited above, an en banc panel then disagreed and reinstated the conviction, choosing—in a 4-3 vote over a strong dissent—to defer to the state courts’ findings that Dassey’s confession was voluntary. (That opinion does not mention Kachinsky at all.) The U.S. Supreme Court recently declined to hear the case, meaning Dassey’s life sentence will stand.

Kachinsky has said he will run again for municipal judge in the next election, a sentence I have added mostly for the benefit of voters in Fox Crossing, Wisconsin.