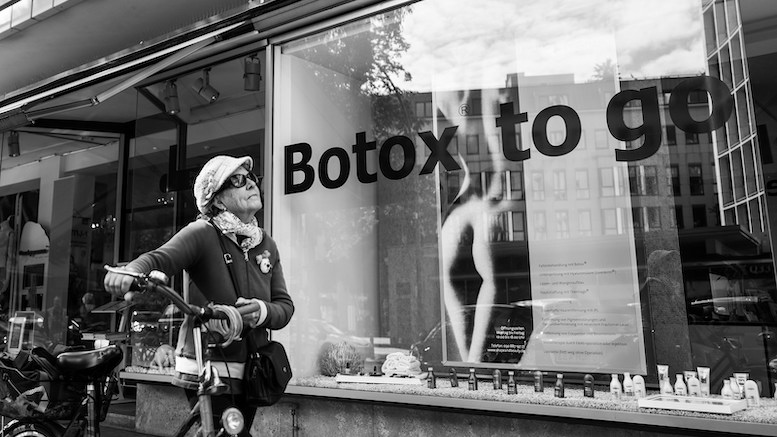 Not quite the same thing (image: Chris Candid via flickr, CC 2.0)

Los Angeles police are apparently still searching for two men who fled from a clinic after receiving cosmetic procedures worth about $4,000. Sources including Newsweek reported that the two men visited Sculpt DTLA last Monday, asked for Botox and “lip-fillers,” and eventually fled without paying. Police said if caught the men would be charged with grand theft.

The clinic’s director said its policies had been updated to help stop similar thefts in the future, and while he didn’t say which policies, I’m guessing he meant the one about not requiring clients to pay first.

A nurse at the clinic said the men seemed nervous before the procedures, which might not be too unusual given that at least one of the procedures involves being injected with a form of one of the deadliest toxins known to humanity in order to look a little younger. (Though, just to be clear, the form used in these procedures is considered relatively safe, and is not the super-deadly Type H, a mere two nanograms of which will definitely stop the aging process but not in a good way.) They also did not ask how much it would cost, which would seem to be a red flag, but the director said this did happen from time to time. But suspicions were finally raised when one of the men went to the bathroom and, after about 10 minutes, the other one “asked to go and locate his friend.” But by then, it was too late: the men bolted, reportedly looking fabulous.

Reports tend to refer to these men as the “Botox Bandits,” which is not bad but also in no way original. Even a brief search for that phrase turns up many cases of Botox banditry, including one in Phoenix last November, another L.A. case in October, and a London case last May involving three bandits caught on surveillance video after the botoxery (and therefore also described as the “puffy-faced trio” and the “swollen suspects”). Obviously, a lot of clinic policies need to be changed, because this is not at all uncommon, it appears.

But then you know that, if you paid any attention at all to the saga of the original Spa Bandit, a.k.a. Marshall G. Wolbers, a man in his mid-50s who plagued spas and salons in the Upper Midwest with similar misconduct during 2006 and 2007. See “Wisconsin Spa Bandit Strikes for Sixth Time” (Oct. 24, 2006); “Illinois Spa Bandit Seized” (Feb. 9, 2007) (he struck in both states, okay?); and “Spa Bandit Update” (Mar. 16, 2016). As the update related, judges let Wolbers off relatively easy for his spa crimes, but he later graduated to armed robbery. That, plus a “preposterous” defense argument (“‘There isn’t a jury on the planet that would’ve found you not guilty,’ Judge John Des Jardins told him”), is why Wolbers will presumably be receiving no beauty treatments to speak of until 2024.

Which is not to say spa banditry is necessarily a gateway crime, but it is a crime.

Notorious Felon and Terrorist Has No Trouble Flying, Thank You Very Much [Updated]

Woman Won’t Have to Pay for Her Own Cavity Search