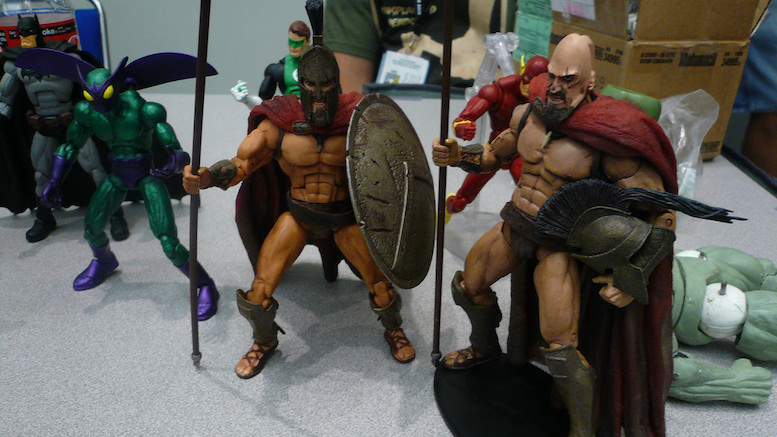 Do not touch (image: Cory Doctorow via flickr, CC 2.0)

Happily, no wives were harmed (or even present) during this episode, and of course there is nothing funny about most domestic disputes. But there is something funny about a 34-year-old man attacking his own car with an axe because he thought his wife had harmed some of his prized action figures. Hence, this shall become GRTK #75.

According to WMTV in Madison, Wisconsin (and via Keith Lee’s Twitter feed), police responded to a 911 call late on January 20 to find that the caller was also the suspect. They said the man had called 911 to report that he had “overreacted” after coming to believe (for a reason not provided) that “his wife had damaged some of his prized property (action figures).” The police blotter describes the overreaction as follows:

The suspect had wielded a log-splitting axe and after his wife had left the residence, he subsequently used the axe to destroy the TV, TV stand, laptop computer, and several other items in the house. The suspect then moved outside and smashed the family car, chopping off both side mirrors and eventually striking the windshield with such force that the axe became stuck.  When officers arrived, they found the axe embedded in the windshield of the car.

Probably realizing that somebody was going to call 911, the man proceeded to do so himself, and then surrendered peacefully to the responding officers. (Obviously, he couldn’t attack them with the axe, but the report says he was taken into custody “without incident.”)

And this does seem like a bit of an overreaction, but as Keith noted, the report is maddeningly incomplete: “I mean, what kind of action figures were they? Were they vintage? In box?” According to a number of sources (I’m sure some of you have better ones), like-new boxed-quality action figures can be worth thousands of dollars, and a 1978 Luke Skywalker (only 20 like-new specimens of which exist) went for $25,000 at auction in 2015. And any damage to a 1963 original G.I. Joe prototype figure (never even sold, a model created for the figure), one of which sold for $200,000 15 years ago, might actually justify taking an axe to the family car, although it’d be a close call. That was probably the only one of its kind anyway, so it’s very unlikely that’s what was at stake here. But we just don’t know.

Finally, the reports all say the man “believed” his wife had damaged his prized action figures,  from which I infer that he believed this incorrectly. (Sadly, we don’t know why.) So again, one of the many lessons these stories teach is that you should remain calm, take a deep breath or two, and confirm that you have actually been wronged before taking any action. (Okay, three lessons.) This greatly reduces the chance that you will overreact and end up, for example, with an axe embedded in your own car’s windshield.