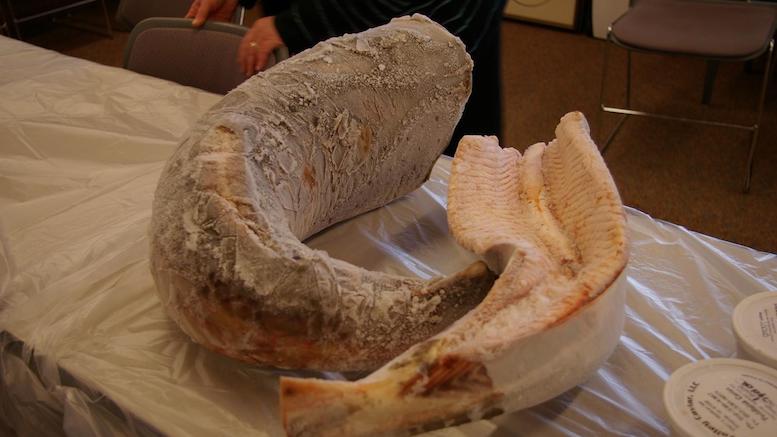 What am I bid for this tasty defendant?

As a reminder, this case was brought after two human defendants were arrested on suspicion of violating the federal Lacey Act, which as I’m sure you know prohibits trafficking in fish (among other things) that have been obtained illegally. The primary evidence against the human defendants seems to have been the testimony of an undercover officer who went fishing with them and was personally present when they hauled in a sh*tload of American Paddlefish (a protected species). Which is pretty good evidence, frankly.

While those gentlemen (or at least one of them) were being prosecuted for violating the Lacey Act, the U.S. government filed a “Complaint of Forfeiture in Rem” asking the court to declare that they had forfeited any interest in the property because it had been obtained illegally. (Res is Latin for “thing” or “property,” and rem is, I think, the accusative form you use when it’s the object of an action. Just in case that was bothering you.) The complaint lays out the basic facts of the investigation, noting among other things that the Paddlefish Defendants were seized on May 10, 2017, and have been in federal custody ever since. Importantly, it also notes that the Paddlefish Defendants were inspected and found to be “Grade A, and therefore safe for resale and human consumption.” 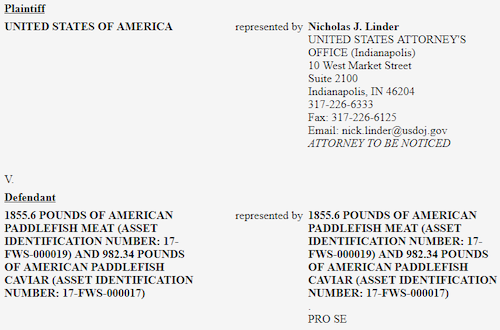 Looks like the defendants represented themselves. Almost always a bad idea, especially if you are fish.

But would they stay that way? No, because though they were defendants firmly ensconced in federal custody, they were also dead fish. This reality led to the next step in the case, the filing in November of the impressively named “Motion for Order Allowing Interlocutory Sale of Property and Substitution of Res.” In this motion, the government argues that it’s likely to win the forfeiture case, but the property will lose value in the meantime, so the court should allow the government to sell it now (thus “substituting” money for the “res”). Here, the U.S. argued, the Paddlefish Defendants are currently Grade A but their “likely date of expiration is rapidly approaching,” a date the U.S. predicted would be sometime “in March 2019.” But the sooner the better, it argued, because “no reasonable fishmonger would purchase fish meat and caviar close to the onset of the expiration date….”

Neither the defendants (paddlefish or human) nor any fishmongers (reasonable or otherwise) contested this, and the court promptly granted the order on November 19.

This meant the Paddlefish Defendants would be auctioned off to the highest bidder. But, for some reason, not immediately. Indeed, not until January 22 did the highly perishable defendants go on the auction block. The two-month delay is a little concerning, because the whole point is that the defendants are losing value while they remain in custody, unlike, say, Paul Manafort, who was bad to begin with. Not only that, the auction does not end until February 12, and granted, that is more than two weeks before the start of the defendants’ “likely [month] of expiration,” but one can still wonder whether any reasonable fishmonger would be comfortable spending not less than $95,380 (the combined minimum bid) for almost a ton of paddlefish meat and half a ton of paddlefish eggs that have been in federal custody since May 2017.

Interested fishmongers should also read the fine print, which contains what may be a highly relevant fact:

Assets have been in climate controlled storage since being seized in May 2017; temperature logs are not available.

So. Who will open the bidding for this ton-and-a-half of paddlefish corpses in federal custody that have been dead for 21 months but may or may not have been constantly frozen during that time, which coincidentally also included the longest federal government shutdown in American history, but is at least two weeks ahead of the absolute last date on which it could be sold, which is probably sometime in March?

Federal Government Learns There is “Obscenity” on Internet; Is Sort of Prosecuting It