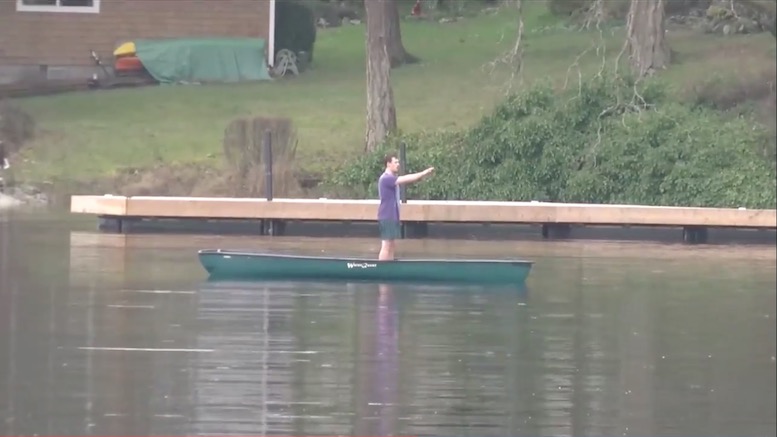 Clearly, there was a lot going on in the West Shore area of Vancouver Island, British Columbia, last Thursday morning. The RCMP dealt with a “suspicious package,” somebody stole and then crashed a vehicle, and a 93-year-old driver spent some time driving north in a southbound lane.

But I expect you’ll be almost as sad as I was to learn there was in fact no “canoe chase” as the headline promised.

Based on CHEK News’s report, all three of the morning’s events featured lots of excitement to begin with but nothing much came of them. And of course that’s a good thing, because each one could have been a disaster. The “suspicious package” turned out to be just loose electrical wiring at a bus shelter; the elderly wrong-way driver caused no harm, got a ticket, and police then gave him an escort home. (Probably because this was in Canada, so far as I can tell they didn’t shoot him even once.) Nor was anyone injured in the third incident, although the thief crashed the stolen truck into a light pole. (Probably because this was in Canada, the truck belonged to a good Samaritan who stopped to help someone, only to have that person—probably visiting from the States—steal his truck).

So really the broken promise of a low-speed canoe chase is the only sad part of this.

As many of you know, I have been trying to get the word out for some time that trying to escape by water is almost always a bad idea. Not just because it’s doomed to failure except in very specific circumstances, but because you may well be exposing yourself and occasionally others to serious risks in the meantime.

At best, you are likely to end up looking ridiculous.

As did this gentleman, who fled from the crash site into somebody’s backyard and down an embankment, where—obviously not having paid the slightest attention to any of my posts—he spotted the canoe shown above, leapt in, and sped away.

“Sped” of course being a relative term. I mean, he was moving infinitely faster than objects that were at rest within the local frame of reference, many of them permanently so. The shore, dock, and trees, for example, had absolutely no hope of catching him. But again, the problem is the lack of velocity, and potential velocity, relative to the authorities. Here you will virtually always be at a very significant disadvantage.

And that’s even if you remembered to bring the paddles with you.

The suspect was eventually tracked to Portage Inlet where he was found floating in a canoe that had been stolen from a backyard.

“Our primary concern was the safety of this individual,” said RCMP Const. Alex Berube.

Officers tried to negotiate with the man to return to shore.

“They recognized that he didn’t have any paddles on this canoe, so he wasn’t able to get very far. He was trying to paddle using his hands. Didn’t work out for him,” said [Const. Nancy] Saggar.

As with so many attempted water escapes, therefore, given that the suspect was not exactly “fleeing,” officers did not feel the need to “pursue.” They don’t need to. They can just wait.

And, eventually, this suspect realized his position (i.e., standing in a stationary canoe) was untenable, and ended up jumping into the frigid Canadian water and wading into captivity.

Given that this keeps happening, I still hold out some hope that one day, there will be a second canoe or similar watercraft nearby, and an officer so excited by the chase that he (and it will surely be a “he”) will immediately leap in and go after his quarry, and then I will be able to gleefully report there was a pursuit by canoe (or raft, pedal boat, or duck-shaped inflatable, as the case may be).

But sadly, not today.