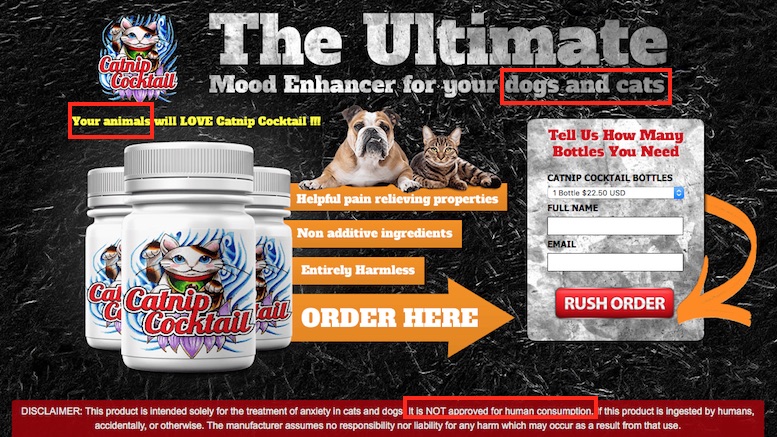 Ordinarily, “multiple incidents of individuals acting erratically near a strip mall” wouldn’t be cause for concern … well, maybe it would. You know what, I take that back completely. It would absolutely be cause for concern and possibly reason to suspect the zombie apocalypse was under way. That wasn’t the case here, luckily, but it was suspicious enough that (along with other evidence) it became probable cause for a warrant, one that police in Fairfield, New Jersey, executed on March 7. What were they looking for? Something called “Catnip Cocktail.”

That sure sounds like a street name for some new drug—and it turns out it kind of is. Because although “Catnip Cocktail” is marketed as an “anti-anxiety supplement” or “mood enhancer” for pets, police suspect it may also work on humans. Or, at least, it can cause them to act erratically near a strip mall.

According to the report, and I’ll just link to Gizmodo’s report through which you can reach the department’s Facebook page if you really want to, Fairfield police had encountered at least three cases in which citizens acting strangely in the vicinity of a particular strip mall were found to have bottles of Catnip Cocktail in their possession. Two of them had to be hospitalized. One had a receipt showing he bought the stuff at a Nutrition Zone store located in that strip mall, which was a little odd because that’s not a pet store. But selling it there is also problematic because it’s in New Jersey, where possession of Catnip Cocktail is illegal. Hence the warrant, and the seizures of evidence, and the arrest of the store’s owner on a variety of charges.

Why is Catnip Cocktail illegal in New Jersey? Because it contains something called 1,4-butanediol or “BD,” which the human body metabolizes into gamma-hydroxybutyric acid, better known to Bill Cosby as GHB—a “date rape” drug.  BD itself is apparently not on the federal list of criminally bad things yet, but it is on New Jersey’s list. Hence the criminal charges.

Only the finest ingredients

This is presumably the “1-4 BDO” listed as an ingredient on the “Catnip Cocktail” website as shown above, though that site may or may not have anything to do with the product seized at this Nutrition Zone. That list is not exactly confidence-inducing anyway, frankly—it sounds more like somebody who drank a bottle of the stuff just started making things up. But if you were doing that, you’d probably make up something more appetizing than “Rauwolfia Vomitoria Extract.”

And that is, apparently, an actual thing. According to this, the herb R. vomitoria actually has an effect similar to chlorpromazine, an antipsychotic drug, and is a traditional remedy in Nigeria, where it’s common. Dendrobium is a kind of orchid, and its extract may operate as a stimulant. Agmatine sulfate seems to have some effect on the brain, and it definitely increases blood flow in rabbits, which is neat. So these all seem to be things that actually exist and are at least believed to do something, but I wouldn’t have a lot of confidence that combining them all would be a great idea, even if the manufacturer had spelled all the ingredients correctly. Toss in that proto-GHB and you’ve got yourself some erratic strip-mall behavior.

So far as I can tell, the stuff does not have any actual catnip in it. The active ingredient there is said to be terpenoid nepetalactone, although that name too is almost certainly just made up. (Wasn’t Terpenoid Nepetalactone the prime minister of Thailand for a while? No? Maybe not.)

Anyway, to their (minor) credit, the creators of the website do provide a disclaimer saying that the product is “NOT approved for human consumption” and is intended only to treat anxiety in cats and dogs. But as the Washington Post has reported, you probably shouldn’t give it to them, either. Even if 1,4-BD doesn’t turn into GHB in animals (and it very well may), caffeine is hardly a good treatment for anxiety and it is generally toxic to pets. And then there’s all that other junk.

That’s probably why actual pet stores don’t sell it, according to the Post, nor of course is it something you should find for sale at Nutrition Zone, a store for humans. Nor could you find it, according to police, unless you knew what to ask for—it wasn’t out on the shelf. Which is a potential problem for the owner in terms of proving criminal intent.

“It seems quite suspicious to me,” Chief Anthony Manna was quoted as saying, “that an individual looking for something to sedate a cat with would come to a Nutrition Zone and not a veterinarian, to purchase a product that wasn’t even advertised or on display for the public to see.” He’s probably got a point there.

Attorney Who Bartered With Stripper Client is Suspended