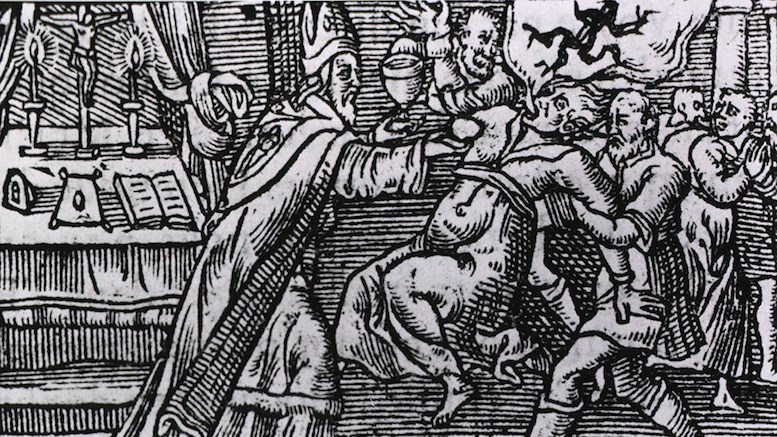 I just asked for the turndown service

If you’re traveling through eastern Kentucky, and are worried about demons, you might consider staying at the Hampton Inn in Perry County. According to a recent lawsuit, the management there tries hard to keep the place demon-free.

In the complaint, at which you can marvel here, Jason Fields alleges that he started working at Hampton Inn as a front-desk employee in June 2016, but quickly ran into issues with his manager. When she discovered he was going through a divorce, she explained to him that “the reason for his marital problems was that he had demons.” (Because she used the plural I assume she wasn’t talking about his wife.) And having determined that he had demons, she allegedly began to insist that if he wanted to continue working for her, he would need to be “cleansed.”

The complaint doesn’t explain exactly what this procedure would entail, but it says the manager told Fields it was “similar to an exorcism.” She had personal knowledge of this, she said, because “she had been cleansed three or four times,” according to the complaint. (It didn’t say what for.)

The manager also gave Fields a packet that contained one page of instructions, a two-page “release and indemnity agreement,” and a nine-page questionnaire that he was to fill out and return to her. It isn’t clear whether this was an official part of the cleansorcism itself or something the manager had put together on her own, but I am pretty sure it’s not part of the standard Hampton Inn employment packet. Not only did it ask Fields about his religious beliefs, which is not at all okay in an employment setting, it got real weird real fast:

h) Were you a planned child?
i) Were you conceived out of wedlock?
j) Have you personally ever had psychiatric counseling?
k) Have you, your parents or grandparents been in any cults?
l) Have you ever made a pact with the devil?
m) Have you ever been involved in Eastern religion?
n) Have you ever visited heathen temples?
o) Do you have any witches, such as “good luck kitchen witches,” in your home?

Obviously these are ridiculous questions, because who doesn’t have a few good luck kitchen witches running around the house? But it continued to get weirder, veering off after this into questions apparently designed to ferret out what the manager considers sexual deviance (or the demons that cause it). You can read those for yourself, but I’ll just mention two reasons those questions are problematic: (1) she didn’t define what she meant by “frequently,” and (2) the answer to the question “was their [sic] evidence of lust in your family line” is always going to be “yes,” since that’s how you get a family line started in the first place. That’s my understanding, at least.

The questions are problematic for other reasons too, I suppose.

Fields alleges that he ultimately did fill out the questionnaire, but then decided not to hand it over to her because the questions, or rather the answers, were quite personal. He also did not agree to be “cleansed.” He alleges that after this, the manager threatened to fire him and took adverse employment actions like changing his shift and not allowing him to take vacation. He’s suing for religious discrimination, constructive discharge, and intentional infliction of emotional distress, although Kentucky calls that last one the “tort of outrage,” which is way better.

A representative for Hampton Inn said the company was aware of the lawsuit and was looking into the allegations, which I assume does not mean they’re trying to find out just how many witches the plaintiff might have been keeping at home.