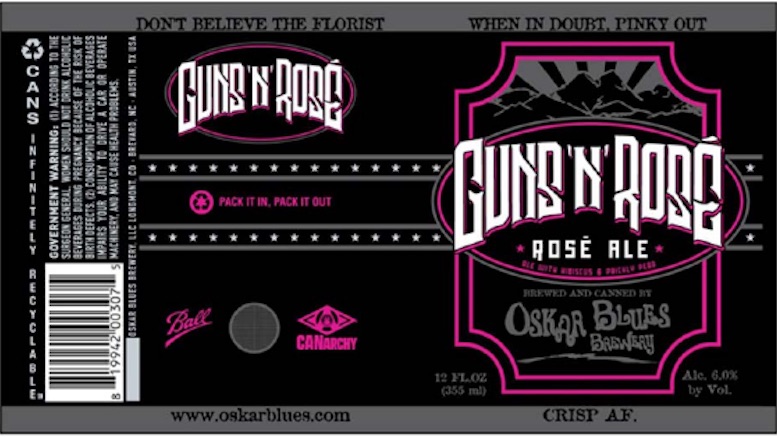 Welcome to the jungle, alleged infringer (image from complaint)

Well, this is very disturbing.

Not the lawsuit—those don’t disturb me at this point—but the realization after all these years that “Guns N’ Roses” only has one apostrophe. Well, I guess they have always been outlaws.

But having the correct number of apostrophes seems unlikely to protect the brewer of “Guns ’N’ Rosé” beer from allegations of trademark infringement leveled against it by the band, which filed the complaint below on May 9. According to CNN, the Colorado brewery tried to register its logo last year, but abandoned the application when the band opposed it. The lawsuit alleges GNR then asked the brewery to cease and desist, and while it seems to have agreed in general, it allegedly said it would continue to sell Guns ’N’ Rosé beer and merchandise until March 2020. Presumably it has an existing inventory of that stuff that it’d like to sell through rather than just discard, but GNR’s position is likely that it should have thought about that before it started using the similar name.

The complaint also tells us that GNR is a partnership organized under California law, its general partners currently being “W. Axl Rose (“Axl Rose”), Saul Hudson, pka Slash, and Michael McKagan.” Thankfully, the lawyers carefully defined the term “Axl Rose” to ensure that a reader would not confuse this Axl Rose with some other Axl Rose who might pertain to this lawsuit in some way, though no other Axl Rose is ever mentioned; but they somehow did not take the opportunity to write “Saul Hudson (‘Slash’).” Slash is never mentioned again by name, either, but if you’re going to insist on doing this kind of thing, how do you pass up an opportunity like that one? Baffling.

You are probably more interested in the fact that Slash’s real name is “Saul Hudson,” and I can certainly understand that.

The complaint also alleges a variety of facts about the band’s history and great commercial success (though it understandably doesn’t say a lot about Chinese Democracy). It also points out that GNR has produced not only music but a wide variety of merchandise, with which the defendant’s own merchandise is allegedly competing. GNR does not have its own brand of beer, though, or at least I infer that from the complaint’s failure to mention any such beer in this paragraph:

27. Defendant’s professed ignorance of “any instances of a musical artist or group using its name as the name of a beer was belied by GNR’s December 21, 2018 assertion [in its letter] that “many musical artists and entertainers have expanded or intend to expand in alcoholic beverages” including GNR contemporaries Metallica, AC/DC, Deftones, Anthrax, Iron Maiden, Motörhead, and Mastodon.

This was news to me, but the complaint reproduces an Instagram post purporting to show examples of “Metallica-branded, Sex Pistols-branded, [and] Grateful Dead-branded” beers, which the poster had juxtaposed with a can of “Guns ’N’ Rosé” ale. (He said he was looking forward to what he called “[his] own beerchella.”) Again, I infer that GNR has not yet entered this marketing space itself, but my guess is that it can stop others from doing so.

A Brawl That Maybe You Should Not Find Funny, But Probably Will