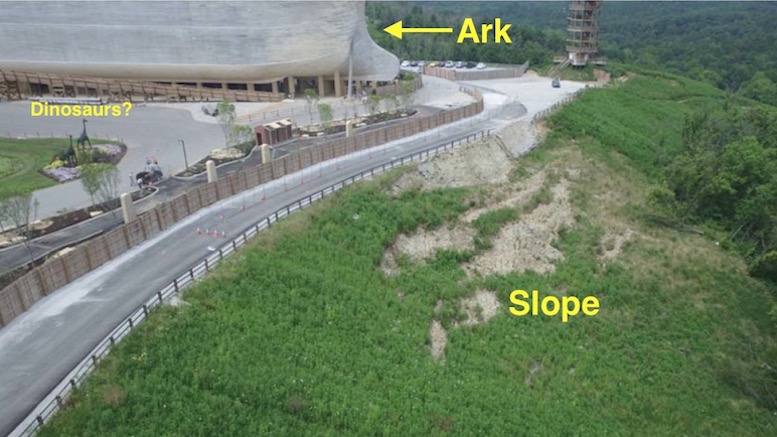 Site of the alleged flood (image from complaint)

To be fair, I should start by mentioning that to the best of my knowledge, the ark itself was undamaged.

But the company that owns it, and the Ark Encounter theme park in Kentucky where it now rests, are suing several insurance carriers to recover the $1 million it cost for the company to reinforce a slope and access road allegedly damaged by “heavy rains.” As you can see in the image above, the area in question is only a few dozen cubits or so away from the ark itself.

Depending on how long you think a cubit was.

The builders of this particular ark, who were hired by creationist Ken Ham, founder of the group Answers in Genesis, decided that the one Noah used was probably 20.4 inches long. This was controversial, because there were different “cubits” in ancient times, and the Bible does not mention which one God told Noah to use. It does tell us that Noah’s ark was to be 300 cubits long, 50 wide, and 30 tall, and made out of “gofer wood,” also sometimes transliterated as “gopher wood,” but it doesn’t really matter because nobody knows what kind of wood that was anyway. A “cubit” was generally between 18 and 21 inches, and as noted the builders decided to guess that God was talking about the “Hebrew long cubit.” Which is, in fact, a reasonable guess.

As a result, Ark Encounter’s ark is, according to Ark Encounter, 510 feet long, 85 feet wide, and 51 feet high. It is said to be “the largest timber frame structure in the world, built from standing dead timber, in part by skilled Amish craftsmen.” (The Bible doesn’t say Noah hired skilled Amish craftsmen, but it doesn’t say he didn’t, either.) The timber involved was mostly spruce and Douglas fir, with some pine, bamboo, and even plywood, but I guess that’s also fine. There’s 3.1 million square feet of timber in it, and it took a large crew of skilled craftsmen, at least some of whom were not Amish, almost two years to build. (I don’t see anything on the website about how Noah and his family accomplished it, but I haven’t had time to review all of it.) The theme park opened in 2016.

According to the complaint, which in and of itself is only slightly more interesting than the average complaint in an insurance case, meaning not at all interesting, the slope began to fail in May 2017. “[S]ubsequent to heavy rains,” though it doesn’t say how long they lasted, a significant landslide occurred. It ultimately cost about $1 million to shore up the road and substructure, and the plaintiffs made a claim on their insurance carriers for that amount. The carriers allegedly said no, relying on exclusions for the cost of “correcting defective design” and “repairing land improvements.” The carriers ultimately did pay part of the claim, but not the whole thing. Hence, the lawsuit.

Now, if the dispute is whether this constituted “correcting defective design” decisions by the builders, as it appears to be, that suggests the plaintiffs would have to argue that the damage would have happened regardless of any landscaping and/or improvement work they might have done. So it seems to me they would essentially have to take the position that the damage was an act of God, though maybe not as defined in the policy, if it has such a definition. Well, they can have their lawyers do it, which might help avoid that awkwardness.

But this leads directly to questions for which I must have (but probably will not get) the answers: Is the ark itself insured against floods, and if so does that policy have an exception for “acts of God”?

Somewhat less importantly, if it did rain long enough, would this ark actually float?

According to this Smithsonian article from 2014, a team of physics graduate students at the University of Leicester did the math on this and found that, yes, an ark of about this size could have floated—just barely—even if filled with animals (and a few people). They assumed the builders used cypress wood, and if so it would have weighed about 1.2 million kg (the article says the Titanic weighed 53 million). An ark that size could have carried about 2.15 million animals (assuming the average size was that of an average sheep), but whether that would be enough to cover two of every species on the planet depends on how many species there are, something else nobody knows for sure.

Ark Encounter says Noah only took two of every kind of animal, and there is support for that in the original text. I am just now noticing, though, that this text also says that during the Flood, “fifteen cubits upward did the waters prevail; and the mountains were covered,” which … does not quite seem to work out, based on the foregoing discussion in re cubits. Still, Ark Encounter may have a plausible explanation for that, too.

It is unlikely, however, to have one for its position that dinosaurs were around at the time, because that is just completely nuts.

Casey Anthony Sued for $3 Billion by … Someone

Do the Refs Have a Signal for the “Shorts-Holding” Penalty?