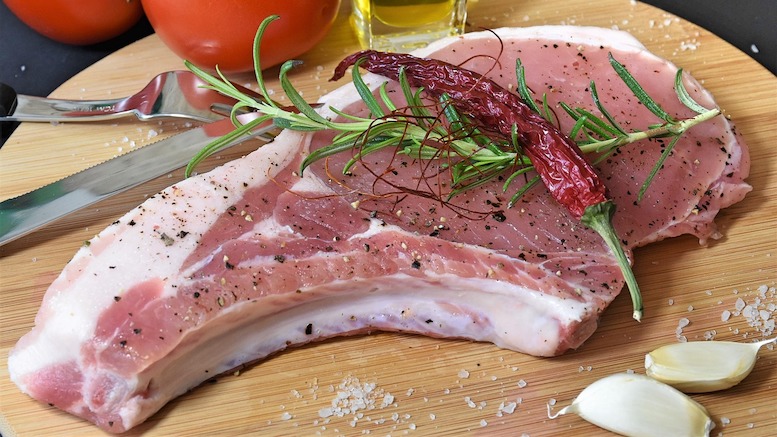 This just came in from the Australian bureau, and though it took almost 17 years to get here it’s still worth mentioning.

On winning the meat tray raffle at his local hotel on November 30, 1997, and with at least 15 schooners warming his belly, Mr. [Ross] Lucock strapped pork chops to his feet when told he would be barred from buying more beer because he wasn’t wearing shoes.

But the meat’s greasy residue caused Troy Michael Bowron to slip and fall, breaking his left arm and destroying his career in upholstery.

As is sometimes the case with stories from Down Under, part of this may need to be translated for American readers. 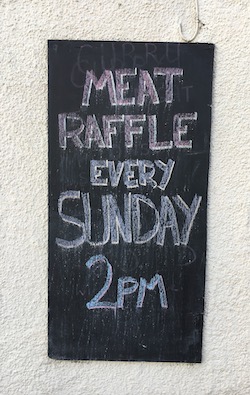 I guess most of it is straightforward enough, apart from the concept of a “meat tray raffle.” This was news to me, at least, when I came across this sign in Hastings a couple of years ago during my sabbatical in the UK. I knew what a “raffle” was, but had never associated it with meat, so the idea of a “meat raffle” seemed quite unusual and, for a reason I couldn’t quite articulate, vaguely sinister. I had to leave Hastings before Sunday (though not for that reason), so I never found out what exactly they were up to.

I’m not the only American who has been puzzled by this practice (see, e.g.,Elizabeth Gilbert, “The Meat Raffle,” The New York Times Magazine (Feb. 5, 2006)), but it is apparently common in Britain and at least some of its former colonies. According to Atlas Obscura, “[m]eat raffles first originated in Britain during World War II,” possibly as a response to food rationing, “and spread to the U.S. and other English-speaking countries after the war.” It did not spread to the Kansas City area, I can tell you that, but according to the same article it is still a thing at least in Minnesota, Wisconsin, and western New York, and may be spreading. But in any event, it is exactly what it sounds like: you buy a ticket, they have a drawing, and the winner gets meat.

Normally the meat is, presumably, eaten. But in the 1997 case, Mr. Lucock decided to put his pork chops to a different use. Well, he won the raffle, so the chops were his property and he could strap them to whatever he wanted. Wearing them as shoes was going to be problematic, though, especially since meat prizes are typically raw and therefore very slippery, but that’s what he did, in order to keep from being cut off. (Seems more likely he was going to be cut off because of the 15 “schooners”—if they cared that he wasn’t wearing shoes, I’m not sure how he got the 15 schooners to begin with—but this is what we’re told.) And someone did slip and fall—but not Mr. Lucock. Rather, a friend of his who was playing pool at the time apparently crossed Mr. Lucock’s greasy path and fell, breaking his arm and ruining what we’re told was a promising career in upholstery.

The friend sued Mr. Lucock and the pub, apparently arguing that the former created the risk and the latter failed to eliminate it by cleaning it up. According to the report, the plaintiff sought $750,000, and while Australian dollars were smaller then, that still seems like a pretty good payday for an upholsterer. But after a bench trial, the court awarded the plaintiff only $61,515, probably the amount of his medical expenses.

And the guy who wore the pork-chop shoes got off scot-free, apparently because the evidence showed the plaintiff knew his meat-shod friend was walking around near the pool table but did not ask the pub staff to clean up the mess or take any other action to avoid the known risk. The plaintiff not only knew what was happening, the judge noted, he “may even have joined in on the general pantomime that developed when pieces of pork chop disintegrated and were thrown around the room.” (“Pantomime” here presumably means something like “spectacle,” although I like the idea of everybody just miming how much fun they were having.) The judge ordered the pub to pay the plaintiff’s damages, suggesting the evidence showed there was some delay in cleaning up the consequences of its meat raffle.

Seems debatable whether these particular consequences were “foreseeable,” but that’s what the court held. Conduct yourselves accordingly, should you encounter one of these events.

Court Rules Woman Did Not Rob Man of Genetic Material

About That Religious Test