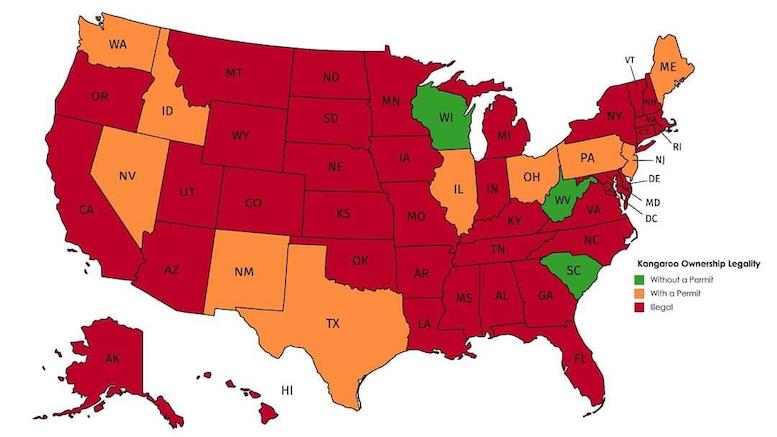 Frankly, any article that begins with the phrase “[a] map floating around the internet shows” should be viewed skeptically. This article, published by the Milwaukee Journal Sentinel, is an example of one that does not go on to include the sort of facts that inspire confidence. To be fair, the author is only concerned with kangaroo-ownership law in Wisconsin, but it’s still possible that someone might be misled by the description of the map itself as “sorta accurate.”

First a note about the source of the map. As the article notes, it was posted on the “MapPorn” section of Reddit, which is a section in which people post maps they find interesting or unusual. At some point the practice seems to have developed on Reddit to use the “porn” suffix in this way to mean “I think this image is really cool,” even if the image in question would in no way appeal to the prurient interest, as the Supreme Court might say. I subscribe to the “SpacePorn” subreddit, as it happens, because I like to use really cool astronomy images as computer wallpaper and lots of good ones are posted there, but if I were to say, for example, that such an image gave me a boner, I would be speaking only metaphorically. So that’s the deal here.

Most of the maps posted there are, in fact, really cool, at least if you are the sort of dork who, like myself, thinks maps are cool. They might or might not be useful, but that depends on whether you’re looking for a map that, let’s say, superimposes the border of the Austro-Hungarian Empire on recent election results in Eastern Europe, or one that shows the most commonly used type of electrical outlets in each country, or a heat map that purports to show where Lionel Messi tends to be found on a soccer pitch and how that has changed over time. If so, this is one place you might find those.

But there is, of course, no guarantee they’re accurate.

Nor are you going to get such a guarantee here, because not even I have time (at the moment) to research and document the kangaroo-ownership laws of all 50 states and the District of Columbia. (Also because actual guarantees cost more than the hourly rate you are currently paying me, as my disclaimer clearly states.) I will, however, look at Wisconsin, South Carolina, and West Virginia, at least briefly, because those are the only states in which the map claims kangaroo ownership is wholly unregulated, and thus the risk is greatest there.

The author of the article cites a state official for the proposition that “[t]here is no state law [in Wisconsin] requiring a permit to own a kangaroo.” That is literally true; in fact—and you may find this difficult to believe—the word “kangaroo” does not appear in any Wisconsin statute. But if you keep looking, you will find section 169.04: “No person may possess any live wild animal unless the person holds a license [to do so] under this chapter [or the falconry statute, which won’t help here]. That’s not good. Are there exceptions? Yes there are. If you want to have one of 17 specific kinds of “live native wild animals,” including but not limited to voles, porcupines, or any sort of arthropod, you are all set. But kangaroos are neither native nor on the list.

Are kangaroos “harmful wild animals”? Let us consult section 169.11, “Harmful wild animals.”  These include cougars, bears, and wild and feral swine. Good news! Except that the department of natural resources can designate other species as “harmful” by rule, if it is, for example, capable of inflicting severe physical harm. Can kangaroos do that? Yep. See also, e.g., “Kangaroo attacks on tourists prompt warnings to stop feeding them junk food,” The Guardian (May 1, 2018) (to stop feeding the kangaroos junk food, that is). Bad news.

Looks like it’s up to the department, then. What other species are “harmful wild animals,” according to it? Well, cougars, bears, and wild and feral swine, but we knew that already. Thanks for wasting our time, department. What else? Wolf-dog hybrids, and swans. (There is significant debate as to whether swans are really dangerous, but that’s for another day. I’ll just say that if I had to pick one of these animals to be attacked by, it’d be a swan, no question.)

The point here is this: kangaroos aren’t on the list. Good news!

But wait. That’s just state law. As the article points out, local governments also get to tell you what to do or not to do. And while in Wisconsin local ordinances are also not likely to use the word “kangaroo,” there are some that preclude ownership of what are often called “exotic” animals. The article cites Janesville, Wisconsin, as an example. The relevant ordinance there precludes ownership of “vicious,” “wild,” or “exotic” animals, defined (poorly) as follows:

“Vicious animal” means any animal … that constitutes a physical threat to human beings or other animals.

“Wild” and “exotic” animals mean any poisonous snake, constricting snake, tarantula, live monkey (nonhuman primate), raccoon, skunk, wolf, squirrel, fox, leopard, panther, tiger, lion, lynx or other warm-blooded animal which can normally be found in the wild state, any member of the crocodilian family including, but not limited to, alligators, crocodiles, caymans and gavials.

Emphasis added. That’s probably good enough for your nosy Janesville neighbor to get your kangaroo evicted.

In short, for this reason alone the map’s depiction of Wisconsin as a state in which you can freely own a kangaroo is simply not correct.

I know I said I would also look at South Carolina and West Virginia on this topic, but now I’m pretty sure neither one of us wants me to do that.