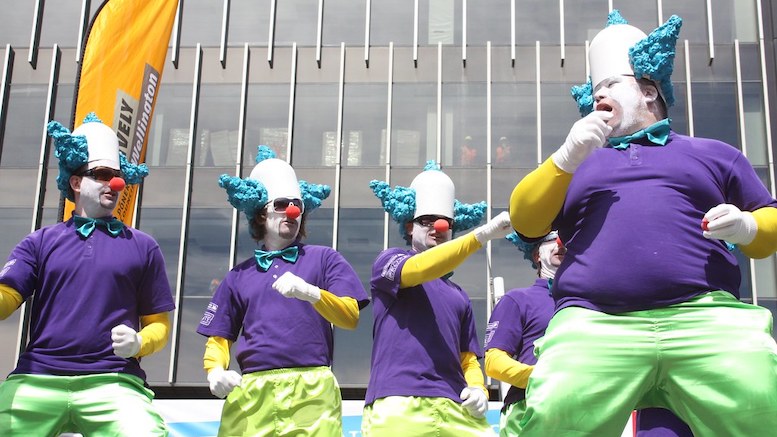 A holidaymaker dressed as a clown prompted a mass brawl on a cruise ship in which passengers used furniture and plates as weapons, according to witnesses.

I will be completely honest here. While this is a legal-humor site, that is a definition I’ve been willing to stretch before, and I’m going to be especially generous with it as to any report that includes the words “clown” and “brawl” in the same sentence. If it’s a mass brawl, the odds that I would find the definition inadequate drop to almost zero. So, even though calling this a “mass” brawl is arguably, and unfortunately, an exaggeration, here we are.

The brawl took place on the Brittania, a cruise ship returning to Britain from a week-long cruise to the fjords of Norway (another detail that increases the likelihood of coverage). According to a reporter who happened to be on the cruise, Richard Gaisford of “Good Morning Britain,” the ship left Bergen at 1430 hours last Thursday, and what he described as “an afternoon of ‘patriotic’ partying on deck” followed, “with large amounts of alcohol being consumed by many guests.”

It’s not clear to me why the partying was “patriotic,” unless they were just happy to be getting back to the UK, which is entirely possible. I don’t think it was an official UK holiday, although it was the 26oth anniversary of the British capture of Fort Niagara during the French and Indian War, and that seems like as good an excuse as any.

In any event, some sort of black-tie affair followed the afternoon of patriotic partying, and presumably even more alcohol was consumed during that affair. But the violence broke out at about 2 am in a buffet area, the reporter reported:

“One witness, part of a group involved in the trouble, explained to staff that things kicked off when another passenger appeared dressed as a clown. This upset one of their party because they’d specifically booked a cruise with no fancy dress. It led to a violent confrontation,” he wrote….

“‘There was blood everywhere’ [he continued, apparently quoting a witness]…. Witnesses told me they were so frightened they had to hide, as family groups fought…. The buffet area was immediately sealed off as medical teams went to help the injured. Staff told me they’d never experienced anything like it….”

Now, while I’m sure this was traumatic to those involved, Gaisford’s war-zone-style reporting might have been slightly exaggerated here. According to police, a total of six people were assaulted during the “mass brawl,” and the injuries included “significant bruising and cuts.” Only two of the six were arrested when the ship reached Southampton, from which I infer that they were the ones doing the assaulting. The report doesn’t say how significant the cuts were, but it seems unlikely that the use of furniture and plates by two to six people would have caused the ship’s buffet area to be awash in gore, as Gaisford seemed to imply (at least to me). I mean, if somebody threw a dessert plate hard enough to decapitate someone, the report probably would have mentioned it.

The real mysteries here, though, are what the clown was doing there and why his or her presence might have sparked violence. The report blames it on the assailants’ reaction to the clown’s perceived violation of a rule against “fancy dress.” The OED defines the latter as “a costume arranged according to the wearer’s fancy, usually representing some fictitious or historical character”; a “fancy dress ball” is one where everyone wears a costume. (In the U.S. we would just say “costume” or “costume ball,” or at least I would.) And the ship’s owner, P&O Cruises, does indeed have a dress code that precludes “fancy dress and novelty items or clothing” except for specific events. This clown would certainly have been violating it, and that would be irksome.

But I think we are missing some facts here. If the clown’s appearance upset people, why would that spark a “mass brawl” amongst “family groups” as opposed to just an assault on the clown? Was one of these groups the clown’s family? Was the clown injured, or arrested, or did he or she simply trigger the altercation and then manage to slip away unnoticed? And how does the only clown in the area manage to slip away unnoticed?

I suppose I should just accept this clown-induced-violence report at face value, but I am troubled.

To Boldly Snoop Where No Snoop Has Snooped Before