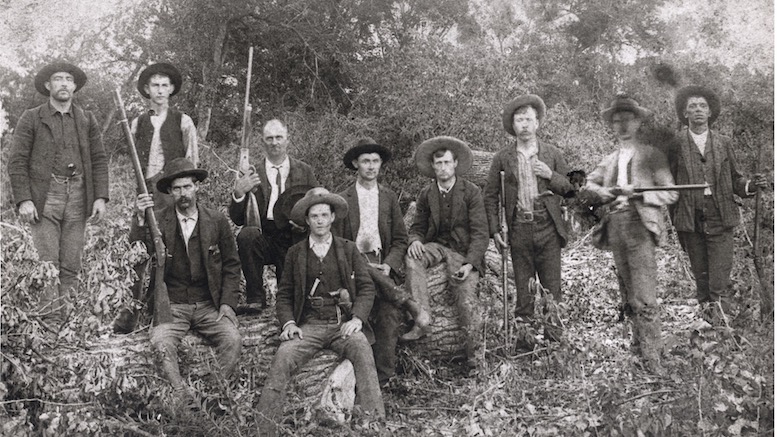 Guys who probably didn't have to be forced to join this posse anyway (image: Oklahoma Historical Society)

Until August 30, adult Californians who refused to join a posse could be fined up to $1,000 under section 150 of the state’s penal code. But on that date, the governor signed SB 192, so that requirement is now a thing of the past.

You can still join a posse voluntarily, of course, you just can’t be forced to do it.

Since 1872, the law in California has said this:

Most people are familiar with the word “posse” from movies, I think, but few realize that in most states—apparently all but four—it is in fact still illegal for them not to join a posse if the sheriff demands it. (I made fun of South Carolina for this in my book, The Emergency Sasquatch Ordinance, somehow still available on Amazon to this very day, but I was just picking on it as an example.) These laws date back not just to the original 13 colonies but all the way back to ninth-century England, according to this excellent post (excellent but longer law-review version here).

Today, of course, we have ginormous police forces who are very, very, very, very heavily armed and often quite eager to use those arms, but until pretty recently such a thing did not exist. If there was a problem that took more than one county sheriff to solve, he had to go out and get people to help him, which he did by exercising the “power of the county,” or posse comitatus. It was the duty of every able-bodied citizen to join if necessary.

Although it sounds like great fun, there just aren’t as many opportunities to form posses as there used to be. According to the state legislature’s bill analysis, it could not find any examples of the California Posse Comitatus Act of 1872 being put to use in the last 50 years. This is a little surprising, since the list of officers who theoretically have the power to force compliance include everybody from the Highway Patrol to the marshal of the California State Fair. But maybe they didn’t know they could use it. Too late now.

The repeal measure passed overwhelmingly. It was unanimous in the state Senate, and 63-5 in the Assembly. Only one group seems to have filed an argument in opposition. Can you guess who? Yes, the California State Sheriffs’ Association. “We are unfamiliar with concerns with this statute other than it was enacted many years ago and carries a fine for a person who disobeys it,” the sheriffs said. Yes, just because something was enacted during Ulysses S. Grant’s first term doesn’t mean it isn’t useful today, if you might be able to punish somebody with it. That’s what I always say.