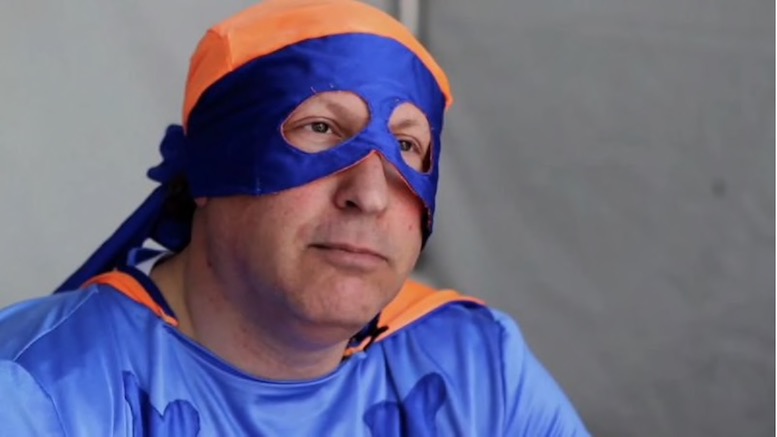 A former lawyer who masqueraded as a superhero character he called “Excuseman“—I don’t think I’ve mentioned in a while that these are all true stories, I don’t make them up—was sentenced to three years in prison recently, after pleading guilty to theft. In the plea, Jordan Margolis admitted he had settled several clients’ lawsuits (in one case without telling them) and then kept the money (in all cases without telling them).

“I fought for the little guy as a trial lawyer, against big corporations and insurance companies,” Margolis told the court at his sentencing hearing. “I dedicated my professional life to seeking justice.… My transgressions were well-intended but wrong.”

The wrongness is clear enough, but not what he meant by “well-intended.”

Margolis was a plaintiffs’ lawyer who apparently invested way too much in a particular case, a potential class action against Federal Signal Corp. on behalf of firefighters who allegedly suffered hearing loss from cab-mounted sirens. (Sirens are loud, you see.) “He had this delusional idea that this firefighter case was going to make millions of dollars,” the Chicago Tribune quoted an acquaintance as saying.

There were actually several such cases filed in various states, and it seems fair to say they were not overwhelming successes. According to this press release, at least, Federal Signal won virtually every such case that went to trial, and it looks like most of them didn’t make it that far. It did settle an Illinois case for $3.8 million (about $3,500 per plaintiff), but Margolis’s name is not mentioned in connection with that one.

Whatever happened, it does not seem to have involved the earning of millions of dollars by Jordan Margolis, as his lawyer attributed the transgressions to this fact. According to prosecutors, Margolis then embarked on a “classic Ponzi scheme”: paying off one client with settlement money that actually belonged to other clients, while keeping the leftover money for himself, and then doing more unauthorized settlements to get money to pay those other clients, and so on and so forth.

The problem with these schemes, as always, is that eventually one runs out of clients (or more accurately, victims).

Prosecutors said Margolis stole over $1 million from about a dozen clients, using the extra money to “support his lifestyle” and family and to pay business expenses after the siren suit didn’t go as planned. They also said he spent part of it “to pay expenses connected to Excuseman,” but the reports don’t say how much, or what exactly he spent it on. They do say he had self-published three books, had at least two “Excuseman” costumes, and had hired graphic designers and voice-over artists for some of his YouTube videos. But let’s just say that it seems likely the production values for all these put together would have fallen several orders of magnitude short of $1 million. Probably it mostly went to pay the mortgage, would be my guess.

The reports describe Margolis as a “[previously] successful personal injury lawyer … with a longtime interest in comic performance,” hence the skits and whatnot. Now, far be it from me to criticize a lawyer for having an interest in comic performance or any other sort of creative outlet for impulses not always entirely satisfied by, let’s say, product liability litigation. That’s a good thing. But if one’s comic performance involves a character named “Excuseman,” a character that purportedly strives to track down and punish those who make excuses for wrongdoing, then I feel one must be extra-careful to avoid doing exactly that oneself.

Because of course he did. Few Ponzi schemes would get very far without an array of excuses to deploy in response to questions such as: (1) when will I get the money you promised me, (2) how exactly are you investing this money, (3) when will I get my money back, (4) why did you suddenly flee to Morocco with my money, and most importantly (5) WHY IN THE NAME OF CHRIST DO YOU OWN 224 PAIRS OF SHOES INCLUDING 88 PAIRS OF IDENTICAL SHOES SOLD UNDER THE BRAND NAME “MR. CASUAL BELGIUM” AND DID YOU BUY ANY OF THEM WITH MY MONEY?

Questions such as these are bound to arise.

In Margolis’s case, while the statements he made at his sentencing hearing could be considered excuses, he was certainly making excuses to clients who wondered where their settlement money was. One said she had been unable to schedule a meeting with him for months because he claimed to have been traveling. “Tell Excuseman I’m tired of the excuses,” she testified she told his receptionist, demonstrating why the use of this particular character was problematic.

Again, though, it’s only problematic in this sense if you actually do the thing your character purportedly fights against. So by all means, if you would like to portray a superhero character in your advertising, I’m not saying you shouldn’t. I might even encourage it.

A Message from Lowering the Bar Regarding the Coronavirus

Strip Searches Lead to Discovery of Comical String Cite, Among Other Things

If Pajamas Are Outlawed, Only Outlaws Will Wear Pajamas