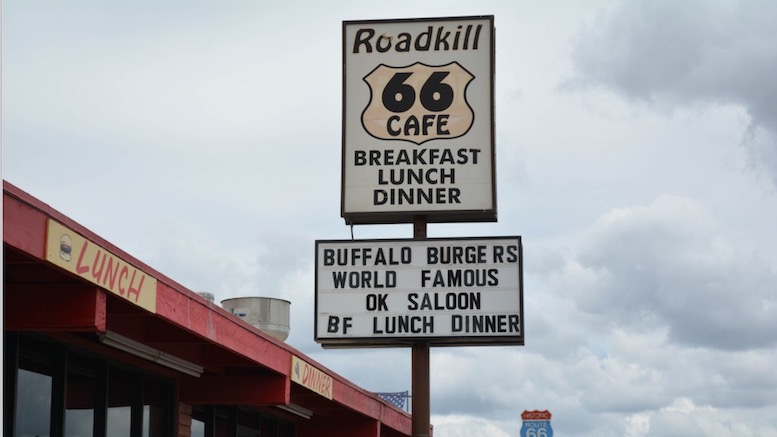 Probably not to be taken literally

The United States may be in the midst of a constitutional crisis (it is), and large sections of California may be on fire (also true), but at least our legislatures remain focused on dealing with the most important issues of our time. I speak, of course, of the rules that apply to the collection and eating of roadkill.

California is by no means the first state to address this issue. I have previously lauded at least two others (Montana and Illinois) for doing so, and according to the Sacramento Bee, about half of the states now have some sort of roadkill-harvesting law. That is, they allow people, under some circumstances, to take home and eat animals that they or other drivers have killed by hitting them with a vehicle.

Until now, only state and local agencies could legally remove an animal carcass from a California roadway (with exceptions, presumably, for emergencies). For many people, this has not been much of an issue. Speaking personally, at least, if I need animal parts, I get them from an animal-parts store. But then I am an urban person. For  hunters or others used to extracting said parts directly, it seems wasteful to leave perfectly good parts by the side of the road. (Well, they’re perfectly good for a while, anyway.) And we are, in fact, talking about a lot of parts here. According to the article, there are “an estimated 20,000 vehicle-on-deer collisions” in California every year—this presumably excludes collisions in which the deer was at fault—with another 2,000 or so similar incidents involving other animals. And if dead, should they not be eaten?

Especially since, in California, they might be pre-cooked when you find them?

Hence, California Senate Bill 395, which the governor signed into law on October 13. Known as the Wildlife Traffic Safety Act—though it doesn’t regulate traffic, doesn’t have much to do with safety, and definitely doesn’t involve wildlife traffic safety—the bill provides that it is no longer illegal in California for a person to “accidentally take” (i.e., kill or wound) a “bird, mammal, reptile, or amphibian by collision with a vehicle while that vehicle is being operated on a roadway,” just because one does not have a permit to do so. WTSA § 5 (amending Cal. Fish & Game Code § 2000.5).

That section, however, expressly does not authorize a person to possess such a bird, mammal, reptile, or amphibian. For that, one must get a “wildlife salvage permit.” Id. § 6. Section 6 authorizes a “pilot program” for issuing permits via a “cell-phone-friendly web-based portal.” (In other words, there will be an app for that.) Permits may be issued to someone who “unintentionally strikes and kills a deer, elk, pronghorn antelope, or wild pig on a roadway in California with a vehicle,” or to one who “encounters” such an animal. The pilot program must be in place by January 1, 2022.

It is of course important to point out various issues with the new law.

PLEASE NOTE that you should not take any action based on the above analysis, not just because this is a legal-humor website with a relatively prominent disclaimer but also because the pilot program is not yet in place. You should, therefore, continue to leave even the tastiest roadkill where you find it, at least for now.

Manitowoc Should Be Ashamed of This Planking Prosecution