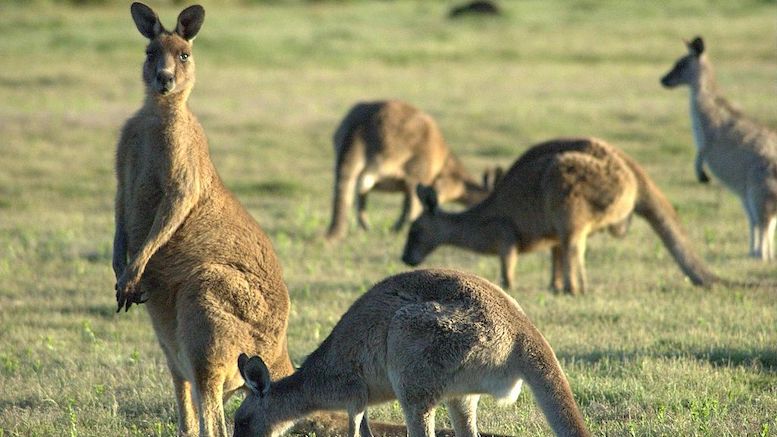 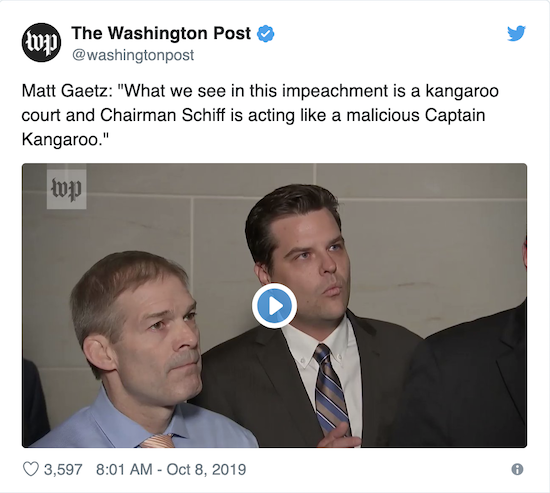 Yes, Rep. Matt Gaetz (R-FL), who invited a Holocaust denier to the State of the Union speech, once rear-ended a constituent’s car while gabbing on his cellphone, and was (and possibly still is) under investigation by the Florida Bar for trying to intimidate a witness, defended the president this week by saying that the impeachment proceeding is a “kangaroo court.” And not only that, he said, Rep. Adam Schiff is that court’s “Captain Kangaroo.”

If the situation were less serious, or if Gaetz were smarter, it might be possible to believe he was joking when he said this. But no one believes that.

As the Washington Post pointed out, “Captain Kangaroo” was “not a courtroom drama.” As most of you probably know, whether you ever saw it or not, it was a classic show for kids that aired for almost three decades, from 1955 until 1984, and in reruns until 1993. Bob Keeshan’s character always wore a jacket with big pockets, hence the name “Captain Kangaroo.” The show was somewhat similar to “Mr. Rogers’ Neighborhood,” with songs, puppets, cartoons, and so forth.

It was not a courtroom drama.

Granted, Gaetz is too young to have seen the show except possibly in reruns (he’s 37). But when a show is on for 30 years, it becomes part of the culture at least to some extent. The Captain’s original jacket and at least one of the puppets (Mr. Moose) are in the Smithsonian, for God’s sake. But more importantly, this wasn’t sprung on Gaetz out of nowhere. He chose to use this sentence, and generally speaking, it’s a good idea to know what sentences mean before you use them on national television. Although that appears to be optional these days.

But if a “kangaroo court” isn’t a court presided over by Captain Kangaroo, what is it? Well, even Matt Gaetz knows that the term refers to a proceeding that is not legitimate and/or fair to the accused. The more interesting question is, where does the term come from?

Australia? Apparently not. There don’t seem to be any early examples of its use there (though maybe an Australian could find one). The term “kangaroo” was well established in literature by the early 1800s, but “kangaroo court” doesn’t register at all until much later:

In fact, not until the turn of the (20th) century does it really get going, at least in literature:

To me that suggests the term did not originate in Australia, or else it would have spread along with the word “kangaroo.” But this is pretty weak evidence.

The OED, which knows more about these things, says the term originated in the U.S., and it cites an 1895 article in Harper’s that might have been responsible for the uptick in the graph above, discussing “kangaroo courts” set up by prisoners in county jails:

This is about the same time the term first appears in a U.S. judicial opinion. Hixon v. Cupp, 49 P. 927 (Okla. 1897). Cupp was arrested, couldn’t make bail, and while he was in the county jail the other prisoners put him on trial “in a pretended moot or ‘kangaroo’ court….” He was, unsurprisingly, convicted, and fined 50 cents. When he didn’t or couldn’t pay, he was “subjected to a penalty of 50 lashes and other infamous punishment.” Cupp sued the sheriff, claiming he knew all about the “kangaroo court” practice but did nothing to put a stop to it. He won, and the jury awarded him $150, or $3 per lash (less, if it also awarded him damages for the “infamous punishment”).

The OED‘s earliest reference, though, is to A Stray Yankee in Texas, published in 1853. This is available on Google Books, and coincidentally is the second volume I’ve seen into which somebody scanned his fingers, which I find amusing. See also “Google Might Need to Re-Scan Plato’s Laws” (Sept. 7, 2013).

“Philip Paxton” was a pseudonym for Samuel Adams Hammett, who was from New York but moved to the new state of Texas in 1848. He wrote “serious and humorous” articles about life there, and many of those were collected in this book, which he described as an effort to “give a correct idea” of an area “of which much has been written but little is truly known.” It purports to be based on things he actually witnessed, though of course you can never trust a humorist.

The term “Kangaroo Court” appears in Chapter XX, which describes a frontier town during “court week,” when the circuit judge would ride in to hear cases. “The people seem to look upon law as a species of amusement,” Hammett wrote—which I guess is still true—and so people would flock to town for court week. In the evenings, Hammett claims, not having had enough law during the day, members of the bar would convene mock courts for purposes of further amusement. Interestingly, though, the title of the chapter uses the term “mestang court” to describe this, not “kangaroo court”: 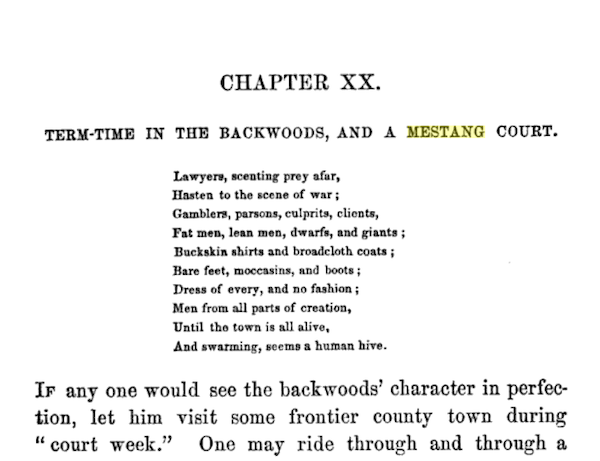 “Mestang” is his rendition of how Texans said “mustang,” as we learn a couple of pages later when the judge arrives “whooping and yelling down the street on a scrub of a mestang.” When we get to the mock court scene, the page heading changes to “The Kangaroo Judge,” and the “court” is described both ways:

Later, we get a mock indictment, said to be issued “at the special court of Kangaroo county,” part of the “Mestang Republic.”

This is also not strong evidence, but tends to support the theory that the term originated in the U.S. from the practice of judges riding or jumping from place to place to hear cases. They might have been called “mustang courts,” but if so “kangaroo court” won out.

The latter term was around in the 1840s, though. The author of “The Straight Dope” column suggested once that it might have originated in the 1840s during the Gold Rush, via “claim jumpers,” and Merriam-Webster found a reference to it dating back to 1841. That’s a New Orleans Times-Picayune article citing another newspaper’s report that “several loafers were lynched in Natchez last week upon various charges instituted by the Kangaroo court.” That might be another example of antebellum Southern humor, or just a report of some murders. Hard to say.

Ultimately, the origins of the word remain “obscure,” as Merriam-Webster said, but it is clear enough that there is no connection between “kangaroo court” and “the 20th century children’s television show “Captain Kangaroo.” Making that connection was stupid, but not the stupidest thing you’ll hear this week, that’s for sure.

U.S. Supreme Court To Consider Use of Expletives

President’s Counsel Writes The Onion to Demand Seal be Removed