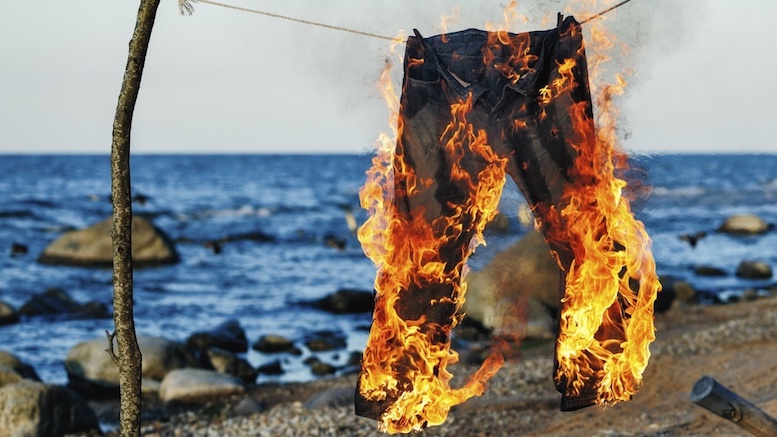 Well, we have an update on the case of the criminal-defense lawyer whose pants caught fire during closing argument in an arson case, because yep, that happened.

That was the March 2017 incident in which Steven Gutierrez was just beginning his closing argument when smoke began billowing out of his front pocket. He fled to the bathroom and extinguished himself, and upon returning told the judge that the problem had been caused by a defective e-cigarette battery. He insisted it was purely coincidental that his client was accused of arson and that the defense attributed that fire to spontaneous combustion.

I last updated that story in May 2017, at which time Gutierrez’s former client had decided he would plead guilty rather than be retried, and the investigation into exactly WTF happened in the courtroom was still ongoing. Last week, the ABA Journal reported that prosecutors had decided not to charge Gutierrez with a crime, but that he was likely to be suspended from the practice of law. The documents—primarily a consent judgment into which Gutierrez entered in August—give us some more information about the matter.

First, you might be wondering what crime Gutierrez was almost charged with, and the answer is apparently pants arson. According to the facts set forth in the consent judgment, the State had analyzed whether his actions during trial “rose to the level of arson under Florida law,” and decided they did not. I’m not sure how they could have. Under Florida law, a person is guilty of arson if he or she “willfully and unlawfully … by fire or explosion, damages or causes to be damaged” any “dwelling” or “structure,” or the “contents thereof” if people are known or likely to be present inside. The State concluded it could likely prove that Gutierrez “willfully caused the courtroom fire, but not that he did so unlawfully.” Okay, but wait—courtroom fire? The only damage was to his pants. I guess the State was thinking about arguing that Gutierrez’s pants were among the “contents” of an occupied structure, and it’s too bad we will be deprived of that. In any event, the State decided not to charge him with arson.

Second, we also learn a little more about the charges against his client, Claudy Charles. It turns out Charles was charged with second-degree arson for allegedly setting his car on fire in an effort to collect on the insurance policy. (Under the statute, vehicles are “structures.”) Unfortunately for that plan, a surveillance video showed Charles setting his car on fire. This presumably helped convince the jury to convict him, despite the dramatic pocket blaze Gutierrez allegedly set “as an attempt to demonstrate to the jury the feasibility of spontaneous combustion….” This was “a legitimate purpose, in theory,” the State conceded, although as I mentioned a while back, how deliberately setting a fire would help demonstrate that a fire could start spontaneously remains baffling.

Third, it turns out that the attempted pants arson, and his unlikely explanation for it, is not the main reason Gutierrez will get suspended. He also filed a civil suit on Charles’s behalf against GEICO, alleging it had breached its insurance policy by denying his claim. This was two months after Charles had been charged with setting fire to that same vehicle, but the complaint alleged the fire had been caused by a “vehicle collision,” not arson. Well, okay, the client has his side of the story. But a month later, the State announced it had the surveillance video. Gutierrez then amended the complaint, but still alleged that the damage was caused by a “vehicle collision.” Later, Gutierrez filed yet another amended complaint, still alleging it was a collision, not arson—but he filed this one after having seen the video, and more importantly, one day after the jury convicted his client of arson.

He later attempted to explain that the “vehicle collision” he’d been referring to was between the vehicle and the same vehicle’s door:

Despite that perfectly plausible argument, Gutierrez eventually dropped it and pleaded guilty (in the bar investigation) to violating, among other things, the rules that require lawyers to be honest and make only “meritorious claims.” The plea was in exchange for a relatively light disciplinary punishment, namely a 91-day suspension and two years of probation.

On October 25, the Florida Supreme Court said it wasn’t sure that was enough and was considering a one-year suspension instead. The parties have just finished briefing that issue. The state bar continues to support the shorter suspension, and I tend to agree, especially if what Gutierrez says about his difficult personal circumstances over the last few years is true. While there is still no good explanation for the pants fire, as I said last time, I think this guy has probably suffered enough.

Joe Francis Only Human “Startled” by $40 Million Verdict Against Him