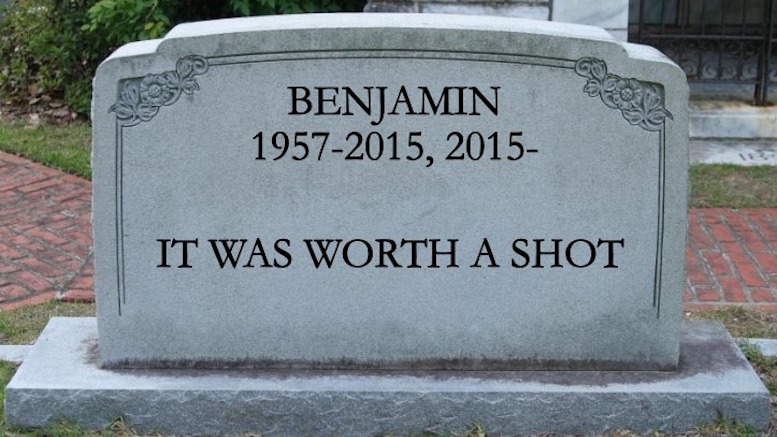 I don’t want to keep you in suspense, so I’ll tell you that this argument has already failed. It is, perhaps, a quintessential Lowering the Bar legal argument—not because it failed (though they often do), but because it shows again just how thin the line can be between clever and stupid.

Benjamin Schreiber is a long-term resident of Iowa, though probably not by choice; he was convicted of first-degree murder there and sentenced to life without parole. He filed two applications for post-conviction relief that were both rejected. But then he got his big break: he died.

Or so he claims. According to the Iowa Court of Appeals, Schreiber suffered from serious kidney problems in March 2015 and developed septic poisoning. He lost consciousness and was taken to a hospital where he was “resuscitated” by “receiving ‘adrenaline/epinephrine via an IV.'” Doctors then performed surgery to fix the organ damage and treated the poisoning with antibiotics. Schreiber was then returned to his residence.

Three years later, Schreiber filed another application, which the court summarized this way:

In it he claims he momentarily died at the hospital, thereby fulfilling his “life” sentence…. Because his sentence has been fulfilled, he argues, he is imprisoned illegally and should be immediately released.

The State moved to dismiss, and the district judge granted the motion. “Nothing in the record supports petitioner’s claims,” the judge held. To the contrary, she pointed out, the evidence suggested he was not dead, in that “[t]he petitioner’s filing of these proceedings in itself confirms the petitioner’s current status as living.”

To further confirm this, Schrieber appealed. Among other things, he argued that the district court erred by dismissing his application without an evidentiary hearing. Unfortunately, the opinion doesn’t say what evidence he planned to offer. But the Court of Appeal decided that a hearing was unnecessary, noting that dismissal is appropriate “when there is no conceivable state of facts” that might support the claim.

First, the court summarized the claim:

In essence, Schreiber claims that he “died” and was resuscitated by medical staff in 2015 against his wishes, thereby completing his sentence. He asserts he was sentenced to life without parole, “but not to Life plus one day.” Therefore, he is being held in violation of his rights under the Due Process Clause and the Fifth and Fourteenth Amendments to the United States Constitution.

I forgot to mention that Schreiber says he was resuscitated against his wishes. And, in fact, he had signed a “do not resuscitate” directive, but doctors saved his life anyway. The district court did not address his argument that saving his life violated his due process rights under the circumstances, so the Court of Appeal didn’t address it, either. Schrieber has already sued the doctors who saved him, but that case was dismissed on procedural grounds.

Thus, the appeal focused on his argument that because he had been sentenced to “life” under section 902.1 of the Iowa Code, he completed that sentence on March 30, 2015, when he died.

Section 902.1 says that a defendant found guilty of a class A felony, such as, let’s say, beating a guy to death with an ax handle, shall be committed “for the rest of the defendant’s life.” In what could be considered an oversight, the statute does not define the term “life.” Schreiber argued that he had been sentenced only to serve one “life,” not “life plus a day.” And everybody knows that a life sentence ends when you die, and he died, so there you have it.

First, it isn’t clear that Schrieber actually died, even temporarily. His application says he was suffering from seizures and convulsions, had a high fever, and “became unconscious.” The hospital called his brother to ask permission to “save/work on Applicant,” which suggests things were pretty dire, but also suggests Applicant was not quite dead. Next, he says, this happened:

This doesn’t actually say Schrieber’s heart stopped, but maybe that’s the only situation in which you’d pump somebody full of those particular drugs. The application does also claim that CPR was performed. But even if his heart did stop, even more than once, these days we wouldn’t call that “death” just because it happens. If someone survives a heart attack, that’s great, but we don’t act as if they’ve been resurrected. If someone survives open-heart surgery, we wouldn’t say they had “died” even though the heart is stopped for hours and the person is connected to a heart-lung machine. So the facts seem to fall a little short of death here.

The Court of Appeal focused instead on the (statutory) meaning of “life.” Though not defined, the “plain reading” of the statute, it held, is that a defendant “must spend the rest of their natural life in prison, regardless of how long that period of time ends up being or any events occurring before the defendant’s life ends,” even if one of those events is, arguably, death. “We do not believe the legislature intended” for resuscitation to terminate a “life” sentence, the court held, and that is surely the right answer.

The court then concluded, “Schreiber is either alive, in which case he must remain in prison, or he is dead, in which case this appeal is moot.” That seems like the wrong answer, or at least the wrong reasoning, because Schreiber isn’t claiming to currently be dead. His claim is that he was alive, but then he died, and when he died, his “life” sentence ended. That he then came back to life is irrelevant, at least according to him. So, the mootness line is a good one, but the legislative-intent argument seems like the right one here.

According to the New York Times, this has been tried at least once before. In 1988, a New York inmate serving a life sentence asked to be released because his heart had stopped during surgery. Did he believe that everyone whose heart stopped during surgery should thenceforth be considered legally dead, the judge asked him, with all the consequences that might follow? “Yes,” said the inmate, who the Times noted had “earned several law degrees from correspondence schools during his 25 years in prison.”

“I know this is far-reaching,” the inmate conceded, “and I’m opening up a can of … not worms, but boa constrictors.” That judge rejected the argument, and the Iowa Court of Appeal’s decision to do the same will keep the boa constrictors at bay that much longer.