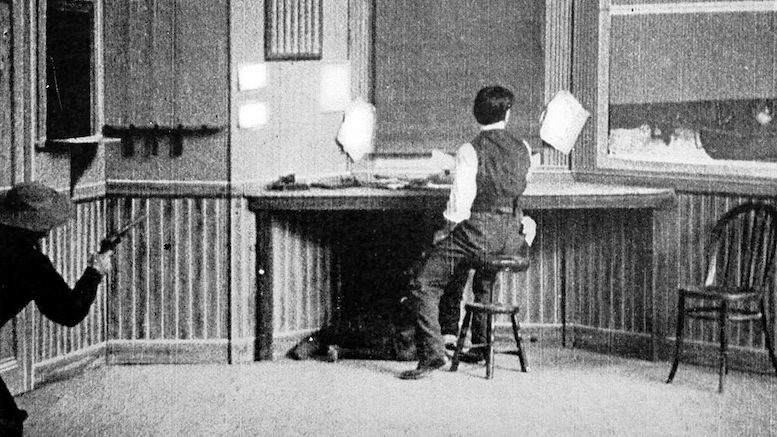 That'll teach him to look out the window (image from The Great Train Robbery (1903); public domain)

The Las Cruces Sun News reports that a Subway shop was robbed Monday night by an employee and an accomplice, which is unfortunate but wouldn’t be news except for the employee’s explanation. Police said the employee admitted she was involved but “indicated she wanted to teach one of the [other] employees a lesson about what could happen late at night in that part of town.”

If the lesson was “you could be robbed by me and an accomplice,” then lesson learned, I guess.

The report is short on details, but says that the two robbery teachers entered the store about 7 p.m. (not “late at night,” ruining that part of the lesson), and “verbally and physically threatened the employees,” ushering them to the back. (One fled, and called police.) There’s no mention of a weapon, and the report says only that they were charged with robbery, which is “the theft of anything of value” from a person “by use or threatened use of force or violence.” The alternative would have been “robbery while armed with a deadly weapon,” and under New Mexico law “deadly weapon” is defined quite broadly:

So basically, under New Mexico law, a “deadly weapon” is any weapon that’s deadly. And as we’ve seen, prosecutors have been willing to define such statutes broadly enough to charge someone with using a “deadly weapon” even if they didn’t have a weapon. See “Ninth Circuit Grapples With Whether Bare Hands Are ‘Weapons’” (Mar. 2, 2010) (its conclusion: no). I infer from this that the New Mexicans in this case were unarmed.

It’s too bad they weren’t armed with poniards, because that would justify this paragraph noting that New Mexico is one of only three U.S. states (congratulations, Indiana and West Virginia) that specifically mention poniards in their statutes. A poniard, as you of course know, is a straight double-edged stabbing weapon that’s longer than a dagger but shorter than a rapier, the kind of thing you’d expect to see being waved around in Hamlet but not so much in New Mexico. We could debate that definition, but this is exactly why having these enumerated lists is often just a big waste of time. It causes confusion (see, e.g., People v. Castillolopez, 63 Cal. 4th 322 (2016) (concluding that a Swiss Army knife isn’t a “dagger”)) although on the other hand it gives legal-humor writers something to do (see, e.g., “Is an Alligator a ‘Deadly Weapon’?” (Feb. 12, 2016) (concluding that it depends)). This is presumably why even Texas dropped the “poniard” in 2017, streamlining the law and just going with “knife,” defined broadly as “any bladed hand instrument that is capable of inflicting serious bodily injury or death by cutting or stabbing….” One of many potentially deadly weapons, of course.

Anyway, they don’t seem to have been armed with poniards.

They do seem to have been wearing masks, because the report says one of the robbers’ co-workers “identified her by her voice,” which is one of the risks of robbing the place where you work. An officer responding to the escapee’s call noticed a Kia Optima “parked suspiciously in the area,” and maybe one day we will hear more about how suspicious parking constitutes probable cause, but in any event the Optima turned out to contain the two suspects.

It was at this point that the robber deployed the “teach them a lesson” excuse. I would rate this as above “did it only to research the criminal mind” and “it was a film project” but well below “would rather go to jail than keep living with my wife.” Again, such enumerated lists are not really necessary but give legal-humor writers something to do.

Russian Judge Snoozes on the Bench (and on Video)