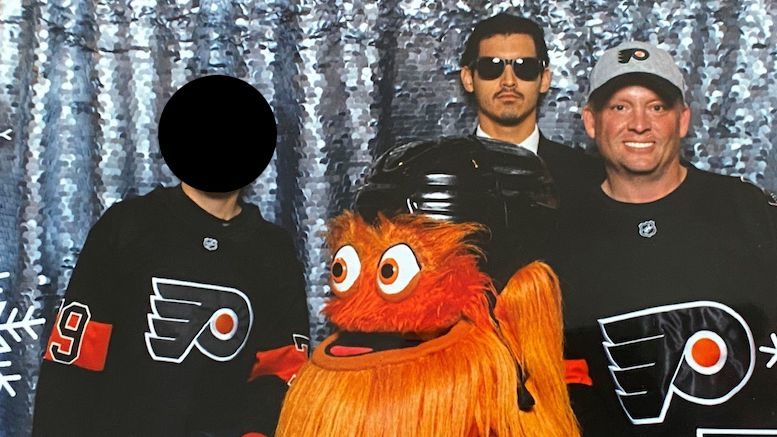 I did the black circle, not Gritty. That's not the issue.

Police in Philadelphia say an investigation is “active and on-going” into allegations that the Flyers’ mascot, Gritty, punched a 13-year-old boy last year.

This is apparently the first time Gritty has been accused of assault, although he has only existed since 2018.

According to the Philadelphia Inquirer, Chris Greenwell alleges that he and his son visited the Wells Fargo Center last November for what was described as “an exclusive event for season-ticket holders,” and waited in line for about an hour to get a photo with Gritty (and, apparently, Gritty’s bodyguard?). They got the picture (see above), but then the allegedly unthinkable happened:

In Greenwell’s telling, [his son] playfully patted the mascot on the head after the photo was taken. As [the boy] walked away, Gritty got out of his chair, “took a running start,” and “punched my son as hard as he could,” Greenwell said Wednesday.

Greenwell said he took his son to see a chiropractor about a week after the incident. The chiropractor noted that [his son] suffered from mild pain, and diagnosed him with a back bruise, or a “contusion to lower thoracic spine with subluxation,” according to documents from the chiropractor, provided by Greenwell.

It isn’t clear from the report when Greenwell complained to the team about the alleged assault, specifically whether it was before or after the visit to the chiropractor. The Inquirer says only that he emailed them “after the alleged punch,” complaining, first, that the photo opportunity was inadequate because Gritty failed to look at the camera. And as you can see, Gritty is indeed guilty of that. But Greenwell then also mentioned the “more serious and disappointing” concern that Gritty had sucker-punched his kid.

“I know it was not correct for my son to harmlessly tap [Gritty] on his head,” Greenwell wrote in the email, “but for a Flyers employee to … throw a full punch at someone with his back turned and hurt a 13 year old boy is assault, unprofessional and unacceptable for your organization.” It certainly would be. To the best of my knowledge, pretty much every sports organization has relatively strict rules against clobbering anyone under 14. But did it happen?

The company that owns the Flyers says no—or more accurately, that its investigation was unable to confirm Greenwell’s account of the mascot attack. Suspiciously, or not, it said there is no video footage that could confirm or deny the account, because “cameras in that area of the center are focused on other locations,” and presumably because they checked those cameras and found that none of them recorded Gritty punching any 13-year-olds. But it said it had also interviewed a number of people (and at least one mascot), and told Greenwell it had been unable to “identify anyone who witnessed the incident as you described it.”

“We took Mr. Greenwell’s allegations seriously,” a spokesperson said, “and conducted a thorough investigation that found nothing to support this claim.”

It might also be an issue, arguably, that the Greenwells saw a chiropractor rather than a medical doctor. As I have mentioned before, I’m not saying that field is necessarily bogus (chiropractic testimony seems to be admissible in court, sometimes), but I do think it’s relevant that its first practitioner was a former beekeeper who said he heard about it from a dead guy. But we don’t need to resolve that here, because so far only the Greenwells’ testimony links the contusion to lower thoracic spine with subluxation to Gritty.

Still, the Flyers offered to discuss letting the alleged punchee sit on the players’ bench during warm-ups before a game, or come up with some other “creative way to restore [his] love of the Philadelphia Flyers.” Greenwell seems to have countered with a demand that his son be shown on the Jumbotron, but whatever the proposals were, no deal was reached. It was at that point that Greenwell reported Gritty to the authorities. As noted, that investigation is continuing.

As the Inquirer also notes, Philadelphia mascots do have a history of violence, or at least allegations of violence. See Robert Jarvis & Phyllis Coleman, “Hi-Jinks at the Ballpark: Costume Mascots in the Major Leagues,” 23 Cardozo L. Rev. 1635, 1661 (May 2002) (stating that at the time, the Phanatic held “the dubious record as the most-sued mascot in the majors,” a finding that desperately needs to be updated). But Gritty, of course, must be considered innocent until proven guilty.

Does the example of (and this is just an example) the $2.5 million jury award against the Phanatic et al. have anything to do with the Greenwells’ current allegations? Well, Greenwell told the Inquirer he hasn’t hired a lawyer. But he didn’t rule it out, either.

Anybody Missing a Coffin Full of Weapons?