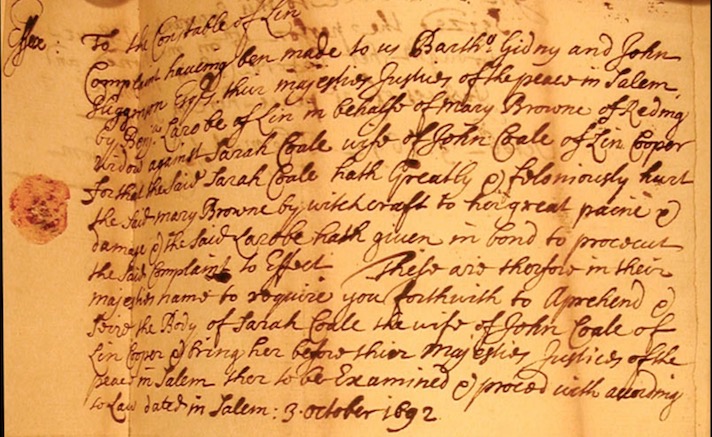 The 1692 arrest warrant for accused witch Sarah Cole, who probably didn't have the option to try an alias

Well, it’s happened again. A person trying to dodge an arrest warrant has given the police a different name only to learn that there is also a warrant out for that person. I guess you don’t really have time to research names if you’ve been stopped by the police and need to come up with something fast, so normally I would attribute this to very bad luck. But sometimes people do contribute to their own downfall.

In the most recent case, a Texas woman named “Shareeka Strawn” allegedly gave police the name “Porshala Strawn” during a traffic stop. She did this because there were, at the time, five outstanding warrants with her real name on them. Unfortunately, it turned out that there was also a warrant out for “Porshala Strawn,” so Shareeka was arrested anyway. Her real name and the five warrants came to light not long after that.

The report doesn’t say whether she knew there was a real person named “Porshala Strawn,” or just picked a fake first name at random that happened to be a poor choice. The former seems more likely, under the circumstances. If so, that would also raise the question whether the two Strawns are related, and if they are, then this would be one of those cases where it would behoove one to know whether one’s relatives have criminal records.

This recent Florida incident was definitely one of those cases. Jacob Hisel didn’t want to give his own name when police stopped him in July, because there were two warrants out for his arrest. So he gave his brother’s name, which might have worked except that, as he presumably did not know, his brother is also wanted. Jacob was arrested on that warrant, and fingerprints brought his real identity to light.

Ironically, had he just kept his mouth shut, this probably would not have happened. The report says police stopped Hisel for his own safety because he was “walking in the roadway,” not because they had probable cause. While Florida has a “stop-and-frisk” law that allows police to detain someone temporarily to “ascertain the identity” of that person, it doesn’t apply unless police have at least reasonable suspicion of criminal conduct. (The law wouldn’t be constitutional otherwise.) That doesn’t seem to have been the case here (unless jaywalking counts, which it shouldn’t). So Hisel could have just kept walking, or at least kept quiet. (This wouldn’t apply to Strawn, who was driving.) But by speaking up and giving a fake name, Hisel just committed a(nother) crime.

A poor choice of relatives was also a problem in a similar case I mentioned a while back. See “Tips on Choosing a False Identity” (Jan. 11, 2011). In that case, a man gave police his cousin’s name during a traffic stop—only to learn that the cousin was also wanted by police, and on a charge of “fondling an underage relative” to boot. On the other hand, maybe police who suspect an alias are trained to tell people something like that, because it probably results in an instant disclosure of the person’s true identity (or at least a different one than they gave the first time). This particular detainee was suing the county at last report, so maybe the whole thing was just a big misunderstanding.

Choosing a name at random would have the benefit of keeping your relatives clear of the matter, plus the odds should be better. The randomly chosen name may not even belong to a real person, after all, let alone one wanted for illegal fondling. That might or might not be what happened to the other guy mentioned in that 2011 post, whose name was “Jonathan Gonsalez” but told police it was “Timothy M. Koop Jr.” If that was a randomly chosen name, then it was just a spectacularly bad coincidence that Timothy M. Koop Jr. was also wanted. If not, then presumably Koop was an acquaintance (though not a cousin), and similarly it would behoove one to know whether one’s acquaintances tend to have criminal records.

Or just to keep one’s mouth shut. Yes, that would probably be best.