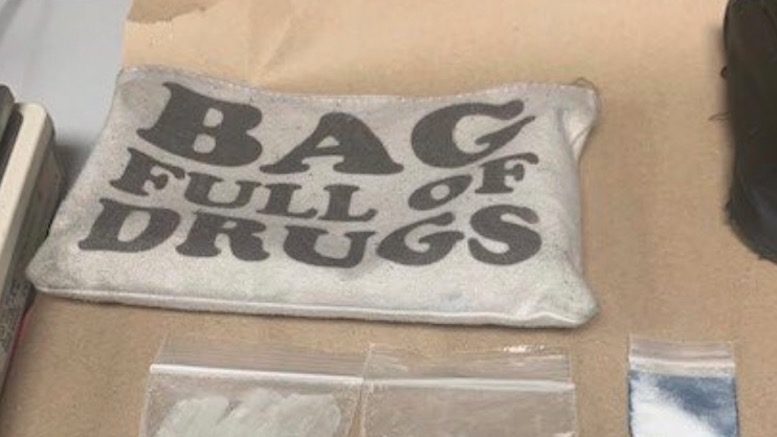 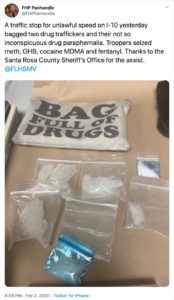 There’s probably some room for debate as to just how full it was, but the label seems to have been generally accurate.

Evidently, reverse psychology is a little overrated, because according to the Florida Highway Patrol, this label did not cause troopers to simply smile and move on, confident that no one would be foolish enough to have in their possession a bag marked “BAG FULL OF DRUGS” that was, in fact, full of drugs. Instead, the troopers looked inside it. When it proved to be full of drugs, an arrest followed.

Although the tweet doesn’t tell us much about the incident, what we do know seems to raise some potentially quite stupid Fourth Amendment issues.

According to the tweet, the encounter began with “a traffic stop for unlawful speed.” If so, then the initial stop was legitimate, but in and of itself that wouldn’t be probable cause to search the car. It does give an officer the right to look inside, and if contraband is in plain view, that would be probable cause. Here we don’t know whether the bag full of drugs marked “BAG FULL OF DRUGS” was laying out in plain view, but it seems entirely possible.

But a bag marked “BAG FULL OF DRUGS” is not “contraband.” There’s no law against having such a bag. And I believe police can’t search a closed container inside a car just because there may be probable cause to search the car in general. (Or maybe I’m thinking of the trunk. Have I mentioned my disclaimer lately?) So the question would then be whether the label “BAG FULL OF DRUGS” would itself constitute probable cause to search inside the bag on the theory that a bag labeled that way might be full of drugs.

One could argue, and I am arguing, that the answer is no. An officer couldn’t search an unlabeled bag without some other grounds for probable cause, and surely a bag labeled “BAG FULL OF DRUGS” is less likely to be full of drugs than a bag that isn’t labeled at all. Right? It’s a novelty bag, not a drug bag.

Or you might call it an “ironic bag,” like at least one seller does. “There’s nothing more fun than walking around town with your ironic bag full of drugs,” reads the copy on lookhuman.com (see below), which may or may not be the site where this bag was purchased. “Perfect for getting a laugh or a stare out of passers by,” it continues, “and to take advantage [of] and poke fun at profilers looking to judge you for you[r] amazing swag.” Well, maybe. 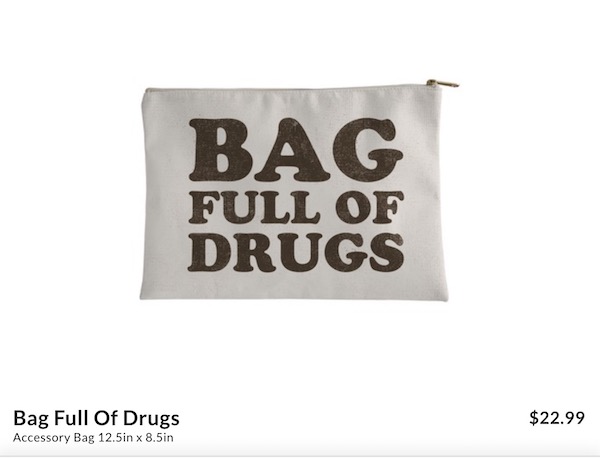 For only $22.99, it presumably doesn’t come prefilled with drugs. But then a reasonable drug consumer wouldn’t expect it to … I think.

On the other hand, one could also argue that an officer is entitled to take such a statement literally. If this were not the rule, such a person might argue, then crafty drug smugglers might evade detection, or at least conviction, by labeling all their drug bags “BAG FULL OF DRUGS.” There’s nothing more fun than driving across the border in a truck filled with bags marked “BAG FULL OF DRUGS”! Or maybe there is, because the more such bags one person has, the less ironic it seems to get.

This seems like a tough call, and I’m really not sure how to craft a Westlaw search to look for the answer. (Yes, I tried searching for “bag full of drugs,” but no luck.) It does seem somewhat similar, though, to the cases in which people get in trouble for claiming they have bombs even when it’s pretty clear that they are only joking, or frustrated, and almost certainly do not have a bomb. In those cases, the defendant doesn’t seem to do very well.

In one case I found, for example, a California man had painted some provocative messages on his 1970 VW van, such as “I am a … suicide bomber communist terrorist! Pull me over! Please, I dare ya!” and “W.O.M.D. [presumably, Weapons of Mass Destruction] on Board!” After an anonymous caller reported this, the officer who responded decided it was only “political satire” that didn’t require further action. But he called it in just to be sure, and his superior disagreed. The man was arrested, but ultimately not charged. He later filed a civil-rights suit, and lost. The case mostly has to do with the First Amendment, but in passing the court did suggest that phrases such as “I am a suicide bomber” would likely provide probable cause to search for a bomb. Again, that seems doubtful to me, but I wouldn’t suggest you try it.

The argument I made above strikes me as the kind of argument that is genius in theory, but doomed to fail in practice. Sort of the converse of an Alan Dershowitz argument, since those tend to be utterly stupid, yet somehow appallingly successful. You should probably shoot for something in the middle.

Attorney Who Bartered With Stripper Client is Suspended