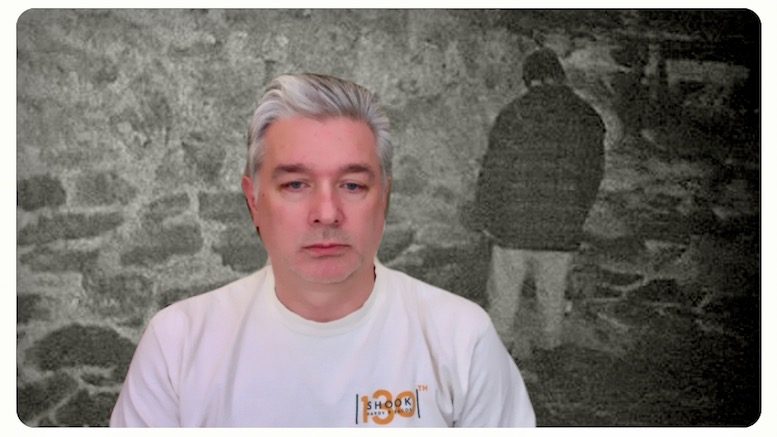 Thanks to whoever it was on Twitter that posted this background idea. Note that we are both wearing shirts.

As many sources have reported, a bar association in Florida has posted a message from Judge Dennis Bailey discussing the effects of the shutdown on Broward County courts, noting among other things that at least some divisions are now using Zoom to conduct hearings by videoconference, and offering some tips on how attorneys can do a better job of this.

Among those tips: Put on a shirt.

[T]he judges would appreciate it if the lawyers and their clients keep in mind these Zoom hearings are just that: hearings. They are not casual phone conversations. It is remarkable how many ATTORNEYS appear inappropriately on camera. We’ve seen many lawyers in casual shirts and blouses, with no concern for ill-grooming, in bedrooms with the master bed in the background, etc. One male lawyer appeared shirtless and one female attorney appeared still in bed, still under the covers. And putting on a beach cover-up won’t cover up [that] you’re poolside in a bathing suit. So, please, if you don’t mind, let’s treat court hearings as court hearings, whether Zooming or not.

I had some doubts as to whether this was a real message, partly due to my disbelief that an attorney would actually participate in a court conference without a shirt on, or while still in bed (possibly both?). Almost all the reports link only to the Westin Bar Association’s site, and while that is a real thing, having only a single source is not ideal. But Dennis Bailey is, in fact, a judge on the 17th Judicial Circuit Court, which covers Broward County, and he commented on the message yesterday to the Miami Herald. The Herald article notes that Bailey is on the board of the Weston Bar Association, which explains why it appeared there (it wasn’t on the court’s website).

Judge Bailey—who, the Herald claimed, “has to wear his robes during hearings,” though I don’t think that’s true—said he wrote the message mostly to update attorneys on the court’s status. But because the court’s own website already does that, it is hard for me to dismiss the idea that his real goal with this particular message was to express his profound amazement that attorneys would actually do this kind of thing. Still, he said the part about the dress code—and I guess “wear a shirt to court” qualifies as a “dress code,” at least in some jurisdictions–was just an “observation” that attorneys should dress in such a way as to show “recognition that this is a court hearing,” and that people should expect to get “the same amount of respect” that they show the court.

That probably does not bode well for the attorneys who couldn’t put on a shirt or get out of bed for a court call, but the reports don’t offer any details about those cases.

They Made Apollo 11 Go Through Customs