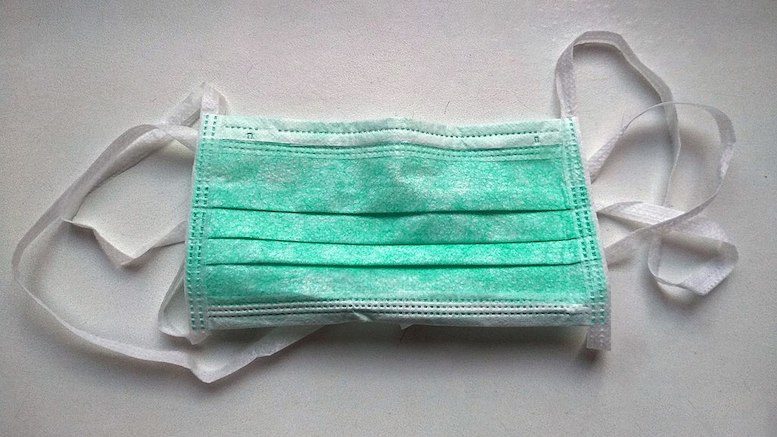 Wear it, or not, at your own risk (image: NurseTogether.com via Wikipedia CC 4.0)

As you know, authorities have been issuing orders requiring people to wear masks if they go out in public. For example, on April 15, New York’s governor issued Executive Order 202.17, which says that anyone over the age of two “shall be required to cover their nose and mouth with a mask or cloth face-covering when in a public place and unable to maintain, or when not maintaining, social distance.” Similarly, on Wednesday morning, San Francisco started enforcing its order generally requiring face coverings in public. Depending on the jurisdiction, failure to wear a mask in public may be a crime.

One potential problem: wearing a mask in public may also be a crime.

That is the case in New York, where one is guilty of “loitering” if he or she does the following:

Being masked or in any manner disguised by unusual or unnatural attire or facial alteration, loiters, remains or congregates in a public place with other persons so masked or disguised, or knowingly permits or aids persons so masked or disguised to congregate in a public place; except that such conduct is not unlawful when it occurs in connection with a masquerade party or like entertainment if, when such entertainment is held in a city which has promulgated regulations in connection with such affairs, permission is first obtained….

N.Y. Pen. Code § 240.35 (emphasis added). Note that a masquerade-party permit will resolve any concerns, though that may not help here.

In fact, many states and localities have similar anti-disguise laws, most of which date back to the Reconstruction era and were aimed at suppressing the Ku Klux Klan. See Wayne R. Allen, “Klan, Cloth, and Constitution: Anti-Mask Laws and the First Amendment,” 25 Ga. L. Rev. 819 (1991). New York’s law  goes back further, to “legislation enacted in 1845 to thwart armed insurrections by Hudson Valley tenant farmers….” Church of Am. Knights of the Ku Klux Klan v. Kerik, 356 F.3d 197, 203 (2d Cir. 2004). Desperate to avoid evictions during a depression, farmers put on masks and dressed up like Native Americans in order to fight back against the authorities. That also describes the Boston Tea Party, of course, but by 1845 this sort of thing was no longer cool. So the legislature passed a law declaring that anyone caught wearing a disguise in public “and not giving a good account of himself” would be “deemed a vagrant.” Id. at 204. This explains why it’s still part of the “loitering” statute, presumably.

So, is this constitutional? Well, it depends who you ask. In the Klan case, the district court held that section 240.35 was not constitutional, at least as applied. People could wear masks to a party but not to a Klan rally, so the law discriminated against a particular viewpoint. Disgusting as that viewpoint might be, it was still entitled to protection.

But the Second Circuit reversed. It held, among other things, that the masks themselves weren’t sending a message that the pointy hoods didn’t already send, which seems like a fair point. Prior cases had established a right to keep membership lists and so forth anonymous, but the court refused to hold that this meant there is a constitutional right to hide your identity while protesting. Ultimately, it held the police hadn’t discriminated against the Klan because there was no evidence that any other group had been allowed to protest while wearing masks. So, on its face (no pun intended), the law is constitutional.

In the unlikely event someone were to be prosecuted for wearing a surgical mask due to the pandemic, the First Amendment defense wouldn’t be available. A court would probably read an intent requirement into the law, maybe based on the legislative history, or on the word “unlawful” that appears later on. But taken literally, the law makes it illegal to wear a mask “in a public place with other persons so masked” … which is kind of the whole point of wearing one right now.

California’s law is more limited, because it applies only to something worn to conceal one’s identity for an improper purpose:

It shall be unlawful for any person to wear any mask, false whiskers, or any personal disguise (whether complete or partial) for the purpose of:

One—Evading or escaping discovery, recognition, or identification in the commission of any public offense.

Two—Concealment, flight, or escape, when charged with, arrested for, or convicted of, any public offense. Any person violating any of the provisions of this section shall be deemed guilty of a misdemeanor. 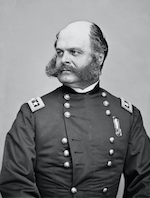 This is one of a surprising number of statutes that has been around, mostly unchanged, since California first codified its laws in 1872, which probably accounts for the inclusion of “false whiskers.” I like to imagine that at the time, people were disguising themselves as Ambrose Burnside to rob the stagecoach, sort of like how they wore presidential masks in Point Break more recently. Anyway, given that this law is limited to the wearing of masks, whiskers, or other personal disguises for purposes that are already illegal, it is less problematic than New York’s.

On the other hand, “public offense” is a pretty broad category, isn’t it? Things like loitering or “disorderly conduct” come to mind, so there is still a potential problem with selective enforcement. And as we have discussed before, anti-face-covering laws may have unintended consequences, or can even be a cover (no pun intended, again) for a form of discrimination. See “Anti-Mask Law Saddens Austrian Shark Mascot” (Oct. 12, 2017).

To me, this is an example (and there are many right now) of the extent to which the fairness of the legal system may turn less on the words we use in a law than on the discretion of those who have the power to enforce it. Considering who some of those people are right now, that is a reason for concern in times like these.

None of this should be taken to mean that I condone the wearing of false whiskers, of course. Anyone caught in false whiskers can go straight into the dungeon, as far as I’m concerned.