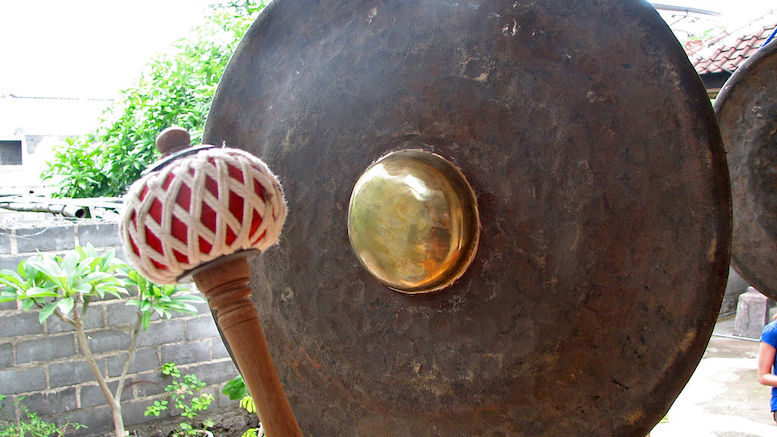 In what seems like a thoroughly reasonable opinion, the California Court of Appeal has upheld most of an injunction that barred striking employees from loudly banging on two big metal objects near the entrance to a hospital. These objects were not actually gongs in the traditional sense as pictured above, but everyone referred to them as “the gongs,” and they were, gong-like, intended to make noise, so that’s how I’m going to describe them.

Employees who are on strike are entitled to picket, of course, and that will often involve making noise that draws attention to the strike. (It may also involve deploying giant inflatable rats.) The right to do so is protected by the First Amendment, though this opinion only involves California labor laws. The problem here seems to have been the use of gongs to generate very loud, repetitive noises in the vicinity of hospital patients. Turns out that not even California labor laws are permissive enough to allow that without restriction.

According to the hospital, the noise level in the vicinity of the gongs (from 15–20 feet away) was between 80 and 106 decibels. The upper end of that range is close to the ear-bleeding noise levels created at some concerts. While patients were located further away and were of course indoors, they could still hear it (someone who lived half a mile away reported that it kept waking up his three-year-old), and the continual gonging was not helping patients get the rest they needed.

As someone who once contemplated murder because of the slow but constant banging away of a huge jackhammer not far from his apartment window, I can tell you that sometimes it isn’t the sheer volume of the sound but its repetition over long periods of time that tends to drive a person crazy. That was likely part of the problem here.

The strikers did not help their case by interfering to some extent with traffic near the hospital. They would push the crosswalk buttons and/or just hang around in the intersection, which at least slowed down people trying to get to the emergency room. Eventually the hospital filed a complaint seeking, among other things, an injunction to prevent the tactics it believed were illegal, including the generation of “abusive and raucous noise levels” right outside hospital buildings.

In February, the superior court agreed with the hospital and enjoined the picketers from interfering with traffic or creating “any excessive noise, including but [not] limited to the use of above-described ‘gongs'” that exceeded 50 decibels during the day or 40 at night. Actually, the limits were 45 and 35 respectively “if the noise is repetitive or impulsive (e.g. hammering or banging),” and that’s how gongs work so effectively these lower limits would have applied. These limits applied within 1,000 feet of the hospital.

On May 7, the Court of Appeal found that substantial evidence supported the finding that patients were being “greatly distressed” by the gonging and that this justified the injunction. It did find that the injunction was overbroad in a couple of ways and remanded so the superior court could limit it. Both sides claimed victory and did have at least some success on appeal, but the hospital came out ahead, it seems to me. It succeeded in limiting the noise, and it established an important legal precedent, as its lawyer pointed out.

“[T]he decision recognizes,” he said, “that being on strike does not give the union license to hit a big metal gong with metal hammers outside patient rooms.” Again, though, if they can do it in a way that generates less than 35 dB(A), they still have the right to do that. Unlikely as that may be.

Re: The Underpants Bomber