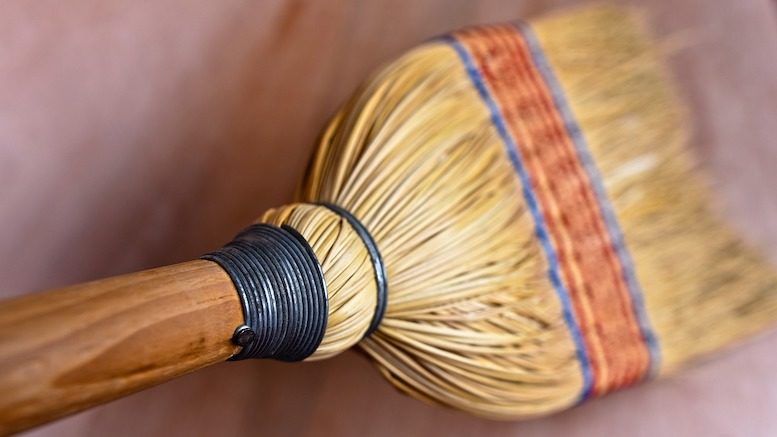 The type of broom involved is only one of many unanswered questions here (image: needpix.com)

The Lord works in mysterious ways. He afflicteth us with a leader who knoweth little and persistently tweeteth bizarre nonsense, yet He also provideth stories like this one.

It’s hard for me to explain this any other way.

On May 15 (but according to the BBC, just posted today), an Australian judge acquitted a man who had been charged as follows:

[The defendant on] 14 July 2019 in Goolgowi in the State of New South Wales did enter the dwelling house of [the alleged victim], situate at 8 Napier Street, Goolgowi, New South Wales with intent to commit a serious indictable offence therein, namely intimidation in circumstances of aggravation; namely he was armed with an offensive weapon, namely a machete, contrary to s 111(2) of the Crimes Act 1900”.

“The facts,” the court states in its opinion, “are not in dispute. What is to be inferred from those facts is in dispute.” As the court also noted, “[t]he facts of the case are unusual.”

That is true. Here they are. (Note: I have slightly changed some of the names to protect the parties involved, and also to more plainly distinguish one of them from myself.)

Kevin C wanted to be tied up with his underwear on. He wanted a broom handle to be rubbed around his underwear. He was willing to pay $5,000 if it was “really good”. Constable Spencer said he [Kevin C] had a history and proclivity for engaging the services of people. I infer … that this was not the first time Mr. C had engaged others for the realisation of his fantasies.

He made arrangements with a man called John on Facebook for people to engage in the role play. On Monday 8 July 2019 at about 10pm Kevin received a phone call from a male who said he would perform the role play. On Tuesday 9 July he contacted Kevin and told him he had enlisted two other males to assist. Kevin sent his address, which was 35 to 37 Napier Street, Goolgowi, to the male.

The event was apparently scheduled for July 14. At some point during the intervening five days, Kevin moved from “35 to 37” Napier Street to 8 Mallee Street. Kevin conscientiously informed the players of his new address. But they still got confused. They showed up at 8 Napier Street, the home of a Mr. M:

On Sunday 14 July, sometime after 6.15am when [Mr. M] went to the toilet and returned to bed, he saw some light coming from his lounge room. He assumed it was a friend who comes daily to make a coffee. He thought his friend was too early and called out, “Bugger off, it’s too early”. It was not his friend. He heard a voice say, “Is your name Kevin?” Mr M turned on his bedside light and took off his sleep apnoea mask. He saw two men standing next to his bed.

Both were holding machetes. This disconcerted him, and the following exchange took place (apart from the names, this again is straight from the opinion):

Mr M then engaged in conversation with the shorter guy.

Short guy, “Are you sure you are not Kevin as we were told to come to 8 Napier Street and pick up Kevin”.

Mr. M had lived at the house for 11 years. The men proceeded to leave. The shorter one apologised saying, “Sorry, mate” and shook Mr M’s hand. The taller one said, “Bye”.

About an hour later, apparently wondering where his new friends were, Kevin C called to check in. Learning of the error, he texted them the correct address. Three men arrived. One had a “great big knife,” which the opinion unfortunately does not compare to the one wielded by Crocodile Dundee, but it was probably pretty big. Mr. C objected to the knife and the man left it in the car. Then this happened:

Mr C and the three men went into his house. They had coffee. [This may be a euphemism, as no broom is ever mentioned.] The third man, who did not offer his name, requested bacon, eggs and noodles. Mr C began to cook for him. [The other two] left the house to go down the street. The third man fell asleep on the couch. About 45 minutes later [the other two] returned. Ten minutes later the police arrived….

Presumably these were the officers Mr. M had called, but the opinion doesn’t explain how they got this address. In any event, they arrested all three visitors, and a search of the vehicle found two machetes inside.

The court summarized the issues and its rulings this way:

The answer to the first question is yes.

The answer to the second question is no.

The court was satisfied that these were not two different groups of men who had coincidentally shown up at two different houses carrying machetes, and that seems pretty solid. The real question was whether the Crown could prove intent. It apparently did not dispute that there was “an agreement to perform services” and that the visit to Mr. M’s house was just a mistake. But it argued that, at one or both homes, the men had “gone beyond that agreement and engaged in acts of intimidation.” “The Crown asks rhetorically, why did they need to take knives if the agreement was to tie a man up in his underpants?”

But the defendant’s lawyer argued that the facts simply did not support the Crown’s interpretation. This was not a criminal act, he argued, “[i]t was a commercial agreement to tie up and stroke a semi-naked man in his underpants with a broom.” That’s all.

The court admitted to some “suspicion” about what had been going on, which seems entirely reasonable. But the burden is proof beyond a reasonable doubt, and it did not believe the Crown had met that burden. It was at least a reasonable possibility that the accused had been acting “pursuant to a lawful plan” to carry out a fantasy. As for the machetes, it found, they could have been “props”; the court noted that the fantasy “was unscripted and there was discretion as to how it would be carried out.” Maybe most importantly, the evidence showed that the men had acted “respectfully” at both addresses—once the initial home-invasion-with-machetes mistake was straightened out, at least.

The lesson is probably obvious, but I’ll go ahead and state it: if you’re going to arrange an unscripted fantasy involving a home invasion, make absolutely sure everybody has the right address.

Reminder: What Happens in Vegas May Not Stay in Vegas