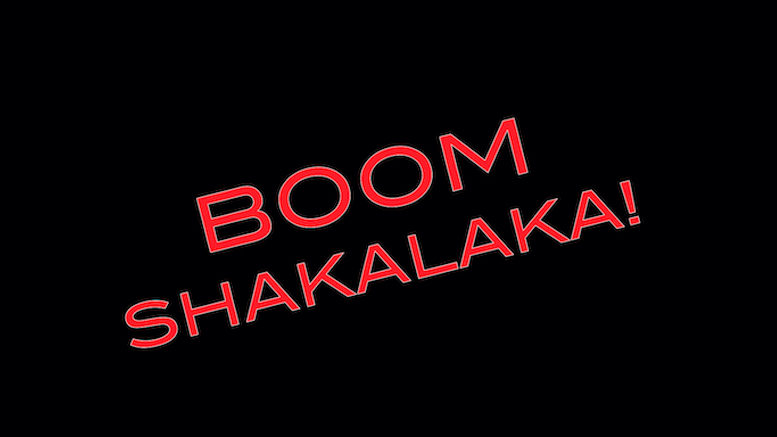 I’ll be honest: I didn’t know what “BOOM SHAKALAKA” meant, exactly, before researching it for this article, not that an exact definition is really necessary. Whatever else it might mean, it is not a legal term of art that’s likely to be part of an appropriate response to a complaint filed against you by the bar association.

That’s where this article is going to end up, I can just tell you that right now.

The top definition for this term on Urban Dictionary is “the sound that is heard when someone makes an awesome slam dunk.” That appears be true primarily because of its use in the extremely popular arcade game NBA Jam, which made its debut about 25 years ago. (I’m a football fan and played NFL Blitz instead, which explains why I’m not that familiar with this.) Announcers for the real sport also started using it, and from there it made its way into music.

Although, as it turns out, that’s where it may have started in the first place. Here’s a clip from a really entertaining interview with Tim Kitzrow, who did the voices for NBA Jam, in which he discusses how the term got into the game:

As Kitzrow says, “boom shakalaka” was used in the chorus of a song by Sly & the Family Stone—well, “boom shaka laka laka,” which is close enough—and so that may be where it originated. But it’s become at least as well known because of its use in NBA Jam. There, as other Urban Dictionary definitions say, it’s an “onomatopoetic ‘in your face,'” used as an “exclamation of joy and triumph in one’s own accomplishments,” or “to rub your achievements in an opponent or challenger’s face to let them know you are are in control and they cannot stop you.”

All of which seems to make it inappropriate, in most cases, to use “BOOM SHAKALAKA” in responding to a petition asking that you be held in contempt. But that’s what happened in this recent Massachusetts case. The lawyer in question had been accused of professonal misconduct, and was temporarily suspended after he failed to respond to bar counsel’s requests for information. About two months later, bar counsel sought a contempt order, saying that the lawyer was still practicing in violation of the order suspending him. After he was found in contempt, he appealed to the Supreme Judicial Court of Massachusetts.

He does not seem to have challenged the contempt order itself, but rather argued that he should not have been suspended in the first place because he had in fact complied with the requests for information. As he put it, he “DID COMPLY, and DID PROVIDE AN ANSWER, and my answer was provided in a form of SILENCE. (BOOM SHAKALAKA.)” He seems to have contended that he had a Fifth Amendment right not to incriminate himself, and therefore his refusal to answer had to be accepted as a valid answer, a conclusion he followed with “BOOM SHAKALAKA,” presumably indicating a feeling of joy and triumph in this logical accomplishment and a wish to rub it in bar counsel’s face to let her know he was in control and she could not stop him.

The Supreme Judicial Court did not see it that way.

The all-too-brief order explains that silence was not an option here, because of the “required records” exception to the Fifth Amendment privilege. He had to at least turn over his client files, which he apparently refused to do, if he had even preserved them as the law requires. The court found no error in suspending him, therefore, and he had not challenged the contempt order imposed for ignoring the suspension. It affirmed both orders.

This would probably justify bar counsel in uttering at least an informal “boom shakalaka,” though I would still not advise including that (or any similar declaration of presumed success) in a legal document. You just never know.

Lawyer’s Briefs Save His Life

Fraternity Members Sue After Being Depicted as Drunken Sexist Morons