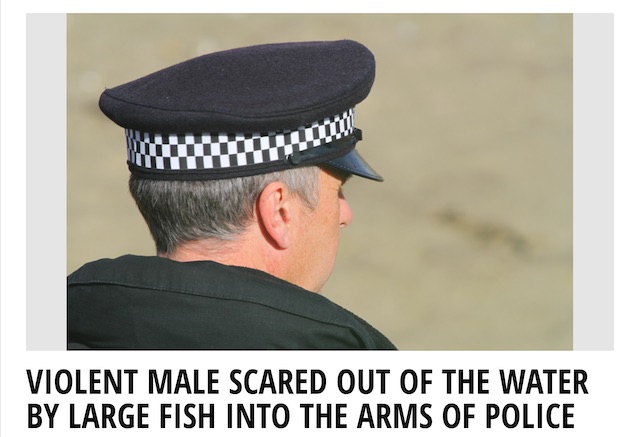 Just one of many reasons this always fails (image & headline: the Island Echo, www.islandecho.com.uk)

We’re not succeeding, but we’re still doing them.

For example, here’s one that took place at Thorness on the Isle of Wight on June 26. Police said an armed 31-year-old man suspected of burglary and trying to steal a car reportedly “entered the sea in an effort to evade arrest.” (Technically, he had entered the Solent, the strait between the Isle of Wight and the mainland, but it’s all connected, so whatever.) As always, the thought process of one who enters a body of water for this purpose is unclear. Police can move along the shore much faster than one can swim, and the Solent is almost three miles wide at that point, so escaping across it to the mainland was very unlikely as well. (Plus, the police can just call ahead.) But in this case, nature intervened, according to the Island Echo: “A large fish going about its daily business startled the wanted individual, who soon left the water of his own accord and into the arms of the waiting officers.” Sadly, no other details of the fish or its business were forthcoming.

Did this man have a reason to be frightened? Well, he was in the ocean. (Yes, technically the Solent, but whatever.) Have you seen some of the things that live there? Like sharks. Shark attacks are extremely rare, but that doesn’t mean you should encourage the bastards by actually getting in the water with them. See “Shark-Attack Lawsuit Raises Interesting Questions, Like What Were You Doing in the Ocean to Begin With” (Aug. 10, 2016). You’re not going to escape this way anyhow, so you might as well try to avoid being eaten. See “Bad Places to Hide: Atlantic Ocean” (Sept. 5, 2017); see also “Bad Places to Hide: Island in Alligator-Infested Lake” (Mar. 30, 2016).

Are there sharks in the water near the Isle of Wight? Well, according to the Global Shark Attack File, there’ve been sharks there at least twice: once on June 21, 1856, and another on September 3, 1925. And those are just the ones we know about. I don’t know what kind of “large fish” this was, but I do know that if a fish of any size brushes against me while I’m in the ocean, I will be out of the ocean within milliseconds.

This one involved a kayak, and possibly even a temporary success, although in this context a temporary success is, of course, a failure. The Kitsap Sun reported on June 1 that a 30-year-old man “evaded a police search” by kayak after he burglarized a home on Bainbridge Island. The sequence of events isn’t very clear from the report, unfortunately. The man seems to have used a kayak to leave the scene of the crime, carrying away his booty, namely three valuable stringed instruments, some silverware, and a rain jacket. (I’m not sure how you fit even one stringed instrument into a kayak, much less three, but that’s what it says.) It’s not clear where he went, but he seems to have come ashore at some point. The report then says, “Aware that police were looking for him, [the man] stole a kayak and paddled out to the Indianola area, where Kitsap County Sheriff’s deputies were called about a male in his underwear.” What happened to the first kayak? Where are the stringed instruments? Why no pants? So many unanswered questions.

The man later told a detective “he had been using drugs and was looking for something to eat and drink,” although what he ended up with was three valuable stringed instruments, some silverware, and a rain jacket. And two kayaks, of course. At least temporarily.

This last one wasn’t an attempt to escape per se, but rather to smuggle two bundles of pot from Canada to Detroit via the Detroit River. (I was not aware it’s still necessary to smuggle pot into the United States, much less into Detroit, but I guess somebody’s still bothering people about it?) But I still think we can squeeze it into this category, because he was trying to evade authorities, he was doing it by water, and he failed miserably. It’s not clear why he failed, but according to the report, “federal agents found him floating unconscious in the Detroit River while hauling 265 pounds of marijuana,” and that, my friends, counts as a failure.

This incident is unusual not because he failed but because he was using a submarine. Well, initial reports claimed he had used a “submarine,” but I think that was only so they could say that the feds had “torpedoed” his attempt, because for some reason they insist on saying things like that. In fact he used a Seabob-Jet, an “egg-shaped” underwater “electric scooter” with a top speed of about 13 miles per hour. (“It’s like a bullet you hold on to,” said a dealer quoted in the report, which would be true if bullets went 13 miles per hour and you could hold onto one.) The man was towing the two bundles behind the scooter, which probably made it handle poorly and might have contributed to the failure. To the best of my knowledge, there are no sharks in the Detroit River, but he could have been attacked by a sturgeon or something.

He probably would have failed even on dry land, because the feds were apparently on to him. He had been arrested in May and was found to be transporting a large plastic bag containing over $97,000 in U.S. currency. It is not illegal to carry around a lot of cash (though police will often take it anyway, just in case you’re up to something), so my guess is that they let him go but kept him under surveillance to see what happened. Since what happened was that he ended up unconscious in the Detroit River, he’s probably lucky they were watching.

The man reportedly later admitted that he “directs a smuggling organization that moves money and narcotics” between the U.S. and Canada, or that tries to, anyway.