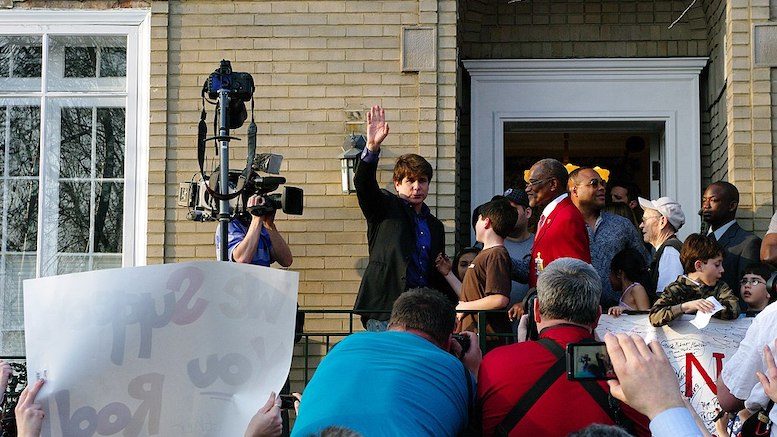 Just a quick note to let you know that former governor and recently un-incarcerated felon Rod Blagojevich will be headlining a fundraiser on August 27 for Tom McCullagh, who’s running for the Illinois Senate. I wanted you to be able to clear your calendar in advance.

As you may recall from my fairly extensive Blagojevich coverage, though this most recent post is probably a sufficient review, Blagojevich is a crook. He was also once the Democratic governor of Illinois, but was impeached due to shenanigans, including his attempt to sell an appointment to the U.S. Senate seat left open when Barack Obama became president. (This was during a period of American history in which shenanigans were still seen as grounds for impeachment.) Though he can never run for elected office again in Illinois, in 2011 a smaller group of citizens did vote to have him serve a 14-year-term in federal prison. But President Trump righted that ghastly wrong in 2018 by commuting Blagojevich’s sentence. Blago is therefore free to do stuff like this:

As you can see, Blagojevich is now either a wholehearted Trump supporter due (presumably) to the commutation, or is being paid to pretend that he is. Both explanations are plausible. There is of course nothing all that unusual about fundraisers like this one in general—both sides have them all the time—although my guess is that it’s rare for the headliner to be a convicted felon. This particular fundraiser is apparently limited to 50 in-person guests at $150 a plate, with a presumably smaller “VIP” cocktail reception for those willing to pay $300. The event will feature an “intimate address” by Blago, available only to the lucky few who manage to grab one of the 50 tickets, or anybody who wants to watch it on the internet for free.

I infer the latter from the note saying the event will be “live streamed to over 1.67 million subscribers,” a number that matches the alleged number of subscribers to Next News Network’s YouTube channel. The event is hosted by Gary & Angie Franchi of said network, who have also listed themselves as “guest speakers” at this event they are hosting. What is the Next News Network? Well, as you can see if you visit its YouTube channel, it’s an excellent source for images of Hillary Clinton with fake demon eyes. There might also be some news mixed into some of its videos, as explained in this November 2016 report on Russian internet propaganda:

A former contractor for … the Next News Network said he was instructed by the site’s founder, Gary S. Franchi Jr., to weave together reports from traditional sources such as the Associated Press and the Los Angeles Times with ones from RT, Sputnik and others that provided articles that often spread explosively online.

“The readers are more likely to share the fake stories, and they’re more profitable,” said Dyan Bermeo, who said he helped assemble scripts and book guests for Next News Network before leaving because of a pay dispute and concerns that “fake news” was crowding out real news….

Franchi said in an e-mail statement that Next News Network seeks “a global perspective” while providing commentary aimed at U.S. audiences, especially with regard to Russian military activity.

The topic of Blagojevich’s intimate address has not been announced, but may involve his plans for reforming our corrupt criminal-justice system, the cause he announced after being released. Or maybe it will involve plans for reforming the disciplinary system that regulates lawyers in Illinois, given that the Illinois Supreme Court, which did this in May:

Or maybe it will present a global perspective on Russian military activity. We’ll know in just 10 days.

Actually, We Were Wondering How You Signed the Claim Forms

Man Who Expected to Die, But Didn’t, Threatens To Sue Over Wrong Diagnosis

Update: The Paddlefish Defendants Are Now for Sale