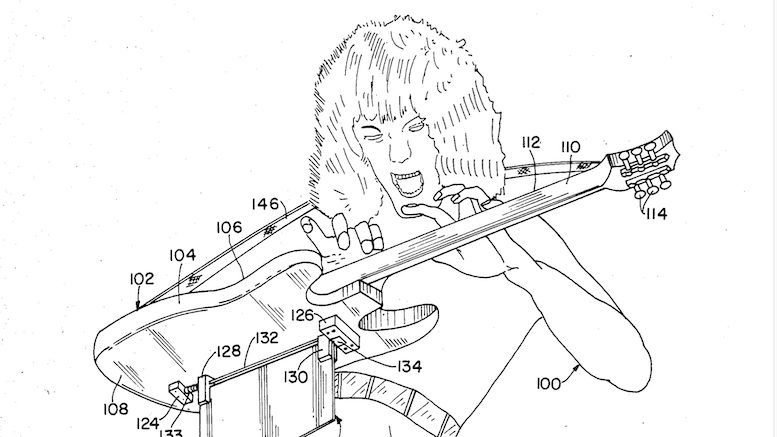 Here’s another reminder that Edward L. Van Halen, who died today at the age of 65, was an inventor as well as one of the best guitar players in rock history. As I mentioned a while back, in 1985 he applied for a patent on an invention described in the “abstract” section as follows:

The description section, which is arguably even duller than the abstract, explains the function thusly:

Referring now to the drawings, wherein like reference numerals represent like elements, there is shown in FIG. 1 a musician 100 playing a guitar 102…. The guitar 102 with the supporting device 120 being arranged in its inoperative position may be played in a conventional manner, that is, with the guitar being arranged in a substantially vertical orientation…. When it is desired to activate the supporting device 120, the musician 100 merely picks up the guitar 102 and rotates the body 104 into a substantially horizontal position.

The patent office granted the application in 1987. Since then, it’s been cited as prior art in 16 other applications (14 in the U.S. and two in the U.K.), and having reviewed them all I can tell you that none of those even approach one percent of the awesomeness of No. 4,656,917.

In a less-than-comprehensive search I wasn’t able to find an image or video of Eddie actually using this invention. [But see below.] I think I remember seeing one, although I think I remember seeing a lot of things in the 1980s that may or may not have actually existed. It could be that Eddie himself didn’t use it because Eddie himself didn’t need it. The video below is from a show in August 1986, after the application was filed, so he presumably had a functioning version of the apparatus at the time. But if so, he doesn’t use it here. So maybe it was intended only for lesser mortals.

Here’s a sample of what musician 100 could do with guitar 102 even without supporting device 120. R.I.P., Eddie Van Halen.

UPDATE: The team at Imgur noticed my inability to find any evidence of Eddie actually using his invention, and were kind enough to help me out. In fact, they managed to dig up three pictures of him using it, including one that looks like a prototype—or at least it’s made out of wood (the others look a little more advanced). You may also enjoy his tiger-stripe outfit, which I have no reason to think he designed but is pretty awesome. See below, and thanks, Imgur, for the help.