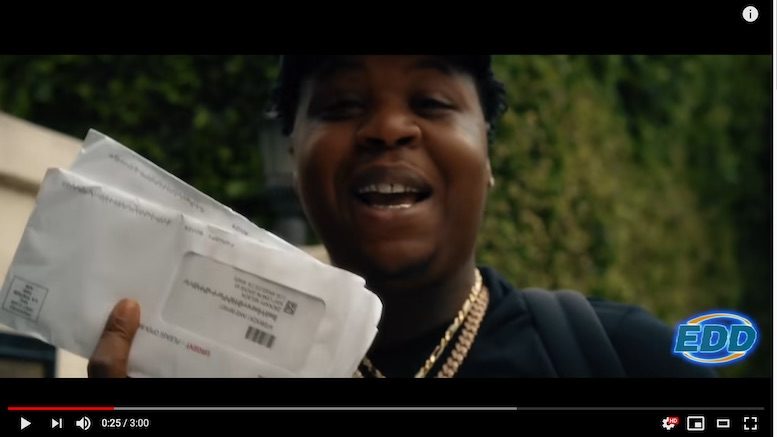 Before the rise of social media, I think it was relatively rare for people to voluntarily incriminate themselves to a mass audience. It did happen, of course. See, e.g., “Man Arrested After Bragging About Unsolved Robbery on Talk-Radio Show” (Feb. 25, 2005). But in general, people seemed to understand that you should not make confessions or disclose potentially incriminating evidence on the radio or to a TV camera.

There seems to be something about social media, though, that interferes with this understanding. See, e.g., “Note: Add ‘Judge’s Nameplate’ to List of Things Not to Steal” (Mar. 9, 2012); “Facebook: Bad News for Bigamists” (Mar. 29, 2011). People may assume that the distribution of the incriminating facts will be limited to their own social network, but that is a very unwise assumption.

YouTube is somewhere between social media and mass media, so maybe that helps explain why someone would distribute a music video in which he raps about how he got rich by filing fake unemployment applications, given that (according to the Justice Department) this was not a fictional story.

In the song, called “EDD,” a reference to California’s Employment Development Department, Fontrell Baines (a.k.a. “Nuke Bizzle”) and another man (a.k.a. “Fat Wizza”) rap about how much money they made from defrauding the agency. For example, early in the video Bizzle is seen happily taking several EDD-labeled envelopes out of a mailbox (see above) while saying “I just been swipin’ for EDD / Go to the bank with a stack o’ these.”

What Bizzle was allegedly swipin’ were pre-loaded EDD debit cards, obtained by filing fake applications using other names. According to DOJ, Bizzle and others got at least 92 cards loaded with more than $1.2 million this way, and had accessed and/or spent upwards of $700,000 by the time of Bizzle’s arrest.

In his part of the video, Fat Wizza remarks that this is a better arrangement than dealing drugs (“You gotta sell cocaine / But I can just file a claim”). It’s more convenient, at least. Everybody in the video has a laptop, which I am guessing refers to the ability to file claims online. In the video, the laptops are generally covered in $100 bills, as one would expect.

Of course, rappers and other artists, but especially rappers, often create works in which they and/or others discuss the commission of crimes or are shown committing crimes. As long as the crimes are fictional, this is not a problem, and it’s protected by the First Amendment, in fact. So the EDD video is not “incriminating” in that sense. (This is why, for example, Keanu Reeves has never even been questioned by police in connection with any of the 299 murders he is shown committing in the John Wick movies.) But it may have been incriminating in the sense of causing someone in a position of authority to wonder whether these lyrics might have been based in fact, leading to an investigation that uncovered actual evidence. (Bizzle had nine EDD debit cards on him when he was arrested, according to the report.) It therefore remains very unwise to have made it.

The video does have a disclaimer stating that “THIS VIDEO WAS CREATED WITH PROPS AND WAS MADE FOR ENTERTAINMENT PURPOSES,” but evidently law enforcement did not consider that a binding injunction, even though it was in all capital letters. And besides, as you can see above, at least some of those props were awfully realistic.

President Wins 2009 Nobel Prize for Not Being George W. Bush