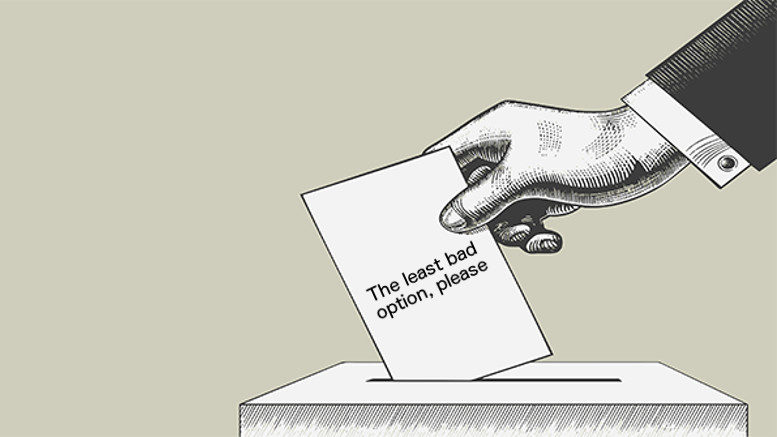 The leader in question here, of course, is Chris “Pineapple” Hooper of Rockhampton, Queensland, Australia. Although Mr. Hooper—who The Guardian described as “a climate change activist who rides around town barefoot on a collection of vintage pushbikes”—appears to be the rightful mayor of Rockhampton, Queensland’s legislature has threatened to change the law retroactively to keep him from assuming the position. These sorts of shenanigans have the potential to undermine democracy, and are concerning even though this particular position doesn’t (to my knowledge) involve access to nuclear weapons or stuff like that.

I should mention that Hooper—who The Guardian also described as “a local climate and peace activist who sleeps in a CBD storefront that doubles as a ‘way out there’ drop-in centre for artists”—was not actually elected to this office. He was the runner-up in Rockhampton’s mayoral election in March, winning 31% of the vote in a contest against Margaret Strelow, who has been mayor for 16 of the last 20 years. But Strelow resigned a couple of weeks ago after a tribunal found she had engaged in misconduct by failing to properly declare “hospitality” she received from a large mining corporation. The tribunal recommended a public apology, but Strelow instead resigned in protest.

As she knew when she did this, Queensland law provides that if a mayor’s office becomes vacant during the early part of the term, the local government must fill that office (it can’t wait until the next election), and it must do so by contacting the runner-up in the previous election and offering that person the office. If he or she accepts, “the local government must fill the vacant office by appointing the runner-up.” This means that Hooper—who The Guardian also described as “a former coal train driver and a self-funded retiree” who “doesn’t wear shoes”—has the legal right to become the next mayor of Rockhampton.

We know Strelow understood what the consequences would be, because in mid-October, while the tribunal’s investigation was going on, she posted a video on her Facebook page in which she wore a suit made of bubble wrap (over her regular clothes) and explained that she was trying to “stay safe”:

For the next six months – if anything happens to me then the State Government have passed Legislation to say that Chris Hooper is automatically your Mayor. He will be Mayor for the remaining 3 (+) years of the term. It doesn’t pass to the Deputy Mayor. It goes to the ‘next in line..’ that is to the person who came second at the election for Mayor.

This was presumably intended to gain public support during the investigation by reminding people that if the bubble wrap proved ineffective and she was forced out, the alternative would be a formerly-coal-train-driving barefoot climate activist. It did not, however, affect the outcome of the investigation, or at least not to Strelow’s liking, and she therefore resigned, effectively passing the office to Hooper.

The ruling Labor party was not keen on that result, however. On the day Strelow resigned, a Labor MP showed up at the CBD shop to ask Hooper not to take the job. Because there were no other candidates, if he were to decline then the office would be filled by a special election. But Hooper did not decline. In response, the Queensland local government minister announced that the government intended to “retrospectively change the rules” to allow an immediate by-election, in order to “ensure communities can have a proper vote to determine who represents them.”

But there was nothing “improper” about the vote in this case. It’s just that the person who won decided to resign, and what happened next was controlled by the law in place at the time. And for whatever reason, Queensland has a law providing that, in certain circumstances, an elected office may be filled by someone who didn’t get a majority of the popular vote. That of course is a ridiculous law that no modern, functional democracy would ever … you know what, never mind about that. Forget I said anything. The point here is that for better or worse, that was the law at the time and it has to be applied as it existed then.

The Electoral Commission of Queensland agrees with me, in fact, or at least it would agree if it had any idea I existed and had an opinion on this matter. A few days ago, it ruled that the current law had to be applied, and that no “retrospective” changes could be made until January at the earliest, when the new parliament is seated and new legislation can be passed. And under current law, the vacant position has to be filled now, and it must be offered to Pineapple Hooper, who has said he intends to take it.

That might require a few adjustments during the interim, as Pineapple admitted to The Guardian. “I was saying today I might have to buy a new pair of thongs [to go into the council chambers],” Pineapple explained. “I don’t want to dress up in [fancy] clothes. People judge me because I’ve got no shoes on.” Maybe he should move to the U.S., where the emperor doesn’t seem to need any clothes at all.

Update: Sources reported this week that the state electoral commission had formally offered Pineapple the mayor’s job, and that he had accepted. There was still some uncertainty as to whether council approval was needed, apparently, or at least someone is taking that position. “So there are still a few games happening,” Pineapple said.