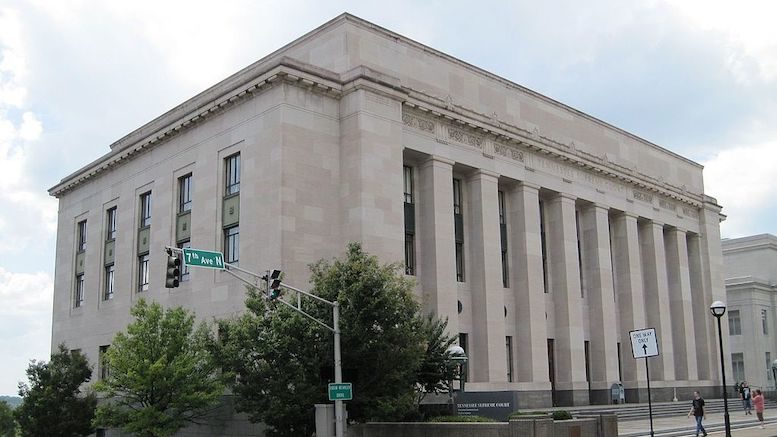 The Nashville Tennessean, whose reporters work a lot harder than whoever came up with its name, reports that the Tennessee Supreme Court suspended the license of an attorney who gave questionable advice in a Facebook post. The court questioned the advice because it involved “instructions on how to commit murder and stage a concocted defense.”

Turns out this is against the rules.

According to the court’s opinion (opinions page, PDF link), the matter is “a cautionary tale on the ethical problems that can befall lawyers on social media,” but in particular those who give what could be interpreted as instructions on how to commit murder and stage a concocted defense. Winston B. Sitton maintained a Facebook page that identified him as a lawyer, though it does not seem to have been an “official” law-firm-office page. (If this is that page, it does say he is currently the “Senior Managing Partner at Sitton & Associates,” which might pose other issues for reasons discussed below.)

In December 2017, one of his Facebook friends posted about a “tumultuous break-up” she was going through, and Sitton thus “became aware of” allegations of abuse, harassment, and requests for protective orders. The friend then posted, “I need to always carry my gun with me now, don’t I? Is it legal to carry in TN in your car without paying the damn state?”

This was not addressed directly to Sitton, but he chose to respond. And while a simple statement of Tennessee law on gun-licensing requirements would have been okay, or better yet, a link to information instead of legal advice, he chose to go beyond that. He started with this:

I have a carry permit, [Facebook Friend]. The problem is that if you pull your gun, you must use it. I am afraid that, with your volatile relationship with your baby’s daddy, you will kill your ex — your son’s father. Better to get a taser or a canister of tear gas. Effective but not deadly. If you get a shot gun, fill the first couple rounds with rock salt, the second couple with bird shot, then load for bear.

This is still probably okay, apart from the suggestion that “if you pull your gun, you must use it,” which I’m pretty sure is not actually required by law. But the problems really started with the next paragraph:

If you want to kill him, then lure him into your house and claim he broke in with intent to do you bodily harm and that you feared for your life. Even with the new stand your ground law, the castle doctrine is a far safer basis for use of deadly force.

Emphases added. Now, I know that, like me, you are outraged by Sitton’s shocking failure to hyphenate “stand-your-ground law,” which is why I added the emphasis. Because I don’t want that to overshadow the more problematic words in this paragraph, namely “[i]f you want to kill him, then….” Because if those words are not followed by something like “don’t” or “you should not” or (more to the point) “I cannot advise you further,” that could end up being a problem. And as you can see, Sitton did not use such words.

The Facebook friend responded to this, saying “I wish he would try.” This does start with “I wish,” but it could still tend to undermine a “castle doctrine” defense if the person in question ends up dead. So it wasn’t a great idea for her to say this. But it was a far worse idea for Sitton to respond again, advising her to destroy that evidence:

As a lawyer, I advise you to keep mum about this if you are remotely serious. Delete this thread and keep quiet. Your defense is that you are afraid for your life — revenge or premeditation of any sort will be used against you at trial.

Yes, “keep mum about this,” he posted on Facebook, on a page that he did not control and which could be viewed by, at a minimum, any of his friend’s followers, and possibly any followers of their followers, if not all of Facebook’s more than two billion users worldwide. Be sure to keep this on the down low, my friend. Mum, as they say, is the word.

She did take his advice and delete the thread, which also deleted all the comments. But in the interim, someone else posted (referring to the ex), “He’s likely already seen th[is] thread!” And indeed he had. Not long after that, the district attorney general had seen it, and eventually, so did the Board of Professional Responsibility.

After investigating, the Board filed a petition alleging that Sitton violated Rule 8.4(a)–(d) (part of Tennessee Supreme Court Rule 8). He argued that his comments were “taken out of context” and that he had not actually been counseling the woman on how to get away with murder. He filed a motion to exclude the Facebook posts from evidence, for a reason the opinion doesn’t give but was almost certainly wrong, and he waived the argument at the hearing anyway. (He also argued that Rule 8.4 is unconstitutional, which it isn’t.) The hearing panel found he had violated Rule 8.4(d), which prohibits “conduct prejudicial to the administration of justice,” and 8.4(a), which declares that it is professional misconduct to violate the Rules of Professional Conduct (I hope that one doesn’t surprise you). It recommended suspending Sitton’s license for 60 days.

The Tennessee Supreme Court agreed Sitton had violated the rules, but disagreed with the penalty—which it multiplied by 24.

Sitton argued, in part, that he did not mean his words to be taken literally, but rather the opposite: they were “hyperbolic, dark sarcasm” meant to “shock [her] out of the delusion” that the discussion they were having was acceptable. The hearing panel’s interpretation, he said, was “wild speculative theory.” He also deployed the high-risk, high-but-unlikely-reward argument that he could not possibly have been stupid enough to actually give such legal advice on Facebook:

[T]he Panel’s speculative theory [he argued] cannot . . . be reconciled with the fact that the correspondence was in public — in plain view. There is no conceivable reason that Petitioner, a lawyer with nearly 30-years [sic] of experience in New York and Tennessee, would have been stupid enough to publish such words openly in public view had there been any sinister intent or were this instruction to be taken literally.

The logic makes some sense, I suppose, but this is a hard argument to win if there is evidence from which a court could conclude that you were, in fact, stupid enough to do just that:

We agree with Mr. Sitton that it is hard to conceive of any reason why a lawyer, any lawyer, would offer instructions on how to commit murder and stage a concocted defense. But we disagree with Mr. Sitton that his publication of the advice on a public platform such as Facebook cuts in favor of his position. To the contrary, … Mr. Sitton’s decision to publish these comments on a public forum made his situation exponentially worse.

Just to make the holding clear: the court agreed with the hearing panel that “[g]iving advice as a lawyer about planning in advance how to claim a defense to killing someone is conduct that is prejudicial to the administration of justice in violation of Rule 8.4(d).” Don’t do that.

The court conceded that his conduct did not exactly fit what is usually considered “conduct prejudicial to the administration of justice.” He was not actually advising a client in an existing legal proceeding, for example. But he was giving a specific person “instructions on how to kill” another specific person “and manufacture a claim of self-defense,” including concealing evidence (including the advice he had given her on how to do this). This was over the line:

Lawyers may of course offer advice on the legal consequences of a proposed course of conduct and may offer counsel on the meaning or application of the law. See Tenn. Sup. Ct. R. 8, RPC 1.2(d). That is not what Mr. Sitton did here. In his capacity as a lawyer, Mr. Sitton offered specific legal advice on how to orchestrate a killing in a way calculated to provide the perpetrator a fabricated defense to criminal charges. Then, in an ultimately unsuccessful effort to conceal the conversation, he directed Ms. Houston to delete the comment thread. Our rules do not permit lawyers to offer advice on how to commit crime with impunity.

The rules also, it should be said, frown on lawyers who do things that make lawyers or the legal system in general look bad, which is part of what “prejudicial to the administration of justice” means in the ethics context. Doing it on social media can amplify that problem, as the court found here. “Lawyers who choose to post on social media must realize they are handling live ammunition,” the court pointed out. Sitton didn’t seem to realize that, and ended up shooting himself in both feet. The court suspended him for four years.

Not to pile on, but the opinion also says Sitton was “administratively suspended” in 2018 for failure to pay Tennessee’s “professional privilege tax,” and “has not sought reinstatement.” This might make it a problem that his Facebook page—which is still up—says he’s been the “Senior Managing Partner at Sitton & Associates” since 2001 and doesn’t mention either suspension. To be fair, he does mention both of them on a separate “Sitton & Associates” page, where he also “adamantly contest[s]” the Tennessee Supreme Court’s finding. (He also says he failed to pay the tax as a protest and that the hearing panel was biased.) That page also says Sitton is licensed in New York and Maryland as well as Tennessee, so that might make it okay for him to hold himself out as a currently practicing lawyer, as long as he doesn’t practice in Tennessee for now.

I’m going to assume he actually has “associates,” though none are pictured on the Facebook page. He’s in enough trouble already.

Tax Tip: Income Earned In Antarctica May Not Be Deductible