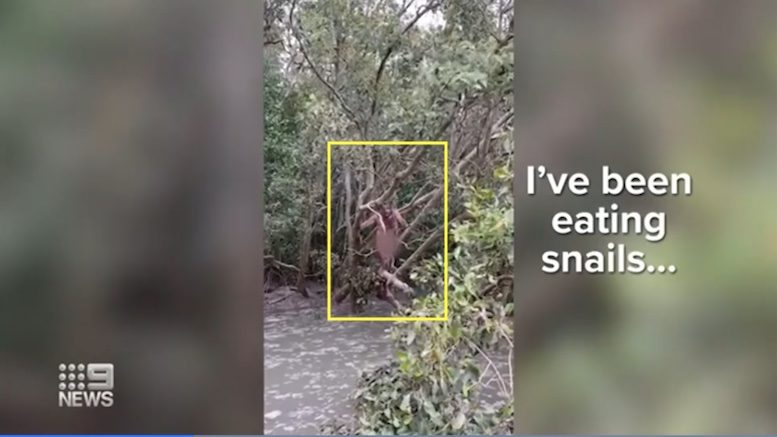 He's lucky that's all that got eaten (image: still from 9News video)

By the time you see this, Donald Trump will no longer be president. Of course, if he launched a nuclear attack on (let’s say) China between the time I went to sleep and 11:59:59 ET on Wednesday, you won’t be seeing this at all, or anything else, for that matter. Because this next thing has been true for the past four years: the people of the United States literally gave the power to end human civilization, if not all life on the planet, to Donald Trump.

If, however, the world has not ended despite our best efforts, then by the time you see this, Donald Trump will no longer be president, and so it will blessedly be time for things to start getting back to normal. Not good, any time soon, but normal. That is true here at Lowering the Bar just like everywhere else. And that of course means it’s time, yet again, to remind people that trying to escape by water is almost certainly doomed to failure.

I might need to start a separate website for this, because examples keep coming in, and the pace might even be increasing. Hopefully, this is due to increased observation, not an increase in aquatic escape attempts themselves. If so, that would suggest the word is starting to get out that this doesn’t work.

But if that is true, it hasn’t reached northern Australia yet.

Specifically, it hasn’t reached Darwin, the capital of the Northern Territory and almost as far north as it’s possible to get in Australia. It’s a coastal city 400 miles southeast of Timor, 600 miles southwest of New Guinea, and about 2,000 miles northwest of Sydney. If you’re still having trouble placing it, it’s about 24 miles northwest of Humpty Doo, if that helps.

It should, because we discussed the township of Humpty Doo at some length back in 2016. That started out as a report on a guy who called the cops after his dad set fire to his (illegal) cannabis farm, but turned into a ridiculous exploration of how Humpty Doo got its name. Darwin was mentioned, but only because of its location. Anyway, feel free to go read that post if you have some time on your hands, like maybe if the movers didn’t show up at your new place and you don’t have anything to do in the meantime because you can’t launch a nuclear attack anymore. Otherwise, let’s go on.

According to the report—and I received many such reports, but I highly recommend this Australian example—on January 3, two mates in a tinny saw a man in a tree who they thought was taking the piss. Sorry, I should have said I highly recommend this example if you speak Australian. “Mates” are friends, of course; a “tinny” is a small fishing boat, often silver or “tin” in color; and “taking the piss” is Commonwealth slang for “playing a joke.” But as their tinny approached the mangrove tree in which the man was perched, they quickly realized he was not taking the piss, or that if he was, it was a very elaborate piss indeed:

“We heard this faint [cry] like ‘ahhh, ahhhh’ — (I said) to me mate ‘is that guy saying help?’ so we got a bit closer and said ‘I can see you’,” [one of the mates] told 9News. To their surprise, when the pair got closer, what they found was a naked man clinging to branches, filthy and covered in bug bites…. “We thought he was having us on, taking the piss, and then we went closer and realised the severity,” [the mate] said. “Completely naked, cuts all over him, swollen feet, covered in mud.”

It would also have been very unwise to choose such a place for a joke. On the bright side, this is summer there—the overnight low in Darwin on January 3 was 84 degrees—so one could be naked and still be quite comfortable. On the less-bright side, the area is subject to tropical cyclones, monsoon rains, and frequent lightning strikes. According to Wikipedia, in January 2002 an early-morning squall produced over 5,000 strikes within a 60-kilometer radius of Darwin, for example. And if you are willing to take the risk of being naked in a tree over a swamp during a lightning storm for the sake of a joke, my friend, I salute you but there are funnier ways to die.

And I haven’t even mentioned the crocodiles yet.

Also according to Wikipedia, saltwater crocodiles are “common in all waterways surrounding Darwin and are occasionally found in Darwin Harbour and on local beaches.” This tourism site says that “[m]easuring up to an average 4–5 metres in length and weighing up to 500 kilograms, Australian saltwater crocodiles are the largest and most aggressive of all crocodile species,” and “there are more of them in the Northern Territory than anywhere else in the world, so this really is the best place to see them.” Yes, but hopefully not from the inside, which is entirely possible if you are not, say, on a guided boat tour of the local mangrove swamps but rather perched naked in a tree within easy snapping range of an Australian saltwater crocodile, the largest and most aggressive of all crocodile species. As this gentleman was.

In short, it was highly unlikely that he was playing a joke, nor was it likely he had gotten stuck in the tree “after getting lost on his way to a New Year’s Eve party days earlier,” as he claimed. (Some reports suggest the latter was speculation by his rescuers, but most say he volunteered it.) Reports say he was found near “East Point,” which is an area northwest of Darwin:

I think the mangrove swamps in that area are along the coast on the north side (and probably also along the river to the southwest), based on the presence of a “Mangrove Boardwalk” in the middle of that area:

The point being that this is not at all close to anything that even looks like a home where a New Year’s Eve party might have been held, so if he was lost, he was remarkably lost. Also, I’m having a hard time seeing how someone who is lost might think, “well, maybe I parked my car over there, on the other side of that mangrove swamp.”

So you won’t be surprised to learn that he had not been at a New Year’s Eve party, but rather was on the run. Police said he had been free on bail after being charged with armed robbery, multiple aggravated assaults, deprivation of liberty and stealing, but had cut off his electronic tracking device and—the reason we’re here—tried to elude police by fleeing into and hiding in a crocodile-infested mangrove swamp. What happened to his clothes is not entirely clear; according to one report, he told his rescuers that he had used them “for bits and pieces over the way,” and if that’s Australian slang for something please let me know.

The mates loaned him some shorts, gave him a beer, and took him back to Darwin. An ambulance was waiting when they arrived, which presumably means they had a radio in the boat. But word also quickly reached the authorities, and it wasn’t too hard for them to figure out that the “New Year’s Eve partygoer in the swamp” was in fact the fugitive they were looking for. Well, they were looking for him on land, probably, because if somebody’s gonna escape, that’s the way they’re gonna do it. Once again, trying to flee by water will almost never work, basically because it will mean (1) you are in the water and (2) they are not. They’ll have a boat, or they’ll just stay on land and wait. It’s a mobility differential, basically. And this is setting aside the whole problem of potentially being devoured by something that also has a mobility advantage in water. So again I say, this is something not to do.

And by “again,” I mean we have had cases almost exactly on point here. See “Bad Places to Hide: Island in Alligator-Infested Lake” (Mar. 30, 2016) (Texas). Well, I guess the last four years haven’t been a great time to expect people to take advice from Americans. Maybe that will start to change.